Spanish doctor serving in the Donbas region under attack by Kyiv 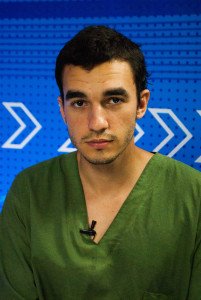 Dr. Javier Benitez arrived in Donbas from Spain one year ago as military actions in Donbas were beginning. He had just passed his final exams at medical university. He had been following the situation in Donbas and could not be indifferent to how the U.S., NATO and the EU were aiding and abetting the shellings of a peaceful population and its self-defense forces. Seeing how the Ukrainian government was trying to wipe off the map an entire region of civilians, he took the decision to move to Donbas in order to serve.

On July 30, he took the time to discuss with Novorossia Today his mission in Donbas.

Javier, when did you arrive to Donbas and what did you see?

I arrived at Alchevsk in February, 2015. My acquaintance had been there already. We began to arrange providing dinners for people, working as volunteers. We fed dozens of people every day.

Then I arrived in Komissarovka. It is a remote settlement that was not receiving humanitarian aid. People needed medicines. When I got there, there were two experienced doctors. Seeing me, they left the local hospital suddenly, leaving me with the serious responsibly to treat 200 patients.

It was very difficult to see the suffering of people who had chronic illnesses. For instance, there were not enough medicines for patients with epilepsy. I worked hard to get two packages of medicines.

Then I went to Donetsk and worked at the frontline at the airport. I provided initial medical aid for injured people’s militia. Now, I am in the military hospital of Donetsk. I’m trying to improve my skills and knowledge with the help of the modern equipment here.

Please compare the situations in Donetsk and Komissarovka.

The aid is coming mainly from Russia. My country sends only military equipment and ammunition [to Kyiv forces], like all Western countries.

What are your plans for the near future?

I miss my home, but I will try to stay here to save lives.

Dr. Javier Benitez is a Spanish doctor serving in the Donbas region which is under attack by the Ukrainian government. He publishes a Facebook page Medic in Donbas in which he reports on his medical work and his overall observations.