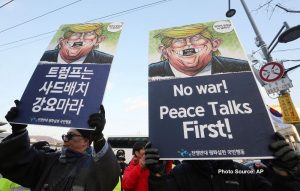 After months of mass protests that led to the impeachment of former President Park Geun-hye, South Korea now has a new administration. Where does the mass movement go from here? ZoominKorea asked labor, LGBT, and peace/reunification activists in South Korea about their expectations for the Moon Jae-in administration as well as movement priorities in this new period.

Part one, with Ju Jejun, Policy Director of the Korean Alliance of Progressive Movements

Part two, with Nayoung, Executive Director of Network for Glocal Activism/School of Feminism and is also a member of Rainbow Action against Sexual Minority Discrimination