‘Sorry’ is the gild on the sword of liberal imperialism 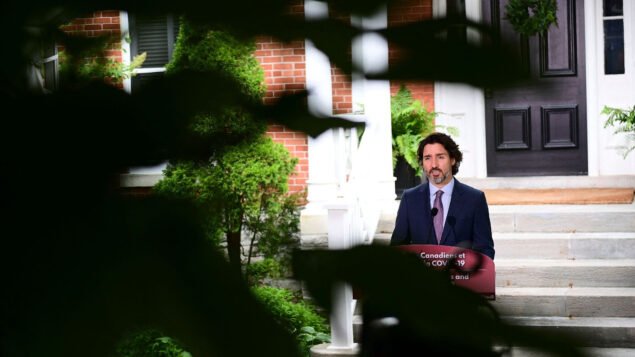 The truth is that the destruction of Canada’s First Nations and the imperial project to subjugate China, and all rising powers outside Western hegemony, are part of the same age-old liberal imperial project.

It was in March that I saw Cong Peiwu, the Chinese ambassador to Canada, being interviewed on “The Agenda with Steve Paikin.” Again and again, the ridiculous charges of a Uygur genocide and concentration camps were brought up.

During the interview, a clip of Bob Rae, Canada’s permanent representative to the United Nations, was used to show the “superiority” of the Western system. Rae admitted that there had been injustices against the indigenous people in Canada but this ability to take responsibility gives Canada the right to call out China on Xinjiang.

To this Cong replied that there is no need for a commission because there isn’t a genocide. This is also the conclusion of the Arab League, which supports China’s efforts in Xinjiang. Indeed, no matter what one thinks about China’s anti-terrorism methods, the labels “genocide” and “concentration camps” are totally inadequate.

With 751 unmarked graves recently being found at a Saskatchewan residential school site in Canada, this Western superiority complex needs to stop. However, yet again the “sorry” gambit was used to attack China. Canada’s Prime Minister Justin Trudeau has apologized and once again claimed that it is this which differentiates Canada from China and it is this which marks Canada’s right to criticize China.

The truth is that the destruction of Canada’s First Nations and the imperial project to subjugate China, and all rising powers outside Western hegemony, are part of the same age-old liberal imperial project.

The changing ideology of liberal imperialism has kept pace with the pragmaticism of empire which has sought to weaponize peoples’ emotions. Previously, a destruction of a civilization was justified through narratives of dehumanization, inferiority and barbarism.

The denial of the humanity of those that were targeted allowed for the taking of their resources and their demise. The 751 graves are just the tip of a massive iceberg that represents the lock stock annihilation of Native American cultures. 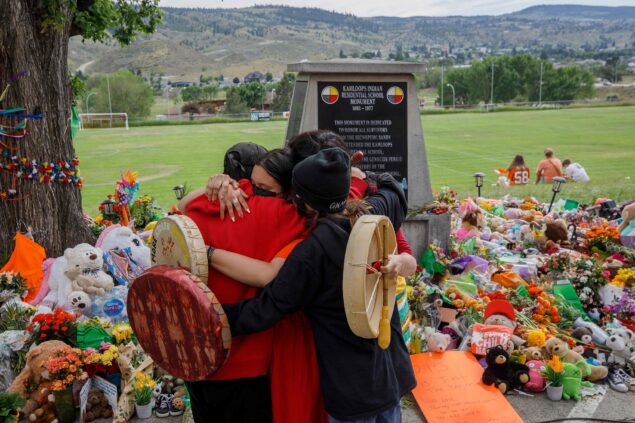 People from Mosakahiken Cree Nation hug in front of a makeshift memorial at the former Kamloops Indian Residential School to honor the 215 children whose remains have been discovered buried near the facility, in Kamloops, British Columbia, Canada, June 4, 2021. /VCG

When one’s language is gone, when one’s people are massacred, when one’s culture has vanished, when the entire American continent has been made a “lebensraum” for Western European civilization a claim of “sorry,” as a sign of moral superiority, is vacuous.

Today, neo-imperialism seeks to unite its diverse and displaced people that have been brought together through a process of slavery, dispossession, and forced migration. This is done by replacing the former racist colonial ideology with human rights ideology. Here the world must accept a liberal narrative of a “shared” Western humanity that allows the West to define the basic political-economic system of others.

Both the old racist colonial ideology and the new human rights ideology, in fact, have the same aim. They galvanize Western populaces against an enemy which then justifies imperial aggression. This is what is happening today against China.

Ironically then, the imperialism that Trudeau has apologized for is simultaneously continuing against China and much of the Global South. Let us not forget, it is also this new imperialist ideology that led to the destruction of Iraq, Libya, and Syria.

However, to be clear, Trudeau is wrong, the West doesn’t tend to say “sorry” and neither do they make amends. Where is the “sorry” for Libya or Iraq? What would a “sorry” do for the hundreds of thousands of dead in Iraq who had their country destroyed and their resources plundered based on lies? What would a “sorry” do for Libya which was once prosperous but now has open slave markets?

As such, “sorry” is merely the gild on the blade of the current incarnation of liberal imperialism which continues to be sharpened. Certainly, there won’t be a Western “sorry” for China’s century of humiliation, and neither will there be one if a new Cold War is sparked. However, considering “sorry” represents an ominous word given to people who, so dominated by liberalism, barely exist I hope the Chinese nation never hears this word.

For most of the world “sorry” is meaningless when their development is hampered and even in the West what we need most is not “sorry” but people-centered development. “Sorry” won’t make up for the trans-Atlantic slave trade, indentured labor, or former serfs cleared from their land. However, people-centered development, real action, will give those who were historically disadvantaged the education, the health care, and the social support to make pragmatic changes to change their future.

Furthermore, for the First Nations of Canada, “sorry” won’t bring drinking water to the 32 communities that today still lack access to safe, clean drinking water. What they need is the infrastructure that a wealthy country like Canada could so easily provide. Likewise, “sorry” won’t rebuild the numerous countries destroyed by Western “interventions” but transferring spending from military to infrastructure will go some way to making amends and will also help Western residents.

Keith Lamb is a University of Oxford graduate with an MSc degree in Contemporary Chinese Studies. His primary research interests are China’s international relations and “socialism with Chinese characteristics.”