How to explain Poland’s swing against the European Union? How to explain the election of the Catholic fundamentalist, authoritarian, populist, Eurosceptic Law and Justice Party to rule a booming country that has benefited from more than €130 billion in EU investment in its roads, railways and schools, a country where only a few years after EU accession in 2004 hundreds of foreign factories and distribution centres opened, employing hundreds of thousands of people, a country whose citizens have taken advantage of EU freedom of movement to travel, work and study across the continent in their millions? If Britain is straining the EU by leaving, Law and Justice’s Poland is straining it by staying, attacking the EU’s contradictory institutional positions – its promotion of human rights, its secularism and multiculturalism, its belief in state welfare, its embrace of mobile capital – with contradictory positions of its own. The typical Briton is slightly poorer now than before the financial crash, almost a decade ago; that might not be the EU’s fault, but at least there’s something to find a scapegoat for. The typical Pole, by contrast, is half as rich again.

Few at the richer end of Europe would begrudge rising prosperity for the hundred million Eastern Europeans who joined the EU between 2004 and 2007, 38 million of them in Poland. Whether or not Poland’s rise is an economic miracle, it’s an economist’s miracle, in the sense that it can, and has been, used to justify most of the mainstream non-Marxist economic currents of the past century. Free traders can claim it shows how opening up a previously closed market has expanded and enriched the European economy as a whole. Neoliberals can claim that the effects of Poland’s post-communist economic shock therapy, the mass closures of state factories and the ruthless privatisation and grievous unemployment that followed, prepared the way for the free market to come to the rescue with foreign investment and a resurgence of local enterprise. Keynesians can point to the vast amounts of public money Western Europe has poured into Poland to validate their argument that everyone gains when the state takes the lead in refuelling an economy that has run out of gas.

None of these economic ideas accommodates the triumph of Law and Justice, just as they do not accommodate Brexit and Trump. Such populist phenomena are linked by their backers’ ability to insist on the centrality of money-in-your-pocket economics to their cause, while at the same time promoting the primacy of romantic ideas of national and racial sovereignity in which, by definition, ideals come before money. The old notion of voters acting out of enlightened self-interest falls short in explaining this; but there are too many ideas, there is too much economics, in the rhetoric of the populists to say, as it’s fashionable to say, that voters are acting ‘emotionally’. The rise of Law and Justice and the Brexit referendum victory only make sense if economics and culture are seen as two aspects of a single field, whose fundamental substance is the collective psyche of voters; a field in which apparently unconnected economic and cultural abstractions (GDP, a lost empire) and apparently unconnected economic and cultural particularities (how much you get paid, the history of the building where you work) have links and relative weights that economics, and globalised consumer capitalism, struggle to measure.

Sometimes globalised consumer capitalism links communities in these two radically non-conformist EU states, links them, in that strange way of globalisation, without doing anything to bring them together. I looked at one such instance. It’s a migrant story, but of migrant capital rather than migrant labour, and as I looked into it I began to feel that the stewards of capital who seemed the obvious beneficiaries of what was going on had lost control of their own machine. They’d programmed it to seek only one thing – efficient production – and accordingly, when the machine set about its task, it attacked the largest obstacle to efficiency, the wants of its human components, blind to the fact its programmers depended on these same human wants to validate its construction. 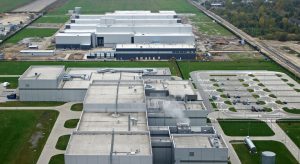 All factories must close one day, but there’s something particularly brutal about a factory being closed because its owners have found cheaper labour elsewhere. The five hundred workers at Cadbury’s Somerdale chocolate factory in Keynsham near Bristol learned on 3 October 2007 that most of their highly paid, permanent, solidly pensioned jobs were to be moved to a new factory in Poland, not because they had done anything wrong, or because their products weren’t selling, or because the factory was unprofitable, but because their Polish replacements could do the same job for less than one fifth of the money. On the day the announcement was made, the Cadbury bosses locked the workers out and posted private security guards at the site. Apparently they feared a violent reaction, but to the shocked people of Keynsham, where the lights of Somerdale had burned for eighty years, the one-day lockout looked like an attempt to project onto a guiltless workforce an act of violence that had emerged from the company boardroom.

‘They didn’t know the mentality of the Somerdale workers,’ Amoree Radford said. ‘They would have worked to the death for the factory, but the directors didn’t know that.’ She’d worked there for ten years and her daughter Jade and husband Les still had jobs there when the news came. Dave Silsbury, a Unite official at the factory, worked there for 34 years. His father had worked there; he, his brothers, his daughter and his son-in-law were employed there when it shut. ‘Cadbury was all we knew,’ he said. ‘We were institutionalised.’ He was one of the last workers to leave, haunting its near deserted production halls, packing up for the auctioneers before the final shutdown in March 2011. By that time, the production lines had been stopped, one by one, dismantled and shipped off. The Mini Eggs production line was trucked the thousand miles to the new factory in the village of Skarbimierz in February 2010. In March, Caramel and Freddo were moved to Cadbury’s Bournville plant and Fry’s Chocolate Cream went to Blois in France. In June, the Crunchie bar line and Fry’s Turkish Delight were moved to Poland, followed in September by Curly Wurly, and in December by Chomp, Fudge, Picnic and Double Decker. ‘We watched the last few Double Deckers go through,’ said Silsbury. Someone took a photo of the final Fudge to come down the conveyor.

Anna Pasternak, who worked at the new chocolate factory in Skarbimierz, noticed the age of the equipment on the production lines. The wear on the metal caused by decades of Somerdale workers’ hands was the only message the British employees sent to their Polish successors. I met Pasternak in her flat in Brzeg, the nearest sizeable town to Skarbimierz. I asked her how she felt about what had happened to the British factory. ‘I never really thought about it,’ she said. ‘We lost so many jobs here in Brzeg … We didn’t feel sorry that others lost theirs … It’s somewhere else in the world. We don’t physically know these people’…

Related news:
* U.S. army to move brigade’s worth of firepower into Poland, by Dan Stoutamire, Stars and Stripes, April 26, 2017

WARSAW, Poland — Police in Poland used force Saturday to remove a few dozen protesters who tried to block a march in downtown Warsaw by a nationalist organization celebrating its anniversary. The protesters chanted “Poland, free from fascism!” and sat down in the street as they waited for marchers from the National-Radical Camp to arrive.

Police detained and handcuffed some in the group protesting the march, since they had not obtained authorization for it. The new law regulating public gatherings was introduced by the conservative ruling Law and Justice party. Police also used force on journalists reporting about the event, pushing and even kicking them.

The nationalists’ march was directed down a different route in the Polish capital to avoid clashes with their opponents.

Every march in Poland now must be authorized or face sanctions.

Crowds gather in Warsaw for May Day march, report on pro-government Radio Poland, May 1, 2017 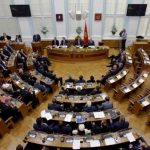 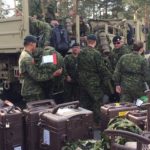