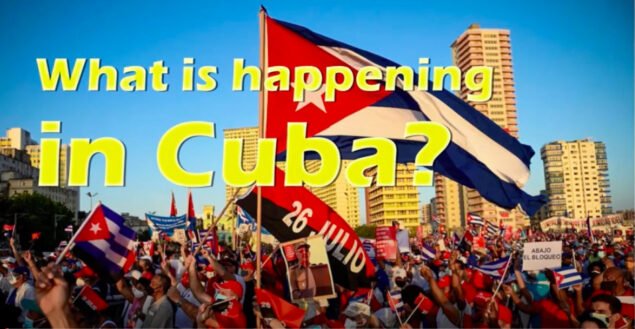 Arnold August, a Montreal-based author and journalist, spoke on the July 26, 2021 discussion, organised by the International Manifesto Group, entitled What is Happening in Cuba? Below are some follow up notes relating to his contribution.

YouTube #SOSCuba, Covert Ops, the Bay of Tweets and a critical view by Cuban highly respected communist Fabián Escalante, a former head of Cuban counterintelligence and a respected and sought-after authority by US researchers on CIA activities against Cuba.

The full article quoted by Arnold August in his July 26 presentation is now available in English thanks to Radio Habana Cuba, originally published in Spanish in CubaDebate

The following is another critical article by a Cuban communist:

Luis Toledo Sande is a Cuban writer, researcher and journalist. He has a doctorate in Philological Sciences from the University of Havana and is the author of various books in diverse fields. Former a university instructor, director of the Centro de Estudios Martianos [centre for Martí studies] and assistant editor of the literary journal Casa de las Américas. In diplomacy, he has acted as cultural advisor to the Cuban Embassy in Spain. Honours received include the Distinction for National Culture, and the Social Sciences Critics Award, the latter for his book, Cesto de Llamas, a biography of José Martí.

Fidel Castro understood the importance of unity in the revolutionary ranks, and he ceaselessly cultivated it. But, under trying circumstances, he warned that the ranks had to be prepared for the possibility that the Revolution would lose majority support. Although he knew that work was critical to prevent such a calamity, inconsistent with a social undertaking through a revolutionary program and ideals, he did not need to be the savvy politician he was to foresee the dangers that could undermine this project in a country that – again he warned – imperialism could not destroy, but that could self-destruct.

He knew the nature and of the Imperialist Power which, from the moment the Cuban nation was forged, aspired to conquer it, not to make it a thriving state of the federation established by the former Thirteen British Colonies, but to milk it as a colonial possession.

In the “least evil” scenario, when the time came, the U.S. would seize Cuba to test the developing neocolonial system.

In 1960, President Dwight Eisenhower declared the embargo against Cuba. In a notorious memorandum of April 6, that year, his Deputy Assistant Secretary of State for Inter-American Affairs, Lester Mallory, concluded that “The majority of Cubans support Castro,” and that, “The only foreseeable means of alienating internal support is through disenchantment and disaffection based on economic dissatisfaction and hardship.”

To this end, he recommended that “every possible means should be undertaken promptly to weaken the economic life of Cuba”, […] “denying [it] money and supplies, to decrease monetary and real wages, to bring about hunger, desperation and overthrow of government.”

He proposed “a line of action which, while as adroit and inconspicuous as possible,” would make “the greatest inroads” in this project. It was more crude than inconspicuous, but the inertia of habit, and a frequently voluntary blindness, made it possible for some to doubt its existence, although the blockade has been a clear tool of the United States in its desire to block the opportunities opened by the Revolution for the People and the “bad example” that the fulfillment of these opportunities would set for others.

To this end, the Northern Power not only used the blockade, but reinforced it, with armed acts, such as the mercenary invasion of Girón and bands of rebels in different parts of Cuba, along with sabotage both inside and outside the country.

One need only recall the explosion of the French vessel La Coubre with crew and other workers aboard, the downing of a civilian aircraft full of passengers, the assassination of Cuban diplomats, and bombs planted in hotels and other locations in the country. To neutralize the Cuban example, the United States also orchestrated a fake Alliance for Progress in the region, as well as armed interventions, coups d’etat and bloody dictatorships through Operation Condor.

Add on the dismantling – for reason that will not be examined here, but that must be well understood – of the Soviet Union and European socialist bloc, which had for decades provided substantial support to Cuba, and it should be no surprise that Fidel Castro, visionary that he was, would repeatedly sound the alarm regarding the dangers the Revolution had to face and overcome.

Fear of potential State repression was not the reason the disenchantment and dissatisfaction the blockade sought to create failed to erupt. Such fear could not conquer a people capable of freeing themselves from both Spanish colonization and American neo-colonization along with the dictatorial regime it supported. Furthermore, they also knew that a government that represented and defended a Revolution of the humble, by the humble and for the humble would not repress them, and that the Army and police forces are the People in uniform.

They had no reason to believe that they would fall victim to brutal acts such as those of anti-popular and corrupt regimes – e.g., Colombia and Chile, two cases close to home – to put down protests, or France, which punished protests against health measures that may have been justified, but that were imposed without sparing blows against demonstrators.

One doesn’t have to be particularly astute to know that there were no protests in Cuba against shortages because most people understood that the main causes were and continue to be the blockade put in place to provoke them. But the People are not homogeneous, and the situation can evolve and become tense.

The pandemic challenging the world is no small addition to the burden of Cubans. Cuba could not escape this tragedy. But, because it is not bound by neoliberalism or imperial designs, Cuba has been able to deal with the crisis better than most countries, including those that are more economically developed.

It is no accident that the American empire wanted to use the COVID pandemic as an ally in its grim plot against Cuba, and to reinforce it when the “bad Cuban example” was expressed as successes (e.g., the development of various vaccines) that were lauded worldwide, especially – but not exclusively – by the poorest countries. Added to this are transmission and mortality rates that, although undesirable for revolutionary Cuba, are the envy of nations like the United States, not to mention Miami, home to the worst of the hate-filled anti-Cuban mafia.

Force-fed to the point of nausea with media lies fabricated using vast economic and technological resources, the poisonous effects would be felt in Cuba. Perhaps the events of July 11 should not have caught anyone by surprise, nor should they be underestimated, even though they were the acts of a minority and condemned by the vast majority of the People.

The flames were fanned by overseas mercenaries who served the American empire, with domestic repercussions fuelled by various dissatisfactions. However, if anyone should be characterized by conscious dissatisfaction with the status quo, without being grumbling nonconformists, it should be the revolutionaries.

Not everyone has had the same experience or equally shares the perception of what the revolutionary project has meant to them. And do not underestimate the acts of elements in which these malcontents were present – and were seen. This is no fake news. The underclass has grown in Cuba, swollen by lack of discipline and civility, along with, to some extent, the crisis in authority.

Given this environment, the consensus on which unity was based has eroded. Call them either as they should be or as they wish. More important than their name is their existence. A few months ago, when a young revolutionary teacher – perhaps with excessive zeal, but with integrity spoke of ruptures in society, it seems he was somewhat misunderstood, at least by the revolutionary ranks.

Perhaps it would have been more productive to pay attention to his call to listen – and look, it should be added – to the street, a call that was not nor should have been anything new. Do we not remember the appeal of revolutionary leader Raúl Castro to keep an ear to the ground? Is it not preferable to pay possibly excessive attention than to be caught unprepared? Naiveté may be the flaw of good people, but in social matters, it can be very costly, such as failing to see danger in the midst of a pandemic. Or worse.

The events of July 11 – which neither started nor ended on that date – demand that we pay closer attention to foreign dangers, and to domestic deficiencies and their undesirable consequences, whether simple cracks, sprains, strains or fractures. If anything contributes to these deficiencies, it is the criminal imperialist blockade. We cannot slay this monster, but we can do everything in our power and more, if possible, to reverse its carnage and advance toward greater efficiency and the gentler life imperialism seeks to deny us.

Good intentions are not enough to overcome obstacles and create resources. However, lack of clarity, lack of action and torpor can be enough for imperialism to find support for its machinations. Prudence should not be confused with the torpor that can lead to paralysis or to waiting so long for the right moment that the actions needed are taken too late or under the worst possible circumstances.

If they had vacillated, waiting for the right moment, or for optimal or ideal conditions, perhaps the revolutionary vanguard of July 26 would still be waiting to attack the Moncada Barracks and Carlos Manuel de Céspedes, or to rise into the mountains. But, in the face of adversity, they seized the reins of action, making possible the triumph of January 1959 and the great successes earned since then for the good of the People. We must protect our gains.

Translated from the original published in Cuba Periodista, the official web site of the Union of Cuban Journalists (UPEC)

Wendy Holm—a panelist on What is Happening in Cuba?:

Op Ed in the Georgia Straight and reprinted in other outlets.

She writes: “Seriously?  Anyone following Cuban politics knows why calling Cuban president Miguel Díaz-Canel Bermúdez a dictator is absurd. His address to the nation (carried by BBC but not CBC) spoke eloquently to the false narrative being fed by global media.

Click here to read the article: Don’t believe all that you hear—here’s what’s really going on in Cuba 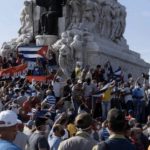 We have work to do: the threat of a U.S.-sponsored counter revolution in Cuba calls us to strengthen our solidarity with the Cuban RevolutionCuba, Nino Pagliccia 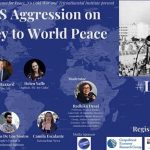 Ending US Aggression Against Cuba is Key to World Peace.Cuba, Latin America and the Caribbean, Videos and podcasts, Webinar