Solidarity vs. sanctions in the time of a global pandemic 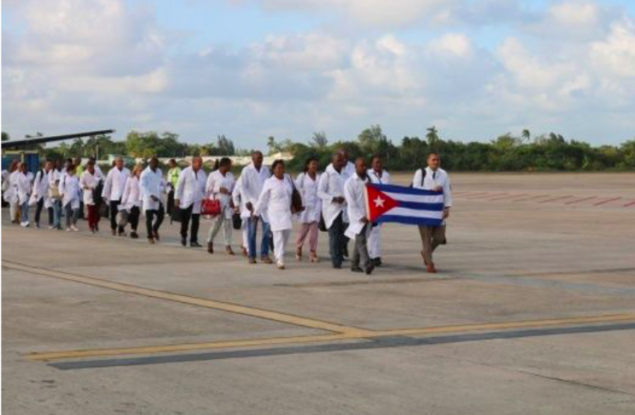 Second group of Cuban doctors arrived in Belize on March 27 to help combat the COVID-19 pandemic.

In the face of a global crisis, it has become clear that international solidarity is an alternative to rethinking the dynamics that characterize today’s geopolitics.

As the COVID-19 pandemic wreaks havoc globally –leaving more than 124,000 dead so far– capitalism has never before faced a similar threat. In the face of a global crisis, it has become clear that international solidarity is an alternative to rethinking the dynamics that characterize today’s geopolitics.

With the world immersed for almost two months now in quarantine and long-term suspension of activities, the economy has suffered one of its greatest blows, with billions upon billions in losses and millions of people facing financial uncertainty. The world’s leading international institutions warn that it could face the worst recession since the 1930s.

All this happening along with the health crisis with inefficient governments having to cope with the impact of the virus. Nations such as the United States, France or the United Kingdom face trouble after the collapse of their weakened health systems due to decades of under-funding and neoliberal austerity, showing how the neoliberal capitalist model failed in providing health and safety to the majority of the population.

Experts say that as private medical schools, private hospitals, and private pharmaceutical companies skyrocket in recent times, the public system has withered, and as a result, millions of people in the world suffer the consequences, perhaps more than the impact of the virus itself.

On the other hand, the negligence of neoliberal governments has also been seen when they oppose adopting responsible prevention policies in the face of the pandemic, placing the economic interests of the dominant groups, the transnational corporations or of themselves above the protection, care and fundamental right of life.

Amid this bewilderment, international solidarity, from countries like Cuba and China, emerges as a vital principle in the fight against the virus that also compares two state models (socialist and neoliberal) in the heart of what the crisis exposed: geopolitical dispute and its global alternatives, imperialist intervention and modes of domination in times of crises.

International solidarity vs. sanctions in light of the pandemic

If there is anything that the COVID-19 crisis has brought forward, besides the health emergency and the lack of certain public policies, has been to highlight the tense rivalry between the United States and countries that pose a threat to its imperialist model such as China, Cuba, Iran, and Venezuela.

Faced with the chaos of the pandemic, the international solidarity of China and Cuba has been, according to some analysts, key to understanding the shortcomings of the current capitalist and neoliberal system.

Chinese and Cuban doctors have been providing support in Iran, Italy, Spain and have offered their services and expertise to the most vulnerable countries in Latin America, Africa, and Europe. They have developed medicines and medical treatments such as Interferon Alpha 2B in Cuba, one of the potential medicines to combat the virus, which reduces the mortality rate of people affected by COVID19. But above all, they have offered their interest in distributing them to the peoples of the world without any patent or benefit whatsoever.

According to the activist and head of the French Association Cuba Linda, Rose-Marie Lou, Cuba’s experience in the face of the pandemic’s expansion proves what it is possible to do when there is an organized public health system and a society that is governed by principles and values ​​of solidarity and altruism, taking into account that Cuba faces the impact of the economic, commercial and financial blockade imposed by the United States for over 60 years.

According to the activist, a recent proof of Cuba’s solidarity was the reception of the cruise ship MS Braemar, a ship that sailed through the Caribbean with more than a thousand people on board, including passengers and crew, with five positive cases of COVID-19 and several travelers in quarantine, with no port in the region willing to open doors.

“Cuba will receive and provide care to travelers with coronavirus from the British cruise ship MS Braemar. We are consistent with our conviction of solidarity with humanity,” Cuban President Miguel Diaz-Canel said.

Cuba has a long history of medical cooperation and its professionals are internationally recognized for their great capabilities, solidarity, and commitment, which has been ratified in the face of the new coronavirus spread, the Washington Office for Latin American Affairs (WOLA) highlighted.

China, for its part, has sent health aid to more than 80 countries during this crisis. In the cases of Italy, Spain, Cuba, Venezuela, Iran and other countries, the Chinese government also sent doctors and infectologists specialized in treating the pandemic.

Chinese President Xi Jinping stressed that humanity is a community with a shared future and that only through unity and coordination can we all address various global risks and challenges. 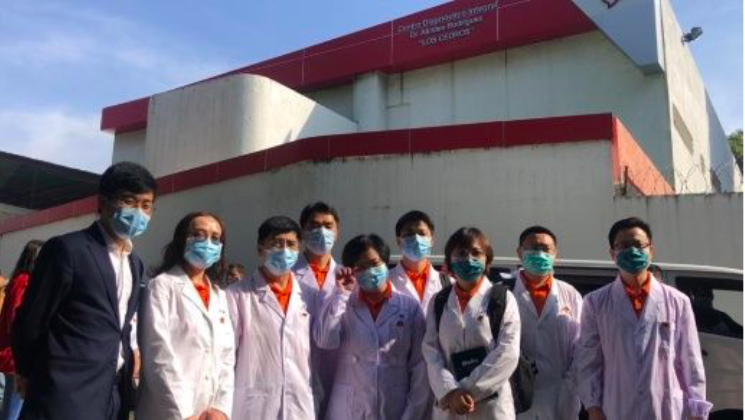 Chinese doctors arrived in Venezuela to support the fight against the pandemic.

Despite the accusations and attacks by the U.S., China has maintained diplomacy by leading international solidarity in the face of the pandemic, highlighted and recognized by the international community.

Venezuela, despite the U.S. sanctions, had recently shared part of the aid received to Caribbean countries such as Saint Vincent and the Grenadines, Antigua and Barbuda, as well as Dominica and Grenada. “To our brothers in the Caribbean, brothers with whom we share the Caribbean Sea, we have offered our solidarity,” the Vice President of Venezuela Delcy Rodriguez said.

In times of uncertainty and chaos, some experts say, most heads of government around the world resort to fear to baffle the population. Strategically they somehow manage to feed the panic for some kind of benefit.

“Panic is a natural reaction, accelerated by the general disintegration of social ties,” they say. Therefore, once the social fabric is cracked, manipulation is easier.

It is for this very reason, the idea of ​​”international solidarity” does not work for the status quo of the dominant system and its interests. International solidarity implies recognizing basic human values ​​and this is precisely something that the leaders of countries like the United States ignore.

On March 26, the U.S. government added sanctions against shipping, restriction and the chemical industry of Iran, which is now the country most affected in the Middle East by the pandemic.

According to Human Rights Watch, punitive measures have devastated the health system and hampered the ability of Iranians to access health care. Something that was already complicated before the virus hit the nation.

For his part, the Venezuelan Minister of Foreign Affairs Jorge Arreaza, in an interview with researchers from the Tricontinental: Institute for Social Research said that his country is facing “difficulties for the timely acquisition of medicines” in front of COVID-19, but that, Venezuela, like Iran, has been assisted by China, Cuba and the World Health Organization (WHO).

For economist Jeffrey Sachs, Director of the Center for Sustainable Development at Columbia University “while sanctions themselves cause tens of thousands of unnecessary deaths, the lethal damage during the new coronavirus pandemic can be much worse in countries where imports of medicines, medical equipment, as well as water, sanitation, and health system infrastructure are restricted due to the impact of United States sanctions.”

On the other hand, it is common for the U.S. government to be accustomed to let people die. In Afghanistan, thousands have died in an 18-year-old conflict that until this day has no end in sight. In the 1990s, U.S. strategists accepted that the Iraqi people would die because of the economic sanctions they were imposing. The deaths of 500,000 children there were “worth it,” then-Secretary of State Madeleine Albright said. And, sadly, U.S. foreign policy teems with examples of this behavior.

In fact, U.S. decision-making in the face of the COVID-19 epidemic and military deployment in the Caribbean under the guise of “anti-drug” combat, justly reveals the indifference and necropolitics with which Washington observes suffering and life. Thus coronavirus becomes a weapon of war since nothing can stop the United States from continuing its military and interventionist plans.

The United States has also ignored governments and international organizations such as the European Union (EU), the Economic Commission for Latin America and the Caribbean (ECLAC), U.N. rapporteurs, economists, the request of certain G20 countries, even the request of the Catholic Church’s Pope, who have asked the U.S. to lift sanctions so that nations can fight against the pandemic.

For its part, the EU recalled that all economic sanctions imposed by both the U.S. and other countries “always carry a humanitarian clause or exception” whereby sanctions are put on hold in the face of a humanitarian emergency such as that which is causing the new coronavirus.

Meanwhile, the U.S. has the highest number of deaths from COVID-19 in the world, exceeding 22,000. For the first time in the country’s history, a presidential disaster declaration is currently in effect in all 50 states. And coronavirus cases exceed more than half a million. Militarization will be a smokescreen? Activists and leaders supporting the lifting of sanctions due to COVID-19 ask.

Moreover, in the face of world economic collapse, the U.S. government avoids any criticism of capitalism, opting for criticism and attacks on China or interference in the internal affairs of other countries, as it would never touch the system it serves. Therefore, it is more productive to create chaos and to urge the international community to reject the Cuban medical brigades, for example, dismiss the top White House epidemiologist against the virus or suspend funds to the World Health Organization (WHO).

International solidarity as a geopolitical strategy makes sense amid all this complexity of factors.

To think that as the virus spreads to the most vulnerable countries in Latin America, the role played by Cuban doctors in the region becomes essential in the face of the limitations that remained in public health systems after current governments in Brazil, Ecuador or Bolivia will expel them from their territories.

Zero tolerance towards Cuba by the Trump administration and allied governments in the region ended past agreements with the Cuban government that sent medical brigades, mainly to the poorest regions in those countries, which are now fighting to face the virus, with dead people lying in the streets as happens in Ecuador.

That is why the consequences of interventionist and neoliberal policies that superimpose capital over life in times of crisis, can only have a frightening and multidimensional effect on social life, whose wounds are still hard to imagine.

The current global crisis, although it has been one of the greatest struggles the world has had to face, also aptly sums up the increasingly common feeling that the perversion of the capitalist system, once again, has failed in its entirety. It harshly presents the complexity of the problem and leaves a light at the end of the road that demands of the world only one thing: change.