Six killed, 13 wounded by Ukraine Army shelling during the past week, reports DPR 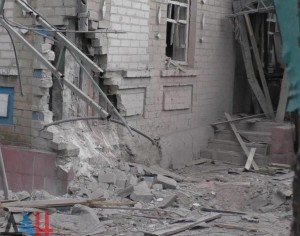 “Between July 11 and 17, 2015, six people died as a result of hostilities, among them one woman and five men. Also, 13 people were taken to hospital, among them 11 civilians and two soldiers,” the ombudswoman’s report says.

In addition to that, six people were reported missing and illegally detained between July 11 and 17. “This number includes five civilians and one military service member,” the DPR human rights ombudswoman’s office said.

TASS reports that Morozova earlier reported that the number of people detained by the Ukrainian side had reached 1,500. While prisoner exchanges have been effected between Ukraine and the rebel forces of Donetsk and Lugansk peoples republics, Ukraine has refused to include many of the political as well as military conflict prisoners it is holding. As well, the Ukraine has absolved itself from responsibility for the thousands of common prisoners held in its jails in the east of the country dating from before Kyiv launched its civil war.

On July 18, the DPR began to withdraw from the Minsk-2 ceasefire line all weapons of 100 mm caliber or less to a distance of at least 3 km. Earlier this year, under terms of Minsk-2, artillery of more than 100mm was withdrawn by both sides, though violations on the Ukrainian side are obviously continuing. Ukraine continues to heavily shell, including the northern suburbs of Donetsk and further north of the city.

In March 2015, television channel ‘Russia 24’ broadcast a 30-minute film produced by young Russian filmmakers about the effects of the war in eastern Ukraine on the people who live there. The film describes the destruction caused by nearly one year of artillery bombardments and ground attacks by the Ukrainian armed forces and militias against the people of Donetsk and Lugansk. It records the attitudes of people living there towards the country, Ukraine, and government in Kyiv that has waged war on them.

The filmmakers explain at the beginning, “People asked us, ‘Who are you? Why do you come here? Are you journalists?’ We answered, no, we are not journalists. We are here to film the truth.”