By Irina Burya, Donetsk International News Agency, May 23, 2016 (published as an exclusive on Russia Insider)

Over the past three days, intense fighting has taken place around Donetsk, both near the Yasinovatskiy checkpoint to the north of the DPR capital, and in the area of Dokuchaevsk, in a southern direction towards Mariupol.

According to the DPR Defense Ministry, the number of attacks is daily calculated in the hundreds. Over the past week, the total number of bombardments of DPR territory by the Ukrainian side reached more than two thousand, including over a thousand carried out with heavy weapons.

During the attacks, Kiev used heavy mortars, tanks, infantry fighting vehicles, armoured personnel carriers, anti-tank guided missiles, and artillery. The artillery fire in the north of Donetsk was clearly audible even in the city centre, while in Yasinovataya, according to local residents, shock waves made windows swing open.

Residents of one of the shelled outskirts of Donetsk say that the bombardment was totally unexpected. In this area, there are no positions of the DPR army, and recently it had been relatively quiet there. Despite the fact that the Ukrainian side clearly shelled innocent civilians, the OSCE observers did not arrive to document it.

On another outskirt, as a result of the direct hit by a projectile, a private home was completely burned down, but fortunately the owners were not at the premises. Two more homes there were severely damaged. The bombardment was allegedly carried out with an anti-aircraft system.

Residents of this locality say that, after the May holidays, the intensity of shelling by the Ukrainian army has dramatically increased. According to them, even last year, during the active phase of hostilities, the bombardments weren’t so numerous.

On the whole, over the past week, according to the DPR authorities, 16 houses and a granary were destroyed by shelling.

Following the shelling the suburbs of Donetsk by the Ukrainian military, the DPR army opened return fire, and on the outskirts of the city heavy fighting broke out. According to the DPR military, Kiev drove committed to the attack all types of weapons systems, including tanks and artillery. In particular, the Donetsk airport and the Yasinovatsky checkpoint were shelled with artillery. Residents of Donetsk wrote in social networks that the entire northern front was roaring and flashes were continuously appearing in the sky.

The DPR Defense Ministry reported that the fighting had resulted in three DPR soldiers killed and another three wounded.

On the western outskirts of Donetsk fighting was less ambitious. In the area of the industrial zone of Avdeevka, to the west of Donetsk, that the Ukrainian media have turned into a new fetish, a group of Ukrainian snipers tried to get closer to the positions of the DPR army. Republican snipers sent them a warning, which remained unanswered, and then opened return fire. As a result, as one of the DPR snipers wrote in social networks, the Ukrainian side lost “a sniper with a large caliber, a bunch of simple snipers and machine gunner.”

In recent days, the Ukrainian side has begun using in clashes all heavy weapons previously delivered to the front line. However, the delivery of such weapons has not stopped for a single day. The DPR Defense Ministry reports that the number of pieces of heavy equipment has increased by dozens in each sector of the front.

Over the past week alone, according to DPR intelligence, Kiev delivered to Donbass over 100 pieces of weapons prohibited by the Minsk Agreements, including infantry fighting vehicles, armoured personnel carriers, tanks, motorised artillery systems, howitzers, anti-tank systems and “Grad” MLRS’s (see below pictures of weapons mentioned). Moreover, ammunition for this equipment is now delivered to the front line not by trucks but by trains.

Accordingly, DPR intelligence sources on the ground have reported of the arrival to the south of Donetsk of a train, four cars of which contained about two thousand Grad MLRS rockets.

Residents of the Kiev-controlled territories of Donbass also continue to report of the arrival to the contact line of foreign mercenaries and nationalists of the punitive battalions.

In the south of Gorlovka, the largest city in the north of the DPR, Canadian instructors arrived, presumably representing a private military company, who were sent to the Ukrainian army to prepare saboteurs.

In the west of Donetsk, up to 400 radicals of the Aidar nationalist battalion arrived, who immediately entered into conflict with the Ukrainian military, having placed a mine, for unclear reasons, under their car. The explosion resulted in two Ukrainian soldiers being wounded, with one of them immediately rushed to hospital. When the army officers came to the battalion for an explanation, the Aidar radicals opened fire, leaving two Ukrainian military personnel dead and another five wounded.

Kiev is apparently doing everything possible to provoke the DPR army to open massive retaliatory fire, by both shelling the civilian population of the Republic and turning their own soldiers into bait.

According to DPR intelligence, last week on Ukraine-controlled territory in the west of Donetsk, a bridge over a river was intentionally blown up, depriving the Ukrainian units located there the possibility of retreat in case of shelling by the DPR.

Two days later, the DPR Defense Ministry received from an unknown e-mail address accurate data on the location of the Ukrainian military units on an adjacent sector of the front. The verification of the data confirmed their validity.

It seems as if Kiev intends to disrupt the Minsk Agreements at any cost.

Two days ago, Ukraine’s President Poroshenko called on the leaders of Germany and France to commit to an international police mission to Donbass as soon as possible.

DONi News (Donetsk International News Agency) provides English translations of the daily reports of the Donetsk and Lugansk republic’s militaries on the ongoing violations of the military ceasefire agreed in Minsk, Belarus in February 2015. Read the reports here.

Less complete but nonetheless informative are the daily reports of the Special Monitoring Mission of the Organisation for Security and Cooperation in Europe (OSCE), here. 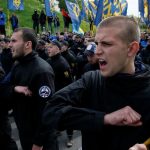 At march in Kyiv, thousands of Ukraine nationalists vow to oust Poroshenko gov’t over Donbass electionsUkraine 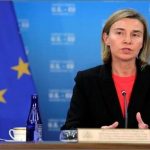 Western media lies and distorts in order to confuse the story of sanctions against RussiaRussia, Ukraine