By the middle of the week on the front in Donbass, the number of bombardments of the Donetsk People’s Republic’s territory by the Ukrainian army sharply decreased. At the beginning of the week, according to the DPR Defense Ministry, the Ukrainian military opened fire up to 1,000 times per day; yesterday  they made a bit more than 100 attacks, with no artillery used, while on Monday, July 25, about 90 artillery shells landed on the territory of the DPR.

The DPR authorities attribute this “calm” to the Contact Group meeting held in Minsk this week. It is not the first time when Kyiv pretends to be committed to the Minsk Agreements during such meetings, each time increasing the intensity of the attacks after their completion.

However, even the significantly reduced number of attacks by the Armed Forces of Ukraine resulted in casualties. The military authorities of the Republic reported three DPR soldiers dead and another two wounded. There were also three civilians wounded: a man born in 1962 in Donetsk and two residents of Kominternovo, in the south of the Republic.

According to the Republican army soldiers, the losses of the Ukrainian side in recent days were at least 15 men: 10 killed in the Donetsk area, 4 in the Mariupol direction and 3 in the Lugansk People’s Republic. The reports of the press service of the Ukrainian ‘Anti-Terrorist Operation’ headquarters contain no available information about the Ukrainian losses.

In the LPR, a group of journalists came under attack from the Ukrainian side. While they were interviewing a soldier of the Republican army, a sniper opened fire them.

The shelling by Kyiv also caused further destruction. According to the DPR authorities, over the past three days, 16 houses were damaged, mostly in Gorlovka, the largest city in the north of the Republic, and in Dokuchaevsk and Kominternovo in the south of the DPR. Most of the destruction occurred in the northern outskirts of Gorlovka, which, according to local residents, was shelled with a Ukrainian tank.

In addition, the bombardments of Donetsk from the Ukrainian positions resulted in damage to a pipeline, leaving over 500 homes without gas.

The DPR Ministry of Construction reported this week that in the two years of Ukraine’s armed aggression against Donbass, in the DPR alone there have been almost 24,000 houses and social facilities damaged.

Kyiv’s intention to destroy the Donbass infrastructure is evidenced not only by Ukrainian targeted attacks on its facilities but also by the fact that the Ukrainian side is doing everything possible to prevent their restoration.

Last week, Ukrainian artillery damaged the Donetsk water filtration plant, breaking the water supply of the DPR capital and of many surrounding localities with a total of 4,000 inhabitants. So far, the plant has not been restored because of attacks on repair crews from the Ukrainian side.

In Dokuchaevsk, the DPR authorities declared a state of emergency due to a breakthrough of the main pipeline on the Ukraine-controlled territory, resulting in more than 20,000 civilians on both sides of the front left without water.

In addition, according to the DPR intelligence, on the Kyiv-controlled territory to the north of Donetsk, Ukrainian troops blew up the dam at the lake which is a strategic water reserve storage for Donetsk, Gorlovka and Yasinovataya, a town located between the two large cities.

Kyiv also refused to give security guarantees for repairs on power lines in the Dokuchaevsk area, damaged by a bombardment from the Ukrainian side last week.

From the Mariupol direction to the south, there is little official information. However, war correspondents are bringing disturbing news of methodical shelling ongoing for several months  by the Ukrainian side using heavy artillery, mortars of all calibers, infantry fighting vehicles and tanks, with consequent large-scale destruction in nearby localities. According to soldiers of the DPR holding positions there, the observes of the Organisation for Security and Cooperation in Europe (OSCE) almost never come there to document bombardments and destruction.

Having reduced the intensity of fire for the time being during negotiations in Minsk, the Ukrainian command uses this time for the rotation of their units and supplying them with additional personnel and equipment. According to DPR intelligence, in the last few days Kyiv has delivered to the front about 80 units of equipment, including heavy mortars, motorized artillery systems, tanks, infantry fighting vehicles and armored personnel carriers. As well, ten trucks carrying ammunition have been delivered along with some 1,000 personnel, including more than 100 mercenaries from Lithuania.

The LPR Defense Ministry reports that Kyiv delivered to their sector of the front a military unit composed entirely of released convicts.

In addition,DPR intelligence reports that the West is secretly supplying Ukraine with lethal weapons. In particular, this week the U.S. Air Force brought to Kyiv an allegedly humanitarian cargo, consisting of five tons of medicines and 16 tons of small arms ammunition, namely, some two million cartridges as well as signal flares and smoke grenades.

The Ukrainian side also intensified reconnaissance operations by UAVs [drones], five of which were discovered over Donetsk only yesterday. It has sharply reduced its radio activity.

According to local residents, to the north of Gorlovka, in the area of the only entry/exit checkpoint there, the Ukrainian military is equipping a new military checkpoint, despite the fact that it is located in the “gray” area of the ceasefire contact zone. The passage of civilian cars at this checkpoint is closed; locals are allowed to pass only on foot, in small groups. Yesterday evening, the Ukrainian military opened fire at them several times from automatic weapons. As a result, queues of civilians waiting to pass in the 30-degree heat substantially increased at the remaining three entry/exit checkpoints. Yesterday, a civilian died of a heart attack at one of them.

The Contact Group meeting held this week in Minsk resulted in nothing. According to Denis Pushilin, the head of the DPR delegation, for almost two years since signing the Minsk Agreements, out of their 13 clauses Kyiv has fulfilled only one, namely, the clause on the establishment of working groups on various aspects of the settlement of the conflict in Donbas. In recent negotiations, the Ukrainian delegation did not provide even oral proposals for settlement, let alone documents adopted in Kyiv and agreed with the Republics.

The head of the OSCE Special monitoring mission, Ertugrul Apakan, announced at a meeting of the Organization’s Permanent Council that the parties had failed to implement the ceasefire, as evidenced by the constant availability and use of prohibited large-caliber weapons in the alleged “security zone”.

Locals on the Kyiv-controlled territories report that the Defense Ministry of Ukraine is creating territorial defense units consisting of 150-200 men, performing different rear functions and considered as combat reserves. Officially, these units are formed on a voluntary basis, but according to reports from the ground, the local police are forced to join them under threat of dismissal.

In the Ukrainian media recently appeared reports from the east of the country in which it is said that the Ukrainian army has advanced by three or four kilometres and soldiers are waiting for orders on a further, full-scale offensive.

Detailed information in French language on the situations in Donetsk and Lugansk is available here. 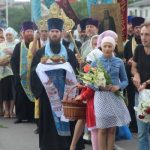 A faith that lifts barricades: The Ukraine government bows to peace procession to Kyiv, the ultra-nationalists are furiousUkraine 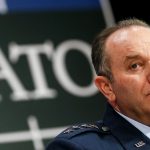