Situation report in Donetsk and Lugansk on July 25, 2016

During the past week, the situation on the front in Donbass was marked by an increase in the number of Ukrainian bombardments of the territory of the Republic with heavy weapons. According to the Donetsk People’s Republic Defense Ministry, Kyiv made more than 3,500 attacks, 700 of which were made from 122 and 152 mm weapons. 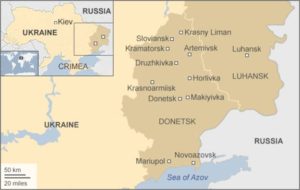 In addition, for the first time since the signing of the Minsk-2 ceasefire agreement 18 months ago, the cities of Donetsk, Gorlovka (the largest city in the north of the DPR) and Yasinovataya (located between Donetsk and Gorlovka) were bombarded during the day. As a result, even the OSCE representatives were forced to note in their report the fact of fifteen attacks on the territory of the DPR from the Ukrainian positions.

This fact was also confirmed by international observers from Germany and Finland, who had arrived in the DPR to monitor election primaries and visited the most intensively shelled districts of Gorlovka. Examining numerous destructions and interacting with the locals, who had been living under daily shelling for two years, the representatives of Europe personally heard the sounds of shelling coming from the outskirts of the city.

According to official information from DPR authorities, as a result of Kyiv’s weekly attacks, one soldier of the Republican army was killed and another wounded, as well as seven civilians wounded.

In addition, according to the DPR Defense Ministry, during the week, the Ukrainian military made more than a dozen attempts to break through the DPR Army defenses in the area of Gorlovka and Yasinovataya, and on the outskirts of Donetsk. All attempts were successfully repelled by the soldiers of the Republic. The Ukrainian assault groups were pushed back to their original positions, having lost 10 men killed and 15 wounded.

According to the latest reports, last night another Ukrainian diverse group, consisting of 12 men, attacked the DPR army positions near Donetsk. This group was almost completely incapacitated, with up to 10 of its members killed or wounded.

According to the DPR army soldiers on positions, after the massive bombardments of Donetsk and Gorlovka during the past week, they were ordered to suppress the firing positions of the Ukrainian artillery after the first round. As a result, during the past three nights heavy battles were going on along the entire front line.

Donetsk was attacked by the Ukrainian army from all directions. From the north and south, the city was shelled with heavy cannon artillery. To the west of the city, local residents heard rounds from heavy armored vehicles and saw the flash of explosions over residential areas.

The Ukrainian heavy artillery also struck at the Yasinovatstky checkpoint, while the northern outskirts of Gorlovka were attacked with mortars. From some locations came information about close-in fighting because the Ukrainian and Republican positions are too close to each other.

Another round of massive shelling brought more destruction. The DPR authorities informed that over the past week in the frontline areas of the Republic, the Ukrainian artillery fire had completely or partially destroyed 53 households. Some suburbs of Donetsk have become ghosttowns; in others, residents have long been living, winter and summer, in basements because their homes are totally destroyed.

In addition, attacks by Kyiv resulted in damage to a hospital in Donetsk, a substation, with several districts of the city left without electricity, and the Donetsk filtration plant, the work of which had been interrupted because of the bombardments four times in the past three days.

The damage to the Donetsk filtration plant left several localities with a total population of 4,000 inhabitants without water. In Donetsk, water supply to residential houses was limited to 4 hours in the morning and 5 hours in the evening for two days until the plant was restored.

In the Lugansk segment of the front, the situation is also aggravated. Together with the attempt to break through near Donetsk, the Ukrainian military tried to “test” the defenses of the LPR People’s Militia in the area of Stanitsa Luganskaya, the ‘hottest’ spot in the Lugansk republic. According to the LPR Defense Ministry, the Ukrainian assault group was pushed back to their initial positions, having lost three men dead and five wounded. 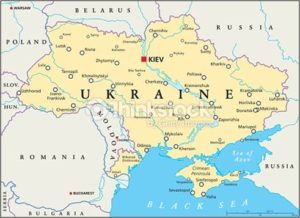 The People’s Militia soldiers at the forefront noted a high concentration of troops on the Ukrainian side of the Seversky Donets River [fourth longest in the former Ukraine at 650 km] which forms the contact line in Lugansk. According to the LPR intelligence, the Ukrainian group in this sector amounts to 30,000 to 40,000 thousand men, most of whom the Lugansk military believe to be nationalists and mercenaries. Soldiers of the republic saw the black military on the Ukrainian positions, as well as the Georgian flag near the Ukrainian one. At night, they clearly heard the movement of Ukrainian armored vehicles along the front line.

In the Donetsk segment of the front, Kyiv also continues delivering weapons and equipment to their positions. Over the past week alone, DPR intelligence found several batteries of heavy cannon artillery and motorized artillery systems, as well as position of tank and mortar units.

The OSCE observers in their weekly report documented the absence in the sites of withdrawal of over 200 Ukrainian units of equipment and weapons, including 10 MLRS “Uragan”, 8 MLRS “Grad”, 84 anti-tank “Rapira” cannons and more than 100 tanks.

The OSCE representatives also noted a “creeping” seizure by the Ukrainian military of the “grey” area, resulting in the sides’ positions in certain parts of the front separated by a few meters.

At the same time, at talks in Minsk, the Ukrainian side continues to insist on the return of control over the border with the Russian Federation before the implementation of all previous points of the agreements, such as the adoption of the law on local elections, the constitutional reform and amnesty for all parties to the conflict, none of which Kyiv has even started yet to consider.

As a result, the Lugansk and Donetsk republics have been forced to again to postpone local elections, from July to November 2016, giving Ukraine another chance to end the conflict in Donbass peacefully, through negotiations.

After the recent massive bombardments of Donetsk, residents of the capital of the DPR saw another two Ukrainian drones over the city.

According to the DPR intelligence, on July 22 in Kyiv-controlled Slavyansk, a training in bombing from MI-8 helicopters was carried out. Each helicopter dropped 50kg shrapnel-type bombs designed to destroy enemy personnel.

According to local residents, in Kyiv-controlled Stanitsa Luganskay, the military-civilian administration is spreading information about the imminent introduction of martial law.

According to the Ukrainian Defense Ministry site, a next round of large-scale, military exercises will commence on July 25 all over the country, one of the aims of which is to develop the skills of the Armed Forces in coordinating a martial law regime.

Detailed information in French language on the situations in Donetsk and Lugansk is available here.