The exploding bomb that was the British referendum and its consequences served to push the war in Donbass far into the background in the eyes of the world. Naturally, Kiev took advantage of it, having increased, by the end of the week, the intensity of the shelling of the Donetsk republic’s territory.

According to the Donetsk People’s Republic Defense Ministry, the Ukrainian side carried out attacks along the entire front line. They were most intense in the north and south of the republic, where the Ukrainian army is trying to besiege the cities of Gorlovka and Dokuchaevsk, as well as in the center, in the Donetsk area. During the attack, Kiev mainly used mortars, grenade launchers, infantry fighting vehicles, and small arms, directing mostly unsighted fire on both residential areas as well as the positions of the DPR army.

On Friday night, the Ukrainian military subjected to an intense bombardment a south-western district of the DPR capital, which for some time had been considered a rather safe part of the city. Local residents told DONi reporters that because of this fact, the attack had caught them unawares and they had barely time to hide in the basement, having counted four shells landing.

As a result of this bombardment, according to local authorities, at least five multi-storey buildings, a children’s clinic and a gas pipeline were severely damaged. Power lines were also damaged, leaving 220 substations out of order and a total blackout in three districts of Donetsk and a partial one in another two, including the centre of the city. Three mines initially lost power but were quickly connected to the emergency power supply system, allowing for miners to be brought back up safely.

In the north of the republic in the Gorlovka area, and in the south near Kominternovo, following two days of incessant attacks by the Ukrainian army, the local authorities reported of two wounded local residents and about 17 damaged houses, one of which was destroyed by a direct hit from an 82mm shell.

In addition, in Kominternovo, as a result of the damage to power lines, two children aged six and seven years old were killed when they accidentally stepped on live power lines while playing football.

The bombardments on the Ukrainian side stopped only after the DPR army opened return fire. The DPR military attacked those positions of Kiev responsible for shelling civilians and according to DPR intelligence sources on the ground, these attacks achieved their objective.

Recently, the reports of the press service of the Ukrainian operational headquarters (ATO) have not included information on losses suffered by Kiev. But Ukrainian volunteers are writing in social networks of their wounded being received at medical facilities in Ukraine. There are also reports of the loss in several units of weapons and equipment.

The ATO press service also reported that on June 24, following the massive attack on Donetsk by the Ukrainian military, Ukraine’s President Poroshenko came to the front for a sudden inspection and came under DPR return fire.

On the same day, the General Directorate of Intelligence of Ukraine published photographs showing the location of DPR weapons and equipment allegedly taken from a satellite. The military authorities of the republic stated that in addition to the fact that Ukraine has no space reconnaissance, all the photographs were in colour, as opposed to the monochrome images taken by spacecraft, leaving the source of the submitted photographs most likely being a drone.

A few days ago, in order to justify the deportation of the Russian representative to the Joint Center for Control and Coordination, the SBU (Ukraine’s security service) accused him of passing to the DPR the flight schedules and routes of the drones of the OSCE, allegedly enabling the military authorities of the republic to both move their equipment and change the location of their fixed fortifications, including trenches.

At the same time, Kiev continues to deliver to the front line equipment, arms and ammunition, the lack of which led to a slight decrease in the intensity of attacks on DPR territory at the beginning of the past week. Yesterday, residents of Kiev-controlled territories reported a train of 60 carriages and freight cars heading towards Donetsk. Locals noticed tanks and artillery on the freight cars.

Two days ago, DPR intelligence found a Ukrainian army location with a large amount of 122mm and 152mm artillery systems, located 15 kilometres from the front line,.

Kiev also continues to deliver mercenaries to the front line. In the north of the DPR, 1.5 kms away from the front line in the Gorlovka area, residents of Kiev-controlled localities reported the arrival of up to 150 Arab-looking mercenaries. To the south-west of Donetsk, DPR intelligence revealed snipers mercenaries armed with long-range rifles.

Some time ago, it was proposed on Ukrainian television to start terrorist attacks against the leaders and commanders of the people’s republic. Two days ago in Donetsk, an explosion occurred near the republic’s trauma centre when one of the most famous commanders of the DPR, nick-named “Motorola”, came there to receive medical dressing.

The law enforcement structures of the republic discovered that the explosive device had been radio-controlled. Fortunately, the explosion took place when there was no one in the courtyard of the center, thereby causing nothing worse than significant damage to the morgue building and seven cars belonging to the medical staff.

During all his meetings with Western leaders, Ukraine’s President Poroshenko says that the main condition for resolving the conflict in Ukraine is a ceasefire in Donbass. At home, the head of state adheres to a somewhat different rhetoric. On the eve of his trip to the front line near Donetsk, Poroshenko arrived at Kharkov Air Force University, where he ordered the local military to prepare to inflict an “adequate blow to the enemy”.

Two days ago, the speaker of the Ukrainian Parliament said that a bill on elections in Donbass might be submitted, and it would most likely be passed.

Donbass is tired of ceasefires during which civilians are still killed and their homes still destroyed. The head of the DPR delegation in Minsk announced that during the next negotiations of the Contact Group, the Donetsk People’s Republic would insist on the development of the mechanism of sanctions for ceasefire violations.

Situation report in Donetsk as of June 24, 2016Ukraine 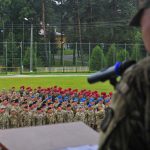