DONETSK–By the beginning of this week, the intensity of the attacks on Donetsk People’s Republic territory by Kiev declined slightly.According to DPR soldiers in positions, the high activity of the Ukrainian military remained in the south of the republic, in the Kominternovo area. There, the Ukrainian side, under cover of mortars and grenades launchers, tried to carry out reconnaissance of the DPR’s defensive firing positions, slightly changing the direction of their attacks every day.

In the Donetsk area, the central section of the front according to the DPR Defense Ministry, Ukrainian attacks were mostly carried out with mortars accompanied by a regular exchange of fire from heavy machine-guns and small arms.

The decrease in the intensity of hostilities could have been caused by a lack of ammunition in the Ukrainian army, which was confirmed by the Secretary of the National Security and Defense Council, or by high losses that the Ukrainian side had suffered over the past week. Dozens of Ukrainian wounded had been reported not only by DPR intelligence but also by Ukrainian volunteers and the medical staff of Ukrainian hospitals.

The press service of the Ukrainian operational headquarters stated that it was not the Ukrainian army but rather the nationalist battalions, beyond the control of the Ukrainian command and unauthorized to be at the front, who had suffered losses. However, two days ago, residents of one of localities on the Kiev-controlled territory reported that in a nearby holiday village, many houses had been broken into and stuffed with corpses in Ukrainian army fatigues.

It was particularly quiet in the north of the DPR, in the Gorlovka area, early in the week. The unusual silence was reported by soldiers at the DPR positions and by residents of the city that has been subjected to daily bombardments for more than a year.

However, according to DPR intelligence, Kiev all this time continued to deliver to the front line heavy equipment and weapons, including BMPs, tanks, howitzers and self-propelled artillery systems [see photos of weapons mentioned at the Russia Insider weblink above]. The amassing of the Ukrainian arms was particularly intense in the north on the Republic, which gave the DPR military authorities a reason to talk about a possible aggravation of the situation in the northern sector of the front.

The Ukrainian side resumed intense bombardments along the entire front in the middle of the week. Gorlovka came again under a massive barrage from heavy artillery and tanks; Makeevka, a satellite town of Donetsk, was shelled with self-propelled artillery systems; the positions of the DPR army in the south of Donetsk were attacked by Ukrainian infantry fighting vehicles. Even residents of the northern suburbs of Donetsk reported projectiles landing in their neighbourhood.

As a result of the attacks, according to the DPR authorities, in Gorlovka 26 houses were damaged and one burnt to the ground. Another house burned down on the outskirts of Donetsk. Fortunately, there were no civilian casualties, but two soldiers of the DPR army were wounded.

The DPR army immediately returned fire to suppress the Ukrainian artillery, destroying, according to the DPR intelligence sources on the ground, at least one ammunition depot, but unable to eliminate all the Ukrainian firing positions.

Residents of the Ukrainian-controlled localities reported that Kiev placed artillery positions within residential areas, in the hope of inviting shelling from the DPR side. Yesterday a local resident of a town located to the west of Donetsk occupied by the Ukrainian army reported that he had personally witnessed the firing of three shells from a Ukrainian self-propelled artillery system towards Donetsk, after which Ukrainian military reported on the radio that in a minute or two fire could be directed on that position. The local man barely had time to hide in the basement.

Locals from Kiev-controlled territories also note that the DPR army’s return fire falls mainly on the position of nationalist battalions. Moreover, according to them, these positions are often shelled by the Ukrainian army units as well. It looks like Kiev has actually decided to get rid of the radicals at all costs. An indirect confirmation of this is the fact that the OSCE observers refuse to document the results of the shelling of the radicals’ positions, which is a constant complaint in the social networks of the nationalists themselves as well as volunteers supplying them.

Due to huge losses, at the end of the past week the Right Sector, the only paramilitary group that never joined the Ukrainian army, announced its retirement from the operational zone. However, two days ago, DPR army soldiers recorded their presence in the area of the Donetsk airport. The day before that, in the north of Gorlovka, the nationalists opened fire from small arms on a group of journalists, despite the clearly visible word “Press” on the journalists’ clothing.

In addition, the military authorities of Ukraine announced two days ago that the ‘Azov’ and ‘Donbass’ nationalist battalions, withdrawn earlier from the front line, were to return in the operational zone.

In light of the dramatic deterioration of the situation in the north of the DPR, it is particularly alarming that at the only checkpoint of entry and exit there, Kiev began to delay the procedure for admission of civilians crossing the contact line.

In particular, according to the DPR Defense Ministry, yesterday the Ukrainian military forced about twenty civilian cars to spend the night in the neutral zone. The drivers were not allowed either to pass the control to enter the Kiev-controlled territory or go back to DPR territory. Then at night, an infantry fighting vehicle at the Ukrainian checkpoint fired several rounds at the DPR positions.

Two months ago, on April 27, the Ukrainian military shelled civilian vehicles spending the night in the neutral zone to the south of Donetsk, which resulted in the deaths of five civilians, including a pregnant woman. [Report here.]

Russian representatives to the JCCC (Joint Centre of Control and Coordination of the ceasefire) have repeatedly stated that Kiev deliberately endangers the lives of the civilian population of Donbass. Two days ago, the SBU (Security Service of Ukraine) named one of them a threat to Ukraine’s national security, as a result of which he was deported with a ban from re-entry to Ukraine for five years. 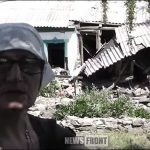