After Kiev’s unsuccessful attempt to break through the defenses of the army of the Donetsk People’s Republic in the Debaltsevo area, receiving a harsh response from the DPR, the intensity of the shelling by the Ukrainian military has declined slightly. According to the DPR Defense Ministry, the Ukrainian side opened fire on the territory of the republic mainly with mortars, infantry fighting vehicles, grenade launchers, and small arms, with single rounds from artillery.

Despite the failure of the attack, Kiev tried to squeeze everything possible out of it. The men manning DPR positions reported that the next day the Ukrainian side brought to this segment of the front journalists, including European ones, and at night the Ukrainian military went on the attack again.

Apparently they were counting on the republic to react harshly once again and enable the journalists to show to the world a barrage hitting Ukrainian army positions and, consequently, supporting the words of a Ukrainian politician that proclaimed, “Ukraine is an outpost of Europe, standing guard in front of Russian hordes.” The soldiers of the republics, however, again did not succumb to the provocation, merely repelling two staged attacks.

In addition to the provocation in the Debaltsevo area, Kiev attacked the territory of the DPR in three traditional directions: Gorlovka, in the north of the republic, Dokuchaevsk and Kominternovo in the south, and near Donetsk in the central part of the front line.

In Gorlovka, fire was opened again on its northern suburbs. Locals reported the landing of a series of Ukrainian projectiles and mortar bombs and tried to remain close to shelters.

In Donetsk, infantry battles were fought in the northern and western suburbs, but the central part of the city was relatively quiet over the weekend.

In the south, the Ukrainian side again shelled the residential areas of Dokuchaevsk. According to local residents, the bombardment was mostly carried out with mortars, with occasional rounds from heavy artillery of no less than 152mm caliber. The attack resulted in a local resident being wounded.

On the whole, over the weekend, according to the DPR authorities, as a result of bombardments by Kiev, two civilians were wounded and nine houses seriously damaged, with one of them completely destroyed.

Over the past week, the DPR Defense Ministry reported nearly four thousand attacks from the Ukrainian side, including about three thousand with heavy weapons. As a result of the bombardments, two soldiers of the DPR Army were killed, together with three civilians, including two children, and another 10 civilians wounded. In addition, the attacks resulted in two houses being completely destroyed and another 61 households severely damaged.

The press service of the Ukrainian operational command (ATO) reported dozens of attacks on their positions on the part of the DPR in the Donetsk and Mariupol directions, noting that in some segments of the front, the army of the republic had used 122mm self-propelled artillery systems and howitzers. The reports of the ATO press service included no information on casualties in the ranks of the Armed Forces of Ukraine.

At the same time, according to DPR intelligence, over the past week, Kiev lost about 20 men killed and wounded. But this was due to their own mines as a result ofthe absence within Ukrainian units of maps detailing the whereabouts of their own minefields. The total weekly casualties in the Ukrainian army in the ATO area number 80 men.

Additionally, on the same day, soldiers of the LPR army gave the Ukrainian side the body of a soldier left behind on the battlefield during the attempted breakout in the Debaltsevo area. The day before, Ukrainian volunteers reported on social networks of another three Ukrainian soldiers killed in the “grey” area whose bodies Ukrainian officers had refused to recover. It is possible that these soldiers were reported missing.

Yesterday, the military authorities of the DPR once again urged the Ukrainian military not to take part in the crimes of Kiev authorities and to come over to the side of the republics.

Locals also continue to disappear in the Kiev-controlled territories. A few days ago, it was suggested that the Ukrainian army seizes, in particular, parts of the “grey” area in order to take localities not yet plundered. According to local residents, the Ukrainian military immediately occupied the most comfortable houses, with their owners taken in an unknown direction.

The losses of the Ukrainian Army may also include the results of regular checks carried out by the SBU (Ukrainian security service) to identify Ukrainian military assisting the army of the republics. DPR intelligence reported that over the weekend alone in one of the Ukrainian units located in the Donetsk area, several soldiers were arrested without any explanation.

DPR intelligence also reported of new columns of heavy weapons and equipment delivered by Kiev to the front line consisting of heavy mortars, tanks, self-propelled artillery systems, howitzers, anti-tank cannons and “Grad” and “Uragan” MLRS’s (see below pictures of weapons mentioned). It was noted that recently in the Donetsk and Mariupol directions, a lot of tanks were evident whose numbers cannot be found in lists of the OSCE monitoring the arms withdrawn by Kiev, which suggests that Ukraine is bringing new equipment to the front.

Yesterday, Ukraine’s President Poroshenko announced that Ukraine had received from the US counter-battery radars that would soon be sent to Donbass.

Ukraine gets American radars, hopes for ‘enhanced cooperation’ with U.S.

On July 2, Ukraine received a consignment of counter-battery radars from the United States. Kiev is preparing to deploy the “cutting edge” equipment in the war-torn Donbass region, President Petro Poroshenko announced. 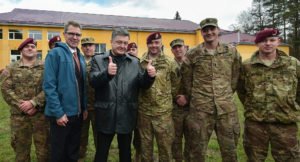 The consignment of 14 pieces of equipment includes lightweight AN/TPQ-49 and AN / TPQ-36 counter fire radars designed to detect and destroy artillery, the Ukrainian president’s website reads. The AN/TPQ-36 radar is aimed at localizing firing positions of mortars, artillery weapons and multiple-launch rocket systems. Such radars have been used by the American military for years, but are in the hands of the Ukrainian military for the first time.

With an operating range of 25 kilometers, the radars will help to detect possible attacks against Ukrainian Army in Donbas in timely fashion, allowing saving “hundreds of lives,” Poroshenko claimed during the delivery ceremony.

“Ukrainians keep their powder dry, and if there’s a threat of an offensive against us, I do not advise anyone to check how much time we’ll need to deploy our artillery and rebuff an attack of an aggressor,” Poroshenko said.

Speaking about the equipment delivery, Poroshenko stressed that “This is just a small part of military assistance that the U.S. government is expected to provide to Ukraine this year.” He added that Kiev is waiting for $500 million aid package from Washington. “We sincerely look forward to further enhancing our cooperation,” Poroshenko said, adding that Ukraine “stands for freedom and democracy of the entire European continent”.

Begging with outstretched arm for financial assistance seems to have become a tradition for current Kiev authorities. It was reported earlier that the United States had approved a $335 million aid package to Ukraine that includes providing Kiev with new military technologies. The U.S. has also trained Ukrainian troops since 2014 and provided the country’s army with defensive equipment.

With the upcoming NATO summit in Poland, the Ukrainian government hopes to receive a “comprehensive” military aid package from the alliance. Trying to heat up frenzy in the lead up to the event and apparently to secure allocation of funding, Ukraine’s Prime Minister Volodymyr Groysman claimed that it is Moscow that is acting aggressively “close to NATO borders”.

The NATO summit will be held in Warsaw July 8-9. 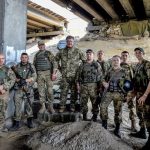 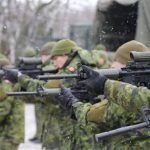