By the end of the week, the situation in Donbass could be described as relatively “calm”. The number of bombardments of DPR territory from the Ukrainian side did not, of course, decline, reaching, according to the DPR Defense Ministry of Defense, five hundred attacks a day, but they were mostly made with mortars, grenade launchers and small arms. 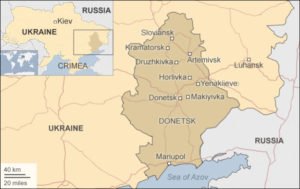 Most of the attacks were carried out by Kiev on the outskirts of Donetsk; Gorlovka, the largest city in the north of the DPR; and in the south of the Republic, in the Kominternovo area.

According to DPR soldiers in positions, near Donetsk the Ukrainian military once again moved into the “gray” area and opened fire on the suburbs of the DPR capital from mortars and infantry fighting vehicles. In response, the DPR army suppressed their firing positions. Near Kominternovo, a DPR reconnaissance group came under heavy fire from the Ukrainian side, with the Republican soldiers saying that they had not experienced shelling of such intensity for a long time.

But the largest attack was carried out by Kiev on Gorlovka over Saturday night into Sunday morning. This time, according to the Ministry, in addition to mortars, including heavy ones, Kiev used 152mm artillery. Locals reported projectiles landing even in the city center.

In the morning, the city authorities reported that four civilians had been wounded as a result of the bombardments. In addition, there were ten homes that were completely destroyed, three of which burned down; in total, about 70 households were damaged. Most of the houses were destroyed by direct hits of Ukrainian shells and projectiles.

The International Red Cross also reported that this shelling seriously damaged the Gorlovka water supply infrastructure, which is of vital importance to about two million inhabitants of Donbass on both sides of the front line.

Another house burned down during the shelling by Kiev of the south-western outskirts of Donetsk; and in a small town in the Kominternovo area, mortar fire from the Ukrainian positions resulted in significant damage to the only school in the locality.

Over the past week, according to DPR authorities, Kiev fired 3,000 rounds of various ammunition on the territory of the Republic, including about 2,000 from heavy weapons. As a result of the bombardments, three soldiers of the DPR Army were killed and another two wounded together with 11 civilians. The attacks from the Ukrainian positions also led to the complete destruction of 13 houses and damage to over a hundred households, which suggests the deliberate shelling of residential areas of the DPR towns and villages by the Ukrainian side.

Last week, the UN Office for the Coordination of Humanitarian Affairs issued a report which stated that in June 2016, a record number of people had been killed in Donbass since August 2015. According to the report, 12 persons were killed and 57 injured among civilians alone. The total number of people killed in Donbass over the two years of the conflict reached 9,500.

The DPR military authorities, based on intelligence, explain the period of relative “calm” to the redeployment of the Ukrainian army forces. Kiev strengthens daily its position, in the first place, in the Donetsk and Gorlovka direction, delivering weapons and equipment there in ready-made units.

The OSCE observers, inspecting the sites of storage of weapons prohibited by the Minsk Agreements, also confirm the absence on the Ukrainian side of dozens of mortars, 122 and 152mm self-propelled and towed artillery, tanks, anti-tank cannons and “Grad” MLRS’s. In addition, the OSCE report noted that four sites of the Ukrainian weapons storage were empty altogether.

Having visited Donbass last week, the deputy head of the OSCE mission in Ukraine, Alexander Hug, said that the number of attacks had recently tripled, and put the blame for it, as usual, on both sides.

DPR intelligence also discovered in the Mariupol area, in the south of Donbass, in the rear of the Ukrainian army, a training ground for heavy artillery of at least 152mm caliber.

In the southern direction, Kiev also delivers nationalists of volunteer battalions who, according to local residents, occupy holiday homes, motels and camps on the coast of the Sea of Azov.

In the Donetsk and Gorlovka directions in Kiev-controlled localities, the newly arrived Ukrainian military occupy the homes of local residents, the owners of which, according to their neighbours, are taken to an unknown destination. In addition, due to poor supply of the Ukrainian army, its soldiers take harvest from the locals’ gardens, depriving many of them of their only source of food.

Over the past week alone in two towns in Ukrainian-controlled territory, spontaneous meetings occurred, with locals protesting against the looting and violence of the Ukrainian military. Their main demand was for the Ukrainian military authorities to remove from their localities weapons and equipment which Kiev places close to residential houses, deliberately exposing the local population to attacks of the Army of the Republic.

In response, the governor of the Donetsk region, appointed by Kiev, announced a severe cleansing of the local “separatists” by the SBU (Ukrainian intelligence).

At the same time, the nationalists of volunteer battalions openly acknowledge war crimes in Donbass. Two days ago, the reconnaissance commander of the “Azov” regiment, openly following Nazi ideology, said on Ukrainian television that thugs and murderers, by the standards of peacetime, are often people “with a keen sense of justice”, and that it was they who “gave 95% of the result” on the front.

A little earlier, another radical from the ‘Donbass’ battalion declared on social networks that “if the ATO participants are judged according to the laws and codes of peacetime, the entire country will become the ATO zone”.

Last week, the Verkhovnaya Rada of Ukraine adopted a law exempting participants of Ukraine’s so-called anti-terrorist operation (ATO) from prosecution for crimes committed in the area where it was carried out.