Update for media on February 15, 2015, by Eduard Basurin, Deputy Corps Commander of the Ministry of Defense of the Peoples Republic of Donetsk, text translated by Kristina Rus of Fort Russ website. You can watch the media update on YouTube or on the screen below. 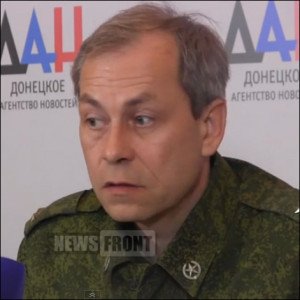 Last night and today, for the first time in a long time, the situation in Donetsk Republic remained relatively calm. Units of the DPR, in accordance with the Minsk agreements, completely halted military operations along the entire contact line at 00:00 o’clock Kiev time.

At the same time, during the night and in the morning, mortar and gun fire by separate groups of Ukrainian security forces was observed. In some cases, our soldiers had to return targeted fire to stop these provocations.

In accordance with the order of head of DPR, all DPR units are holding fire and not responding to small provocations of Ukrainian troops.

Despite the regime of silence, the situation near Debaltsevo remains tense. Ceasefire on this front did not begin right away. Blocked Ukrainian troops do not cease their attempts to come out from encirclement.

Firing of various intensity on our positions, first of all in Logvinovo, continued until the morning from the city and from Luganskoye.

Around 3 am, a large armored group of Ukrainian troops, which pulled last night to the Eastern outskirts of Debaltsevo, tried to enter Chernukhino under the cover of the night, but returned to initial position after encountering our fire.

On Mariupol front, DPR militia units held localized defensive battles, halting attempts of Azov regiment to attack Shirokhino and Kominternovo.  As a result of exchange of fire, the enemy returned to its initial positions.

We are calling on Kiev to closely follow the agreement to halt fire. On our part, we confirm our strict adherence to the agreement on the entire territory of DPR.

At this time, the engineering corps of the DPR army are demining infrastructure and residential sectors, emptied by the enemy earlier, in order to prevent the killing of civilians, who are returning to their homes. This is not only about unexploded Ukrainian ammunition, which is abundant in great numbers across our settlements, but also infrastructure objects, mined on purpose, such as substations, boilers, small enterprises and roads. At this time, they carry a clear danger to restoring peaceful life and to lives of our civilians. Therefore in the nearest time, the main efforts of our troops, which are not participating in blocking the enemy, will be focused there.

Donetsk residents who lost their housing as a result of shelling are given temporary housing in Donetsk and other settlements of the Republic.

Losses of Ukrainian security forces, as a result of clashes, over the last 24 hours are: 9 tanks, 12 BMP and BTR ([armoured personnel carriers], 16 artillery systems, 7 vehicles, 111 people killed. This data includes enemy losses prior to the ceasefire as well as data obtained by our intelligence from radio interception in Debaltsevo.

We would also like to report that we learned that the Ukrainian side is preparing provocations towards DPR. A large number of journalists, who are controlled by Kiev authorities, were spotted in some settlements. We think they want to record something that we didn’t do. We know they are planning to do this, and we will be prepared.

Today, DPR militia did not allow representatives from the OSCE to enter Debaltsevo. This was announced by Muzhenko, the head of General staff of ATO, and a representative of OSCE. Is this true?

To find out what’s going on in this area, Muzhenko better ask Semenchenko, since he said he knows everything better then everyone else. But to be serious, before coming here, I called the mission and talked to the representative of OSCE. Their answer was that today no one left in that direction. Therefore, to say that they were stopped at a checkpoint is a lie. They weren’t there. They did not go in that direction today. This is the official announcement of OSCE.

There was an announcement by the Ukrainian side that militia is not preparing for pulling out the [heavy] equipment, because the special platforms for doing so are not prepared by DPR. Is this true?

I don’t know, I have never heard about any platforms. Let them come and built the platforms. The document doesn’t say anything about any special platforms, to keep the equipment surrounded by barb wire, watch towers and security. Such announcement made by the Ukrainian side is difficult to comment on. I announced that the head of the Republic gave orders to develop a plan for pulling the heavy equipment from the contact line, with strict directions to follow the contact line as of September 19. Ukrainian forces will pull the equipment from the line as of February 15. It says that this has to occur simultaneously.

Zakharchenko: Ukraine has betrayed its troops in the Debaltsevo cauldron

We have a right to live independently, to wage independent economic politics, which was once again confirmed by the Minsk agreements. The processes that go on here basically have no relation to Ukraine in general. We have our own life. We earned this right with arms. And we continue to earn it. This is our view of the Minsk agreements, which it is not contrary to the spirit and the points signed there. 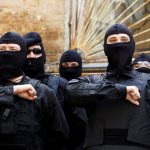