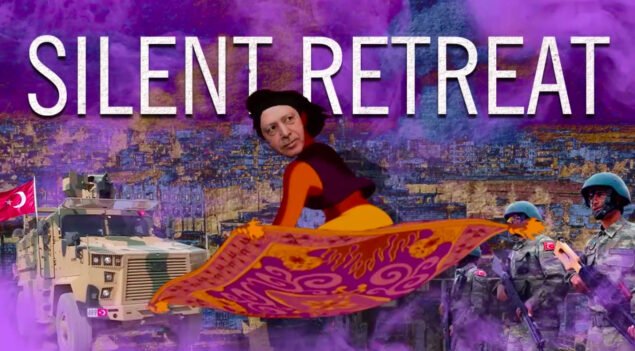 In October and the first half of November, the war in Syria remained in a relatively calm phase, which was not marked by any active military actions of the sides involved in the conflict. Nonetheless, this period demonstrated several trends that would shape the further development of the situation in the war-torn country.

In October and the first half of November, the war in Syria remained in a relatively calm phase, which was not marked by any active military actions of the sides involved in the conflict. Nonetheless, this period demonstrated several trends that would shape the further development of the situation in the war-torn country.

Despite the collapse of ISIS’ self-proclaimed Caliphate and repeatedly declared defeat of the group, ISIS cells still remain a major factor of instability in eastern Homs, southern Raqqa, in the countryside of Deir Ezzor and in the areas surrounding the US military garrison in al-Tanf. ISIS cells regularly conduct attacks on civilian and military convoys moving between Homs and Deir Ezzor as well as on patrols and checkpoints of the Syrian Army in the aforementioned areas.

For example, on November 14, ISIS ambushed a convoy of the al-Qatirji security group, which guards government oil shipments in southern Raqqa. The incident took place on the Ithriyah-Raqqa road. 5 pro-government fighters were killed. A day earlier, on November 13, ISIS blew up an oil tanker guarded by al-Qatirji group with an improvised explosive device. The al-Qatirji security group is affiliated with the al-Qatirji Company that imports oil from Syria’s northeastern region, controlled by the Kurdish-led Syrian Democratic Forces, to government-controlled areas. The company and its owners are on the US sanction list. On November 11, ISIS cells stormed SAA military positions north of al-Sukhna and blew up a local gas pipeline. The ISIS news agency Amaq claimed that 11 Syrian soldiers were killed in the attack.

The US military is present in northeastern Syria in much larger numbers than the US President Donald Trump used to think. This was an open secret since the very start of the implementation of the Trump-declared troop withdrawal. However, on November 12, this fact was openly confirmed by James Jeffrey, former Special Representative for Syria Engagement, that said that US officials routinely lied to Trump over the number of troops deployed in Syria. Currently, US sources admit that up to 1,000 US troops remain in the conflict zone. Together with military contractors and civilian specialists the real number is most likely closer to 2,000-2,500.

The south of Syria remains one of the points of instability despite the Russia-backed reconciliation efforts there. On November 12, a Tigr vehicle of the Russian Military Police was struck with an improvised explosive device on the road between al-Musayfrah and al-Sahoah in the eastern countryside of Daraa. The incident took place amid a new round of tensions between pro-government forces and former members of reconciled militant groups in the area.

The Syrian Army took control of the region and allowed the relatively moderate part of militant groups there to lay down arms as a part of a wide reconciliation agreement in 2018. However, since then, the local reconciliation process has faced several obstacles, including the resistance of a part of the local elites affiliated with militants. Together with the close proximity to the Israeli-occupied Golan Heights, this turns the province into a permanent headache for the Damascus government.

The de-escalation deal in Greater Idlib and the creation of the demilitarized zone in its south is once again stalled due to the Turkish unwillingness to break its ties with the al-Qaeda-like terrorist groups like Hayat Tahrir al-Sham and the Turkistan Islamic Party because these groups are the core of the so-called Turkish-backed opposition. This situation cannot be changed without another military operation of the Syrian Army or the Turkish will to finally start working against terrorists in Idlib. The second scenario seems unlikely as it does not go in the interests of Ankara.

Nonetheless, it seems that Moscow has not abandoned the idea to motivate Turkey for some constructive actions and during the last 2 months, warplanes of the Russian Aerospace Forces conducted a large number of strikes on infrastructure and training camps of Turkish-backed terrorists.

At the same time, Ankara has evacuated its observation posts in Maar Hattat, Morek and Sher Mughar, and started withdrawing forces from Qabtan al-Jabal and Sheikh Aqil. Most of these positions were surrounded by the Syrian Army during the previous anti-terrorist advances. This move goes contrary to the loud claims of the Turkish leadership that it will withdraw zero posts, even surrounded ones, from Greater Idlib and instead of this will force the Syrian Army to withdraw to positions behind them. This is a visual demonstration that the airstrike diplomacy efforts of the Russian side has a particular effect.

The war in Syria did not end and a comprehensive diplomatic solution has not yet been found due to the serious contradictions between the sides involved in the standoff. Nonetheless, the current format of the conflict allowed to put to an end the wide-scale military confrontations on the ground and moved the main agenda towards counter-terrorism efforts, economic and diplomatic questions.