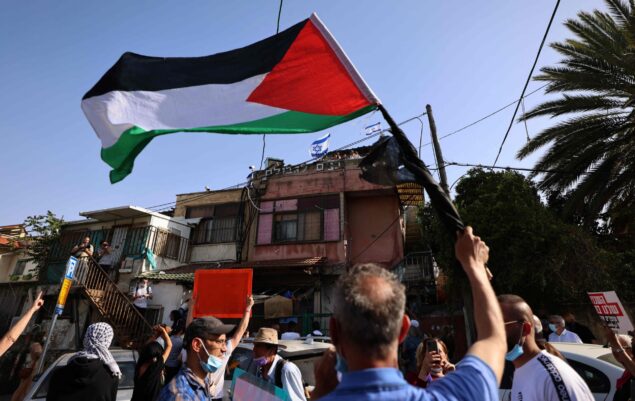 By Muna Dajani and Rasha Budeiri

For decades, Jerusalem has been at the heart of the struggle for Palestinian liberation; its fragmented and dysfunctional eastern part providing a home for Palestinian Jerusalemites since 1967, many of whom are refugees from the Nakba in 1948. For many families like ours, Jerusalem has been home for hundreds of years, but today our status as Jerusalemites is beyond precarious and our existence in the city is under threat from a settler-colonial state working systematically to expel us.

After the Nakba, Palestinians who were able to remain in the lands of historic Palestine re-implanted their roots and identity, forging a new beginning out of the catastrophe. In what came to be known as East Jerusalem, our grandparents found refuge in Sheikh Jarrah and made it their home. They exercised their right to belong again by growing their family, planting trees and becoming part of a new community. But today, that new community, just like their old one, is under the threat of expulsion by the Israeli state.

Sheikh Jarrah is a community that embodies a multi-generational experience of dispossession and displacement. It represents a common goal of protecting Palestinian identity and presence on the land. This identity is not a singular or even homogeneous one, and it is under constant reiteration and reconfiguration to adapt to intensifying acts of dispossession. For us, Sheikh Jarrah has not, and will not, replace our belonging and roots in Baq’a neighbourhood in West Jerusalem, or the other places to which Palestinians yearn to return.

Sheikh Jarrah is not a unique case. Silwan neighbourhood and the old city are two sites where aggressive expulsions and house thefts are taking place in Jerusalem. The situation extends to Palestinians cities in Palestine ’48, or modern day Israel, such as Yaffa, Lydda, and Akko. In many ways, Sheikh Jarrah is witnessing what every Palestinian community has been exposed to in the last few decades.

Although it has recently been in the news, Sheikh Jarrah is not about the last few weeks – it’s about the last 100 years. Living under a settler-colonial state, your spaces of existence shrink, becoming more and more restricted, invaded, and altered on a daily basis. This is a common reality for Palestinians in ’48 lands, in the occupied West Bank, in the besieged Gaza Strip, and for Palestinian refugees exiled in refugee camps, at varying levels of intensity and coercion.

Settler colonialism acts to make Palestinian presence on the land impossible. Its premise is to eliminate the rightful owners of the land, exercising its soft power (through laws and policy) and hard power (violence against people and place) to inflict harm in quotidian and peculiar ways. From house demolitions, land confiscation, and revocations of residencies, to the shutting down of cultural and political spaces and funding and supporting Judaisation and settlement expansion, Jerusalemites face a daily struggle to protect and shape their existence in their own city.

Growing up in Jerusalem, we remember events that left a distinct imprint in our collective memory. In 2001, Orient House – the Palestine Liberation Organisation (PLO) headquarters in Jerusalem, situated in Sheikh Jarrah – was occupied by Israeli authorities and permanently closed. We joined thousands of Palestinians as they protested its closure. The apartheid wall was under construction during that period, and we remember vividly how, on our daily journey as students to Birzeit University, we could see the wall closing our city off, one concrete block at a time. This was part of a conscious effort to create structures of segregation and entrapment. The city we grew up in and loved was being deliberately deformed.

Sheikh Jarrah itself began changing, with expulsions of families from their homes in 2008-’09 and an intensified presence of armed Israeli settlers in the neighbourhood. This brought with it surveillance cameras, private security forces, and watch towers. We started to see the space of our existence shrink with more restrictions imposed on cultural and political organisations in the city, motivated by the insatiable appetite of the settler state for more land. The clear message of all these policies and practices was that Palestinians did not have a place here.

Israel has attempted, through myriad tactics, to dilute the sense of collective belonging to the land. Yet recent events, which had Jerusalem at their heart, showed us that Israel has failed to break the bonds unifying Palestinians across borders. If anything, their attempts to separate us have made us more determined to challenge our dispossession. The ongoing uprising shows how we transcended these imposed boundaries designed to segment us and collectively formulated an identity of belonging, despite constant attempts at our fragmentation.

Sheikh Jarrah is a refugee neighbourhood that acts as a daily reminder of the Nakba, as a microcosm of its cruel and ongoing legacy. It embodies a living memory of a multi-generational refugee community that came together and refused to disappear. 73 years after the Nakba, the scenes of armed Jewish settlers and their army roaming through Palestinian neighborhoods over the past few weeks echoes with the lives lived by our parents and grandparents. They also remind us that we must never stop fighting for justice and resisting occupation.

The resilience of the residents of Sheikh Jarrah gave Palestinians – across their historic homeland, and in exile – a renewed sense of hope after decades of disappointments, frustrations, and losses. That is the kind of legacy our grandparents and parents passed down to us. Sheikh Jarrah is not just a territorial struggle for our homes. It has become a movement whose beauty and power opens an emancipatory and anti-colonial sumud (steadfastness) that is being shaped by the popular struggle taking place on the ground, led by a generation that refuses to be dragged into more years of fruitless and senseless ‘peace negotiations’.

Sheikh Jarrah has become a global cry for justice and freedom, a potent symbol and compass of our struggle. It is a beacon that we will pass on to the next generation.

Muna Dajani is an academic from Jerusalem based in the UK.

Rasha Budeiri is a media advisor from Jerusalem based in Canada.