DONETSK, April 22, 16:30 hrs – At a meeting in Minsk of the Contact Group on the matter of the settlement of the conflict in Donbass, the DPR delegation stated that the extent of bombardment of the Republic had tripled in the first months of 2016.

The shelling by the Ukrainian side continues along the entire contact line, starting daily in the late afternoon and stopping no earlier than midnight. In each segment of the contact line Kiev uses certain types of weapons.

Over the past three days, the Ukrainian military has intensely fired upon the northern suburbs of Donetsk with machine guns, grenade launchers and mortars. According to witnesses, mortar shells landed on the territory of the Donetsk airport unceasingly. The local authorities inform that in one of the localities a private home was directly hit by a large-caliber projectile. The house burned down because the fire brigade was unable to reach the area owing to the constant bombardment. The residents of this locality spent the entire night in cellars.

According to the DPR military, last night, in addition to mortars and grenade launchers, the Ukrainian army shelled the area of the airport with tanks and a number of rockets from a “Grad” MLRS. Locals reported that the blast waves made their windows crunch.

The western outskirts of Donetsk were shelled with Ukrainian self-propelled artillery. According to local residents, the time interval between a volley and an explosion was about five seconds. They say that it has been a long time since they last heard such close and frequent explosions. One night, the Ukrainian military attacked, supported by grenade launchers and armored vehicles, and also shelled the residential areas with mortars, grenade launchers and anti-air artillery. The attack was successfully repelled.

Every night in Gorlovka, an attack begins with Ukrainian snipers, small arms, machine guns and grenade launchers. According to DPR intelligence, eight mercenary snipers from Poland arrived at this segment of the front line. The skies over Gorlovka also swarm with Ukrainian drones.

At night, the Ukrainian military started to shell the northern suburbs of Gorlovka with mortars, then with tanks and artillery, obliging DPR soldiers to open return fire. The local authorities reported that as a result of the shelling, two homes burned down and over 20 were seriously damaged.

The northern outskirts of Gorlovka are also regularly fired upon from infantry fighting vehicles. As a result of one of such attack, a local woman received multiple shrapnel wounds. It happened to be her second injury during many months of the city’s shelling.

DPR soldiers in positions around Gorlovka report that they now experience an unusual trembling in the land around them during bombardment. They speculate that Kiev is now employing a new type of weapon not used before. Despite the fact that Gorlovka has been shelled almost daily since the battle near Debaltsevo over a year ago, only recently have local residents taken to hiding in their cellars at night again. They report that it has been a long time since the bombardment has been so loud.

The DPR army, with populated areas under such bombardment, has been forced to return fire. According to DPR soldiers, the bombardment of Gorlovka stopped only after they destroyed several Ukrainian guns and an ammunition store. The Republic soldiers in positions near Donetsk also report that the Ukrainian losses are growing by the hour. According to medical staff, hospitals on the Kiev-controlled territory of Donbass are crowded with ‘indusborgs’ (nickname for Ukrainian soldiers referencing the Ukrainian ‘cyborgs’ at the lengthy standoff and siege at the Donetsk airport in 2014-15) from Avdeevka, where Kiev continues to drive them into useless attacks.

Attempts by Kiev to break through in the area of the Yasinovatsky checkpoint, situated between Donetsk and Gorlovka, continue unabated. Residents of the northern suburbs of Donetsk hear clashes taking place there even during the day, their intensity increasing dramatically at night. The Ukrainian side there uses all types of weapons amassed on that segment of the front line, such as mortars, grenade launchers, tanks, infantry fighting vehicles, heavy artillery and, recently, Grad multiple rocket launchers (see photos of weaponry mentioned ,at the Russia Insider weblink above).

True to their promise, the OSCE observer mission has installed observing cameras in the areas of the most intense attacks, namely in the northern suburbs of Gorlovka and in the area of the Donetsk airport. However, according to DPR soldiers, the cameras are fixed to exclusively observe the positions of the DPR army. Moreover, DPR soldiers report of repeatedly noticing OSCE observers in the areas of the buffer zone seized by the Ukrainian military where the Ukrainians are in the process of preparing defensive positions.

Kiev appears to be seeking to stage evidence of violations of Minsk Agreements by the Doetsk and Lugansk republics in the absence of real examples. In particular, two days ago in Kiev-controlled Avdeevka, situated near Donetsk, the Ukrainian artillery [??] at the moment when it was visited by a delegation from Germany.

However, it cannot be excluded that the attack on Avdeevka was a case of another mistake by Ukrainian gunners. The lack of coordination of late between Ukrainian army commanders and the nationalist battalions in particular often leads to losses from “friendly fire”. According to DPR intelligence, two days ago near Donetsk, Ukrainian soldiers destroyed a Ural truck of one of the nationalist battalions that had apparently become lost during the night and was taken for a DPR vehicle. Nine Ukrainian soldiers were killed and over 20 wounded as a result of this incident.

The Ukrainian command continues to deliver nationalists to the front line due, as the command states, to their higher motivation to fight “separatists”. However, the DPR Defense Ministry believes that it is in actual fact foreign mercenaries that are being delivered to the front line, under the guise of Ukrainian radicals. In particular, DPR intelligence reports that three days ago a Ukrainian unit of up to 100 men arrived at the front and a part of the group spoke English only.

Recently, a resident of Donetsk wrote in social networks that the Ukrainian army was virtually killing the city. Both residents and defenders of Donbass find it increasingly difficult to understand what motivates the Ukrainian military. After all, they will not be able to intimidate those who still have not left. It seems like Kiev is collecting the last ammunition from all the warehouses, bringing it to the front, spending meager remnants of fuel, just to destroy those whom they call fellow countrymen and whom they have apparently come to “liberate” from the “occupation”.

Note by New Cold War.org: The increased Ukrainian shelling of areas of the Donetsk Republic described in the report above is corroborated by the daily report of April 22, 2016 of the Special Monitoring Mission of the Organization for Security and Cooperation in Europe. The OSCE publishes a daily report of its observation mission in Donetsk and Lugansk, here.

Canadian military aid to Ukraine in 2014 was last-minute scramble under pressure from PM, documents showUkraine 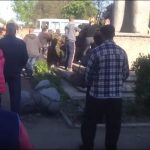