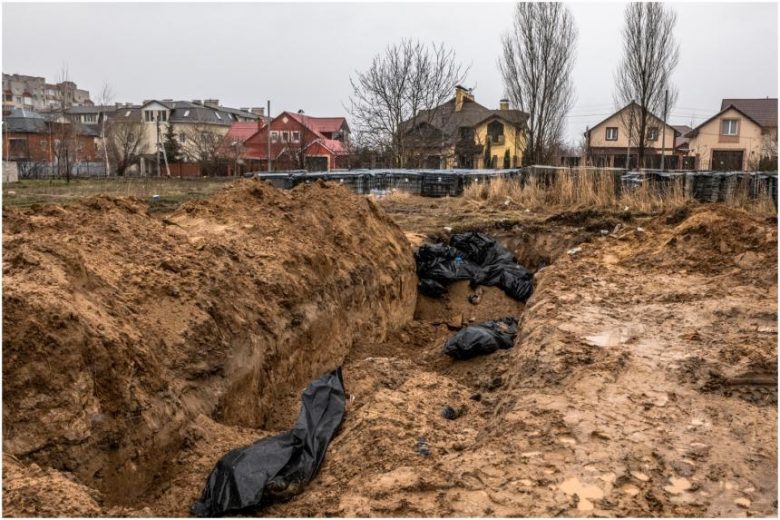 Bodies of civilians lay in a mass grave outside St. Andrew;s Church in Bucha, Ukraine, on April 3, 2022. PHOTO: NYTIMES

The massacre of hundreds of civilians at Bucha (2 April 2022), a town in the north of Kyiv Oblast, marks a critical moment in the Russian invasion of Ukraine. Late on Saturday evening a number of disturbing reports began to appear on western corporate media websites describing a series of mass killings of the civilian population by Russian forces during their occupation of the district.

The massacre of hundreds of civilians at Bucha (2 April 2022), a town in the north of Kyiv Oblast, marks a critical moment in the Russian invasion of Ukraine. Late on Saturday evening a number of disturbing reports began to appear on western corporate media websites describing a series of mass killings of the civilian population by Russian forces during their occupation of the district. By Sunday morning, this had become the most important international news item of the day — and the facts had been established; the Russians had committed these atrocities. The horrific nature of the images released by the media and the nightmarish details of how hundreds of people had been murdered — details including rape and torture — assisted the court of western public opinion to come to its quick guilty verdict.

Not everyone, however, was satisfied with this haste to pronounce a verdict. The information released by the Ukrainian media and a number of media outlets in Europe and the United States, including The Sunday Times and The New York Times, raised more questions than it answered. Russian forces, as per a recent agreement with the Kyiv government, had withdrawn from Bucha, Irpin, and Hostomel in the afternoon of Wednesday 30 March, allowing forward units of the Ukrainian armed forces to begin retaking these towns that evening and through the following day (Thursday 31 March). Anatoliy Fedoruk, the mayor of Bucha, was inside the town on 1 April where, at the town hall, he broadcast a liberation message on Facebook at half past four in the afternoon, and on the morning of 2 April The New York Times’ photojournalist Daniel Berehulak was on a tour of the streets with the ultra-nationalist Azov battalion.

At no point between the evening of 30 March and the evening of 2 April — a period of about seventy-two hours — is there a single report of a massacre. Estimates of the number of those killed vary in the media from about 200 to 400, making this an event, then, which would have been witnessed by many of the town’s residents. Yet, not a single picture, video, text message, or social media update of the crime has appeared — and this is odd, considering the vast quantity of citizen-filmed material emerging from other towns and cities engulfed in this conflict. News of the massacre — which many Ukrainian politicians are describing as a ‘genocide’ — came to the attention of the international media only after the Azov battalion and Special Forces of the SAFARI regiment had completed a ‘cleansing of the city’ in a sweep operation aimed at mopping up ‘saboteurs and accomplices of Russian forces.’ Ahead of this operation — which reads suspiciously like reprisals — Ekaterina Ukraintsiva, a representative of the Bucha council authority, had informed residents to stay in their shelters and remain off the streets during the operation. It is only after this special operation that news of a massacre reaches the Ukrainian and international media.

Almost immediately, the Russian Ministry of Defence denied responsibility for the massacre; stating that its forces had vacated Bucha, Irpin, and Hostomel on the 30 March — which we know to have been the case, and Russia made a number of requests for the UN Security Council to convene an extraordinary meeting on Monday to discuss these crimes — which it described as ‘criminal provocations by Ukrainian soldiers and radicals.’ Britain, which holds the presidency of the UNSC, refused this request, saying that the Security Council would meet as scheduled on Tuesday (5 April) for a general discussion on the situation in Ukraine. Considering that the Security Council held an emergency meeting on 4 March (2022) when it was reported that Russian forces in the south of Ukraine had shelled the Zaporizhzhya nuclear power plant, it is peculiar that a massacre is not treated with the same urgency by the international community.

Now, nothing of this is intended to make the case that Russian soldiers did not perpetrate a massacre against the civilian population of Bucha. Neither is this to deny that such an atrocity happened. Quite clearly, hundreds of unarmed civilians were murdered by military forces in the most outrageous of circumstances. But what is not known, without a thorough forensic investigation, is which military force committed these awful crimes. Russia has denied responsibility and Ukrainian authorities had control of the town for three days before a massacre was reported by the media. Russia has sought an international investigation, and its request — which it has repeated — has been denied. This raises very serious questions about the massacre, and it is the duty of the media and the journalistic community to ask these important questions and seek satisfactory answers.

This website, Standpoint Zero, and Consortium News asked these questions yesterday (4 April 2022), with Joe Lauria making the salient point that ‘the West has made a snap judgement.’ Overwhelmingly, the response from the general public on social media has been fantastic — people have at least taken a pause to think and to ask these questions. Regardless of what anyone thinks of the validity of the Russian government’s reasons for its special military operation, over the past weeks we have seen videos of convoys of Russian trucks risking attack from Ukrainian defenders to deliver humanitarian aid to civilians in Mariupol and a host of other places affected by the fighting. Arguably, this could just be a massive PR exercise, but even if so this points to Russia’s sensitivity to international opinion. Why then would it negate all of these efforts by slaughtering defenceless civilians in a massacre which was obviously going to be discovered? While the Russians may have done this, Russia has nothing to gain from targeting civilians in this war. Such a crime could only benefit the Ukrainian government, which wants to see NATO provoked enough to enter the war.

Yet, the corporate mainstream media has acted very differently to the western public at large. It has not stopped to consider the problems with the instant narrative of the Bucha massacre. In spite of UN Secretary-General António Guterres calling for an independent investigation into these crimes, Britain, the United States, and the other NATO member states have slowed the process down. The media in these countries, rather than looking objectively at the facts — of which for the moment there are very few, have simply doubled-down. Quite extraordinarily, The New York Times — which knew of no massacre before late 2 April despite being in the city — has gone to the effort of trying to rewrite the facts on the ground with satellite imagery:

An analysis of satellite images by The New York Times rebuts claims by Russia that the killing of civilians in Bucha, a suburb of Kyiv, occurred after its soldiers had left the town.

Sure, Maxar Technologies has provided the paper with images of Bucha that clearly show bodies scattered along a street. This much was visible to the photojournalist Daniel Berehulak on the morning of 2 April. Seven bodies spread out over the length of a street is not a massacre. However much this may strike us as grating, Bucha was on the frontline of a battle between two of the most modern and technologically advanced militaries in the world — of course there will be bodies. This, sadly, is to be expected in a warzone. Simply put — these satellite images have shown exactly what one would expect to see in any urban environment that has for any amount of time been the place of contact — frontline — of the warring forces. What The New York Times does not do, which a reputable newspaper should do, is look at the questions raised.

Anyone on social media yesterday would have seen the videos of the exhumations and the white armbands. Perhaps these were planted on the victims by Russian soldiers — perhaps, but maybe not. It is on record that the Azov battalion — a paramilitary organisation that has been killing Ukrainian civilians in Donbas since 2014 — was involved in a cleansing operation looking for saboteurs and accomplices. Why is The New York Times and other western mainstream media outfits not looking for the people sought by the Azov battalion and the Special Forces of the SAFARI regiment on 2 April? Did they find any? And, if so, where are those people now? These are very important questions and the same media outlets that were so quick to jump to the conclusion — without a shred of evidence — that Bucha was a Russian crime are now extremely slow to ask the most basic journalistic questions.

One does not have to be ‘pro-Russian’ or a ‘Putin apologist’ to ask these questions. Bucha is a story about ordinary human beings caught up in an awful situation. Journalism should be about seeking the truth and serving people in a healthy and informed democracy. What we know for certain is that hundreds of people have been deliberately targeted and ruthlessly and mercilessly murdered by a state actor. What we do not know is which state actor perpetrated this despicable crime — even the Pentagon has said it cannot confirm who was responsible. Whoever is responsible should be brought to account — whether that is Russia or Ukraine. It is the duty of responsible journalism to seek out the truth of what happened at Bucha and give the victims the justice that is their right. But that is not what is happening here. 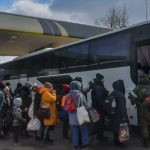 ‘The liberation of the city of Mariupol in Donbass is nearing completion’: Eyewitness reportsRussia, Ukraine 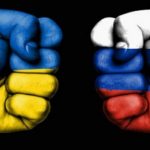 About the deep causes of the Ukrainian-Russian conflictRussia, Slava Myrolub, Ukraine