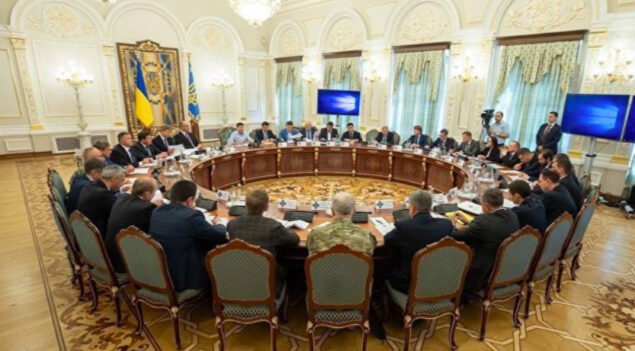 © Press Service of the President of Ukraine

Over the past 30 years, Ukraine’s independence has had two main pillars—the administrations of the United States/UK/Canada and the Ukrainian oligarchs, who defended their assets looted in the 1990s. Both these pillars have actively promoted their deputies to the Ukrainian parliament, as well as financing ultranationalist organizations and their media. This month, Dmitriy Kovalevich offers NewColdWar’s readers an exclusive analysis on how, right now, a struggle is flaring up between these two pillars.

Over the past 30 years, Ukraine’s independence has had two main pillars—the administrations of the United States/UK/Canada and the Ukrainian oligarchs, who defended their assets looted in the 1990s. Both these pillars have actively promoted their deputies to the Ukrainian parliament, as well as financing ultranationalist organizations and their media. And right now, a struggle is flaring up between the two pillars.

Zelensky’s two visits to US

In Ukrainian politics, the month of September has been marked by the two visits of President Zelensky to the United States: a meeting with Biden and a visit to the UN General Assembly. The visits took a long time to organize and the US administration postponed the meeting with Biden for several months. Nevertheless, the official Ukrainian media devoted more time to the visit than to the conflict in Donbass, presenting it as the main event in Ukraine’s politics. During his visit, Zelensky boastfully began his comments on domestic Ukrainian economic problems with the words “I am currently in the United States,” evidently considering this to be his main achievement.

In the United States, Zelensky presented a plan to transform Ukraine for the astronomical sum of $ 227 billion, which he requested from Western investors; however, what kind of project it was remained a mystery. At the request of Ukrainian journalists, the President’s Office officially announced that they had never had such a project[1]. The parliament and the cabinet had not heard of it either. In other words, during his time in the United States Zelensky just told tales, while begging for more money.

In the US, Zelensky has continued to knock on NATO doors and beg for financial and military aid. In recent years, against a backdrop of severing economic ties with the Russian Federation and Belarus, as well as de-industrialization, Kiev has been using regular Western financial assistance as a business model designed for the long-term, if not for an interminable perspective, presenting itself as a “defender” of Europe and an outpost of NATO.

Another round of “loud” statements

For this reason, the military exercises of the Russian Federation and Belarus, which took place in September, caused another round of loud statements from Kiev, Poland and the Baltic states that “Russia would attack right now”, just as it had been during similar exercises in the spring and last year. The main purpose of these statements is to attract attention and get additional funds ‘for defense.’ The Russian exercises took place, no one attacked. Meanwhile, Russian political scientists joked about this: “No, we will not attack you – live at your own expense,” “Nobody will attack you. Let the West feed you”. Even so, Kiev’s statements have had an effect—Western countries have allocated additional financial assistance for Ukraine.

One of the results of this visit was to highlight the fight against Ukrainian oligarchs. In 2014, during the Euromaidan, along with Western funds they were one of the coup’s sponsors. However, over time, they became superfluous for the Western “partners” and the struggle for a few Ukrainian assets between Western companies and Ukrainian oligarchs intensified. The United States imposed sanctions against Igor Kolomoisky, demanding the extradition of another oligarch, Dmitry Firtash from Austria. In fact, we see a redistribution of property in Ukraine and the Ukrainian oligarchs need to be neutralized, but the Ukrainian government is as much a henchman of the oligarchs as it is dependent on the mercy of the United States. In such a situation, the fight against the oligarchs is nothing short of pretense.

A special bill on oligarchs

Zelensky’s office drafted a special bill on oligarchs, which the Ukrainian parliament adopted in September. An oligarch is defined as a person who participates in political life, has a significant influence on the media, is the ultimate beneficiary of a business entity, the value of its assets exceeds UAH 2 billion 379 million ($ 84 million). There are more than 200 such people in Ukraine. Members of the National Security and Defense Council, the Cabinet of Ministers and the Security Service of Ukraine (SBU) can enter submissions on recognizing someone as an oligarch in a special register.

The individuals included in the register of oligarchs are to be prohibited from making contributions to political parties, receiving funds from the political media, and also from participating in privatization (as the new wave of privatization is to be launched to cover Ukraine’s foreign debts). Oligarchs are also obliged to sell their media. It is noteworthy that the Ukrainian oligarchs themselves gave the go-ahead to this bill and the deputies under their control willingly voted for it, sensing there to be no danger.

“Igor Kolomoisky continues to bless de-oligarchization. Get the oligarchs, enemies of the people”, – ironically commented the ‘Nedotorkani’ Telegram channel.[2]

Naturally, there are also oligarchs who are still beneficial to the US administration.

For example, Tomas Fiala is one of those who meets all the criteria of an oligarch in this bill. He is a prominent businessperson who has recently been actively buying up Ukraine’s media. This year he added the Ukrainskaya Pravda to his media pool.[3] Now, in addition to this, Fiala owns the Novoye Vremya edition and the economic websites Minfin.com.ua and Finance.ua. Its assets are estimated to be $ 426 million. At the same time, Fiala’s wealth has increased by 170 million, quite literally over the last year.

According to Serhiy Pritula, leader of the party ‘Golos’ in Ukraine’s parliament, Tomas Fiala is one of the sponsors of the Golos party.[4] However, since he is the CEO of the investment company Dragon Capital, and his investment partner is the George Soros Fund (Soros Fund Management), it is unlikely that we will see Fiala in the register of oligarchs. It is unlikely also that Viktor Pinchuk, one of the sponsors of the Golos party and the Clintons’ Foundation[5], as well as the New Leaders training program for ‘Ukrainian emerging leaders’ at the US Stanford University, will appear in the list either.

Former President Petro Poroshenko also falls under the category of oligarch. His fortune is much more than $84 million, he owns media outlets and his own political party called the European Solidarity.

First, the go-ahead for deoligarchization was given by the head of the US State Department, Anthony Blinken, during his visit to Kiev. According to Blinken, Ukraine is endangered by “external forces like Russia but also internal forces like oligarchs.”[6]

It should be noted that in the narratives of Western politicians and MSM, the term oligarch is used in an extremely negative way exclusively to businesspeople from the former Soviet countries. This term is never applied to Western billionaires, who may be lobbyists, have their own media and influence politics.

According to Ukrainian experts, it is the US State Department that is putting pressure on Zelensky, seeking de-oligarchization, but the president himself is very closely associated with the oligarchs.

“The US State Department is persuading Zelensky to cut off the oligarchs from public budget money flows, deprive them of their monopolies, the media and the ability to influence the parliament through groups of their deputies. President Zelensky publicly announced the beginning of the process of de-oligarchization, but he cannot just cut himself off from the oligarchs – his victory in the 2019 elections was possible thanks to the oligarchic consensus against Poroshenko: I. Kolomoisky, R. Akhmetov and D. Firtash played a key role in this process”, writes the Fakeoff.[7]

Zelensky’s bill on oligarchs received a negative assessment of the Main Scientific and Expert department of the Ukraine’s parliament. The parliamentary committee concluded that a large number of fundamental amendments should be made to the bill. Opposition MPs argued that the bill does not contain a detailed procedure for identifying a person as an oligarch, which creates opportunities for abuse—the selective application of the law.

The authors of the Resident Telegram channel believe that Zelensky will simulate the fight against oligarchs, and the bill should only create an illusion for Western partners.

“The bill on de-oligarchization of Ukraine will not pursue the goal of a real fight against our oligarchs who control the instruments of influence on society. It is important for the Office of the President to create the illusion of deception for Ukrainians and Western partners, and in fact continue to cooperate with the oligarchs. The TV channels will become the property of third parties and will quietly continue to belong to Akhmetov / Pinchuk / Firtash / Poroshenko / Kolomoisky, and these media will tell us about the fight against oligarchs,” the Resident reports.[8]

The West partners were dissatisfied with the “fight” with the Ukrainian oligarchs, which was sanctioned by the Ukrainian oligarchs themselves. The de-oligarchization bill has drawn criticism from Western businessmen. At the conference “Yalta European Strategy” in Kiev, a French businessman and vice president of the Havas Group Stephan Fuchs compared it to Nazi laws directed against a certain category of people.[9] A senior fellow at the Hoover Institute at the Stanford University, which trains pro-US clientele for Ukraine’s politics, historian Neil Ferguson, at the same conference, compared the bill to Soviet dispossession of kulaks in the 1930s.

In addition, the adopted bill on oligarchs contains two mutually exclusive amendments. According to one of them, the status of an oligarch is assigned by the National Security and Defense Council while according to the other – by the National Agency for the Prevention of Corruption, which already makes the law inoperable.[10]

Since the US administration requires from Kiev authorities to fight corruption and the power of the oligarchs, the imitation of this activity will be actively carried out. ‘Any of our loud statements for your money’ as Ukrainian politicians used to say. 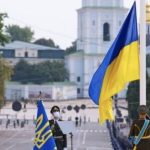 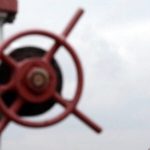