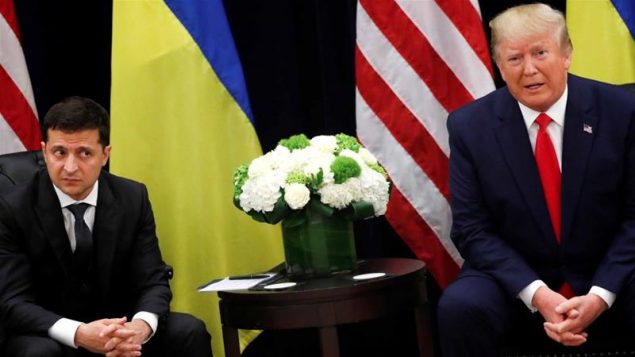 Ukraine’s President Volodymyr Zelensky listens during a meeting with US President Donald Trump on the sidelines of the 74th UNGA session in New York on September 25, 2019 [Reuters/Jonathan Ernst]

Written exclusively for the New Cold War website, our regular contributor Dmitriy Kovalevich discusses several significant events that have taken place in Ukraine during the month of September and how they impact nationally and globally.

In Ukraine, the month of September has been marked by a further concentration of power in the hands of the new president. Following July’s parliamentary elections, the newly organized president’s party Servant of the People has won the parliamentary majority and the right to form the Cabinet of Ministers. However, in September the president decided also to dissolve the Central Electoral Committee (the body, responsible for elections and referenda), which was only formed in September 2018, for the next seven years. Accused of political bias, the Committee was dissolved [1]. Ukrainian experts have explained [2] this development as preparations for local elections in 2020 and possible referenda on the status of the seceded Donbass. This decision has caused discontent among Ukrainian nationalists as they realize that the majority never supported their agendas and are likely to consider any referenda as a ‘betrayal of the Ukrainian case,’ in terms of how they refer to the nationalist agenda.

The next move towards the concentration of power is being expressed through the struggle for the control of the Interior Minister, since its chief, Arsen Avakov, remained in office following the change of ministers. He actually controls many neo-Nazi battalions, even though the disbanding and disarming of these battalions is one of the terms of the Minsk peace agreements. The neo-Nazi battalions still fight against Donbass rebels, in addition to the Ukrainian regular army, while remaining completely beyond the country’s law and constitution. In 2018, the Ukraine authorities made a public statement regarding the withdrawal of these paramilitaries; however, as recent developments have proved, they are still at the frontline. In mid-September this year there was a further announcement [3] regarding the disarming of three paramilitary battalions: 1) The Sheikh-Mansour battalion, which was formed in Denmark in 2014 out of Chechen Islamists and fought for ISIS in Syria, subsequently moved to Ukraine; 2) The OUN battalion (Organization of Ukrainian Nationalists) – the formation of Ukrainian fascists who pretend to be inheritors of Ukrainian OUN fascists from WW2; 3) The 8th battalion of Ukrainian Volunteers’ Army ‘Aratta’ – a formation of the Right Sector – the members of which consider themselves to be true Aryans.

What is suspicious about their demilitarization is that they willingly handed over their arms and held a joint press-conference with police chiefs, while calling each other ‘friends’. The police then claimed that their arms would, in any event, be used against the ‘aggressor’ (the term they use when referring to the Donbass militias), while the ‘disarmed’ battalions relinquished only a small proportion of their armaments, while remaining at the frontline as ‘battalions of territorial defence’. Actually, this cannot be described as disbanding and complete disarmament. Instead, we see a deception for the benefit of western observers (who have demanded the disarmament of neo-Nazis) prior to the next round of the Minsk negotiations. As a matter of fact, the neo-Nazi and Islamist battalions have remained armed and deployed close to the frontline, while the surrendered arms have been pledged for use in future combat. Moreover, the previously mentioned paramilitaries are not the only ultranationalist formations – others have simply been formally incorporated into the army, police or National Guard (like the notorious Azov regiment), while in reality enjoying total independence of action. This independence is especially revealed in their marauding and torturing of suspects and the regular fires in the cities of Donbass, as well as numerous violations of all proclaimed ceasefires.

In September, Ukraine’s delegation at the Minsk talks refused [4] to sign the Steinmeier’s formula, as proposed by the former German Foreign Minister Frank-Walter Steinmeier in 2015, to establish peace in Donbass. Since 2015, Kiev has regularly agreed in theory to the proposed peace formulas but has failed to implement them in practice because the proposed peace formulas means making several concessions to the Donbass republics, such as self-rule or autonomy within Ukraine. This is unacceptable for Ukrainian nationalists, as it does not allow them to impose their nationalist agendas in Donbass and attempts to impose the agendas by force in fact sparked the conflict in 2014. Traditionally, Kiev agrees to peace at international meetings but fears the pressure from domestic far-right nationalists who demand that war is waged until the ‘final victory’. Thus, without establishing control over these far-right nationalist gangs, there will be no peace in Ukraine.

At the UN General Assembly on September 25th, Vladimir Zelensky produced [5] a bullet which he said was the one that killed Vasyl Slipak, a Ukrainian opera singer. Zelensky claimed that this death was the result of ‘Russian aggression’. Even so, he failed to mention that the OSCE mission observing the war zone never saw any Russian military units. He also neglected to mention that Vasyl Slipak [6] was not just an opera singer but also a volunteer in the Right Sector battalion – the same extra-legal paramilitary formation still acting in Ukraine. As an ultranationalist, he took up arms to fight against Donbass rebels in the civil conflict and was killed at the frontline by a sniper. This is quite an expected outcome for anyone participating in an armed conflict – when people come to fight in a war, they can get killed.

Zelensky’s visit to the US was also marked by a scandal regarding his conversations with Trump. US Democrats demanded the disclosure of the transcript of a telephone conversation between the two men as they suspect that Trump pressed Zelensky over the Hunter Biden’s case. We had in Ukraine a minister of ecology called Nikolai Zlochevsky [7]. He is also an owner of the Burisma gas company, which extracts gas in Ukraine, is registered in Cyprus, and violates ecological norms. As a minister, Zlochevsky issued for his own company (for himself) the licenses to extract gas, actually buying up gas fields for nothing (there are some in Ukraine but relatively small). Following his resignation in 2014, he fled to London and a criminal case was opened against him in Ukraine for tax evasion. So, the former minister and corrupt gas baron invited some influential western politicians onto the executive board of his company Burisma Holding: Hunter Biden, son of Joe Biden who spoke at length about ‘fighting corruption’ in Ukraine. This job was a cushy number – Hunter Biden received as much as $166, 000 per month for actually doing nothing, but the corrupt company was free from prosecution. As reports [8]. The Hill, U.S. banking records show Hunter Biden’s American-based firm, Rosemont Seneca Partners LLC, received regular transfers into one of its accounts — usually more than $166,000 a month — from Burisma from spring 2014 through fall 2015, during a period when Vice President Biden was the main U.S. official dealing with Ukraine and its tense relations with Russia. They also hired Devon Archer, a close friend of John Kerry’s son, former US state secretary, as well as Alexander Kvasnevsky, the former Polish president. Appointing these people to the executive board and paying them money, served as a guarantee that the company could and would continue to work in Ukraine and violate ecological norms. And, assuredly, all of them spoke about the ‘fight against corruption’. These tactics worked: as Joe Biden admitted [9], he pressed the former Ukraine’s government, demanding the removal from office of the General Prosecutor Victor Shokin, who had investigated the case of Burisma Holding. In turn, Shokin has claimed that the US vowed to ‘freeze’ a $1 billion loan if the investigation did not cease.

Inside the Ukrainian government this scandal has launched a conflict between pro-Dem Ukrainian politicians and pro-Trump ones. Vladimir Zelensky currently faces a difficult task in order to side with a certain US camp and, as Ukraine has become a de facto dependant on the US and its financial aid, the choice is going to be really hard. If Zelensky sides with Trump, Democrats may block financial aid for Ukraine. If he sides with Biden, then Trump may block the aid. But without financial aid from the US and the IMF, Ukraine will not be able to pay its foreign debts. Ukrainian experts say that Zelensky will try to play for time, promising to investigate the case, while in reality doing nothing.

At home his position is still strong – his popularity in the country has not decreased but this may change with time, especially in the event of new economic troubles and the ineptness in dealing with the far-right terror.

Thus, Kiev appears to be in a very awkward position both on the domestic and international stage. The weakness of new Kiev president makes him an object of manipulation by Ukrainian far-right armed groups and US politicians alike, who are using Ukraine in their rivalry. This weakness will most likely lead Kiev to choose playing for time and regular delaying tactics when making any crucial decision. It would appear that Ukraine’s new president and his team are only now beginning to realize that ruling a country is not an easy job.