The following address was delivered by Selahattin Demirtas at the Ankara Airport on August 21, 2016 as he was departing to join mourners of the August 20 terrorist bombing of a Kurdish wedding in the Turkish city of Gaziantep. 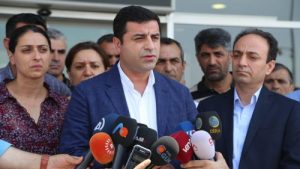 This vicious attack is not the first atrocity that we have encountered or that has befallen us in our country. The bombings and mass murders that started with the June 2015 attack on HDP Diyarbakir rally [June 5, 2015] and continued with the Suruç massacre [July 20, 2015] went on in many cities of Turkey, causing many civilian deaths. Unfortunately, these attacks have virtually determined our political and social agendas and life over the last one and a half year.

There also was the massacre at Ankara Train Station [October 10, 2015] All of these were massacres carried out by similar circles with similar goals and aims and unfortunately with very painful consequences. Much has been said and written about these massacres. Certainly, the pain hurts those closest to the dead the most, and this massacre would go down in history.

But if we are to talk about this massacre, if we are to utter words that would end the pains leading the country into a pool of blood, now is the time. This is the time to condemn that mentality, that darkness which sought to make a massacre out of a wedding ceremony.

The massacre in Suruç took place at an historically critical juncture, in critical days, critical hours. The massacre at the Ankara Train Station took place while the country was in the midst of historically critical processes. In the same vein, just as we were on the brink of another historical development yesterday, the same forces, the same gangs took action. It is necessary to remind that the murder of two young policemen in their sleep in Ceylanpınar in the wake of the Suruç massacre was a well-calculated scenario to trigger a war and it was successful. Unfortunately, it was successful.

For over a year now, armed clashes in the context of the Kurdish issue have restarted and the country has turned into a pool of blood. On October 10th, 2015, the day KCK was going to declare a ceasefire, which was known all around, they managed to achieve their evil success by carrying out that massacre in Ankara. Calls for ceasefire were lost in the chaos and blood bath of that day. Yesterday, KCK once again issued a declaration indicating an inclination to open a gate to a cease-fire and political solution (for the Kurdish issue). [Kurdistan Communities Union declaration here.] And today in Gaziantep, a similar massacre took place. None of these are coincidental and neither the targeted population nor the location is randomly chosen.

First of all, I would like to make this sincere call to the government. We have underlined this in relation to Suruç and other massacres as well. There are forces that have embedded themselves within state institutions. This fact revealed itself in a very painful way on the night of 15 July [the attempted military coup of July 15, 2016]. There are forces embedded within the state who do not want us to talk to each other, to make peace with each other. They have no allegiance to the state or the people. These circles cause all sorts of security and intelligence weaknesses to play us off against each other. Here is our call to and expectation and request from Mr Prime Minister: You should immediately launch an investigation about all those who caused security and intelligence defects by not properly investigating previous massacres in Suruç and other places.

The massacre in Gaziantep yesterday, too, points to a security and intelligence defect. If we do not go [against] these forces properly, their “boldness” and “courage” can go as far as bombarding the parliament with tanks and cannons. They want to create a country where people cannot become partners in joy and grief, partners in wedding and condolence ceremonies. Yes, yesterday they targeted the Kurds in Antep. The people they murdered were HDP members. The wedding was that of an HDP activist.

The message they want to convey is very clear. They are in active search of generating a civil war, chaos out of this situation. I want to make the following call to all my fellow citizens, to all my brothers and sisters: The best way of taking revenge from these mass murderers, these savages, is to lead the country to peace. There can be no bigger revenge. Guiding the country to peace and calm would be the best response to these villains.

Come, let us all engage in an effort, in work to share, to connect our pains. Let’s first begin to make our weddings together, our funerals together, let’s join our pain and condolences. Moving from there we can join our hearts. And let’s show the whole world, friend and foe, let’s give a message to those who want to play games with us: We can sit and talk to each other within the framework of building an equal, just and free future. Let’s show this to the whole world.

Of course, it is not very easy to talk on such a pain-filled day. But this is the answer we give to those who targeted our party members, Kurds in Gaziantep for the possibility of inciting a civil war. There is no food for these jackals in HDP. We will never be involved in any stratagem that might lead our country to civil war, ethnic strife or sectarian war; we will never tolerate anything of that sort.

And I would like to make the following call to all political leaders: Let’s unite in condolence. Let’s stand side by side in the condolence ceremony. This is our funeral; it is not mine or yours. From here I call on all my fellow deputies in Gaziantep; to AKP, CHP, MHP deputies, Come, let’s stand side by side in condolence, let’s connect our pain. Let’s first show those who turned our wedding into a funeral, into a pool of blood, that we are all together in this. The rest will come easily, none of our problems are impossible to solve. Let’s start out saying all the funerals and weddings of this country are ours. If they want to give us a message with this massacre, let’s reverse this message. This is the only way for us to overcome these difficult times.

Our people should claim this pain and funeral, but they should be very vigilant and sensitive about all these provocative games. There will be many who would try to twist the knife in this wound as long as it remains open. Do not pay attention to such calls. No call that would lead you into chaos is a friendly call. No call that would lead you into war, into ethnic war, is a fraternal call. This is our call to our fellow party members, Kurdish people, and our friends.

And our political opponents should know this well: We will not respond to those discriminating against us, those who try to exclude us, with the same language and attitude. It is the task of us all to correct these shortcomings and mistakes, these deficiencies in politics. Now is not the time to act upon motives of revenge, retaliation or blood feud. We wish the greatness of this pain and trauma to transform into a hope for peace, a gate to peace building. This is the way to prevent all that which may follow. Otherwise they will turn our country into a land like Syria, where big massacres take place and people get used to them.

Let’s condemn once again this barbaric massacre together, and show the whole world that we will not bow down before this barbarism, this army of rapists that calls itself IS, who have nothing to do with Islam or humanity, and who can in no way be related to these lands, this culture, and this faith. Let’s stand side-by-side against IS, against violence. Starting out from here, let’s give a message against IS-made barbarism and terror. You’ll see that the rest will readily follow, if we can do this. Nothing is easier than solving our problems through dialogue and negotiation. Let’s not venture into that which is more difficult, that which makes life harder for us.

Once again I would like to express my condolences to all our people. I invite all to share this common condolence, this common pain. I extend my condolences to our families and all my brothers and sisters who lost their loved ones. May God have mercy on our martyrs. And I wish speedy recovery to all the wounded. 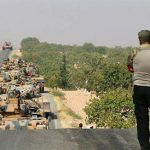