By Nick Turse, published on TomDispatch, April 27, 2017  (with introduction by TomDispatch publisher) 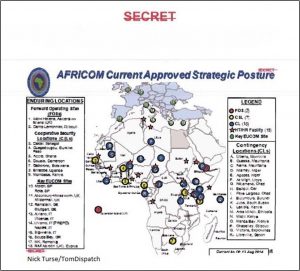 A map of U.S. military bases across the African continent in 2014 from declassified AFRICOM planning documents (Nick Turse, on TomDispatch)

General Thomas Waldhauser sounded a little uneasy.  “I would just say, they are on the ground.  They are trying to influence the action,” commented the chief of U.S. Africa Command (AFRICOM) at a Pentagon press briefing in March, when asked about Russian military personnel operating in North Africa.  “We watch what they do with great concern.”

And Russians aren’t the only foreigners on Waldhauser’s mind.  He’s also wary of a Chinese “military base” being built not far from Camp Lemonnier, a large U.S. facility in the tiny, sun-blasted nation of Djibouti.  “They’ve never had an overseas base, and we’ve never had a base of… a peer competitor as close as this one happens to be,” he said.  “There are some very significant… operational security concerns.”

At that press conference, Waldhauser mentioned still another base, an American one exposed by the Washington Post last October in an article titled, “U.S. has secretly expanded its global network of drone bases to North Africa.”  Five months later, the AFRICOM commander still sounded aggrieved.  “The Washington Post story that said ‘flying from a secret base in Tunisia.’  It’s not a secret base and it’s not our base… We have no intention of establishing a base there.”

Waldhauser’s insistence that the U.S. had no base in Tunisia relied on a technicality, since that foreign airfield clearly functions as an American outpost. For years, AFRICOM has peddled the fiction that Djibouti is the site of its only “base” in Africa. “We continue to maintain one forward operating site on the continent, Camp Lemonnier,” reads the command’s 2017 posture statement.  Spokespeople for the command regularly maintain that any other U.S. outposts are few and transitory—“expeditionary” in military parlance.

While the U.S. maintains a vast empire of military installations around the world, with huge—and hard to miss—complexes throughout Europe and Asia, bases in Africa have been far better hidden.  And if you listened only to AFRICOM officials, you might even assume that the U.S. military’s footprint in Africa will soon be eclipsed by that of the Chinese or the Russians.

Highly classified internal AFRICOM files offer a radically different picture.  A set of previously secret documents, obtained by TomDispatch via the Freedom of Information Act, offers clear evidence of a remarkable, far-ranging, and expanding network of outposts strung across the continent.  In official plans for operations in 2015 that were drafted and issued the year before, Africa Command lists 36 U.S. outposts scattered across 24 African countries.  These include low-profile locations—from Kenya to South Sudan to a shadowy Libyan airfield—that have never previously been mentioned in published reports.  Today, according to an AFRICOM spokesperson, the number of these sites has actually swelled to 46, including “15 enduring locations.”  The newly disclosed numbers and redacted documents contradict more than a decade’s worth of dissembling by U.S. Africa Command and shed new light on a constellation of bases integral to expanding U.S. military operations on the African continent and in the Middle East…

Read the full article and view the related charts at the original weblink above.

The year of the commando: U.S. special operations forces deploy to 138 nations, 70 per cent of the world’s countries, by Nick Turse, TomDispatch, Jan 5, 2017 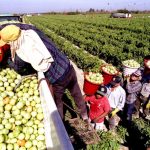