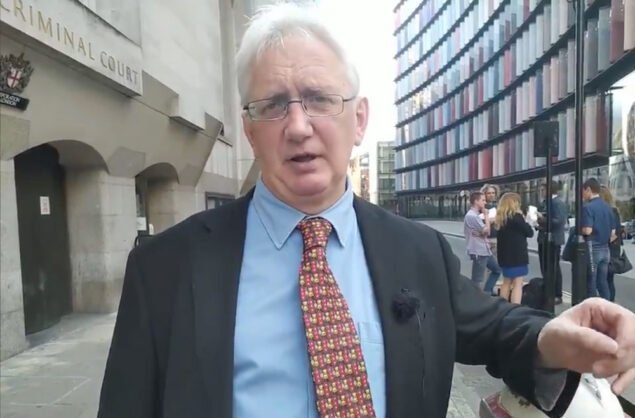 Whistleblower Craig Murray, who was convicted over blog posts and faces prison, has suffered a defeat at the High Court of Justiciary in Scotland.

In the United Kingdom, diplomat-turned whistleblower Craig Murray suffered a defeat at the High Court of Justiciary in Scotland on June 8, when three judges refused to grant him permission to appeal their earlier decision to convict him of contempt of court for his blog posts on the trial of former Scottish First Minister Alex Salmond.

Murray plans to challenge the High Court’s refusal and seek permission from the UK’s Supreme Court for an appeal.

The three-judge panel determined in March that some of Murray’s reporting during Salmond’s trial could have resulted in certain members of the public indirectly being able to piece together the identities of protected witnesses in that case.

This is a process known as “jigsaw identification.”

The court, having found Murray guilty of contempt of court via “jigsaw identification”, ultimately sentenced the Scotsman to eight months in prison.

Typically, a person will only serve half of their prison sentence in custody and then be released on license (akin to parole) for the second half of their sentence. In Murray’s case, that would mean four months of imprisonment.

Murray lodged an appeal to the UK Supreme Court against the conviction as well as the prison sentence.

The Dissenter reviewed the appeal submissions, which are not publicly available.

The three judges sitting at the High Court, who considered Murray’s request for permission to appeal, are the same judges who convicted him.

It is not uncommon for applicants to first have to seek permission to appeal from the very court which rendered the decision being appealed.

The High Court concluded that there were “no arguable points in law” arising out of the application and refused to grant the appeal requested. However, with the understanding that Murray intends to now seek permission to appeal directly from the Supreme Court itself, the three judges agreed to suspend the 62-year-old’s imprisonment for another four weeks.

1. The test applied by the court for “jigsaw identification” was too wide and therefore violates Article 10 of the European Convention on Human Rights, which guarantees freedom of expression.

2. A sentence of eight months imprisonment is disproportionate under the circumstances

Any interference in the Article 10 rights of an individual must be “prescribed by law.” Murray’s lawyers submitted that it is “settled law” that any restriction on the right to free expression – in this case a court order prohibiting the publication of information likely to lead to the identification of a protected witness – must be “adequately accessible” and “sufficiently precise.”

The test applied by the High Court in determining the meaning of “jigsaw identification,” is too wide, the appeal submissions asserted, making it “impossible for any publisher to know what section of the public the court will have in mind when assessing whether published information will identify someone.”

In the March 25 decision against Murray, the High Court determined:

The question which must be asked is whether in its context the material was such as was likely, objectively speaking, to lead to identification of the complainers. If the material would be likely to enable a particular section of the public to do so that would be sufficient.

Murray’s lawyers submitted that “section of the public” is imprecise. “With no further definition or qualification, a ‘section’ of the public can be of any size or complexion,” they contended.

Such a test is also “unforeseeable,” the application stated, because a “‘particular section’ of the public could be so small that it is no longer ‘the public’ in any meaningful sense, yet identification to that section of the public—however small and however close to the complainers—would still breach the order.”

In other words, a “section of the public” could very well be a co-worker of a complainer or someone who already has extensive or intimate knowledge of the facts of the case.

“In those circumstances, no media organization could report the barest details of the case without risking identifying a complainer to someone who might know her or the accused”, the application declares.

During Murray’s two-hour trial in January, his lawyers maintained the test should be whether an everyday member of the public was likely to be able to piece together the identity of a protected witness as a result of the publications and not merely a “section” of the public.

But the High Court rejected this argument on the basis that they merely applied an “objective test” as to whether information that Murray published “was likely to disclose the identity of the complainers at trial.”

Murray’s defense argued the sentence of eight months of imprisonment violated Article 10 by virtue of being “disproportionate.”

The European Court of Human Rights, which is based in Strasburg, France, has made clear that “the imposition of a prison sentence for a press offense” will only be compatible with Article 10 in exceptional circumstances, Murray’s team submitted. For example, those “exceptional circumstances” could involve “hate speech or incitement to violence.”

The defense argued “whatever its effect on the fundamental rights of the complainers in the Salmond trial,” Murray’s publications don’t reach “the exceptionally high level contemplated by the Strasbourg Court before a sentence of imprisonment will be justified.” They also do not rise to a level that justifies an eight-month sentence.

Murray’s lawyers added neither they nor the prosecution “can recall any situation in recent history where any editor, broadcaster or journalist has been committed to prison for ‘media contempt,’ even where that contempt has required the discharge or adjournment of the proceedings in question.”

But the High Court rejected this ground of appeal as not being arguable. They held that the rights of others—namely the right of the complainers not to be identified— were “seriously impaired” by Murray’s reporting. For that reason, the judges believe that an eight-month prison sentence was in fact proportionate, especially as they could have given him a two-year sentence.

In their opinion, the High Court, for the most part, did not find that the complainers were actually identified by Murray, but rather that he published information which could be pieced together by a “section of the public” leading to their identification.

But they also considered it important that potential future complainers of alleged sexual offences must be re-assured that their identities will be protected. As such, the High Court believes the sentence is a deterrent for those covering trials in the future.

Although it is not uncommon for the court of first instance to have to consider the initial request to grant permission to appeal, it is noteworthy that one of the three judges – Lady Leeona Dorrian – also oversaw Salmond’s trial. This means that Lady Dorrian was already aware of the identities of the complainers in this case and therefore, perhaps inevitably, far more likely to piece together the identity of a complainer when reading Murray’s articles, which were published during the trial.

Dorrian also led the push for specialized courts, without juries, to consider sex-assault cases like the trial of the Former First Minister.

Salmond was ultimately acquitted on all the charges against him. A verdict which critics of the process believe would have been far less likely if it was merely down to a judge to decide on guilt or innocence.

Questions have been raised as to whether Salmond’s prosecution was politically motivated and a result of a split within the governing Scottish National Party, which Salmond used to lead.

Murray, like Salmond, has been an outspoken critic of the current Scottish First Minister Nicola Sturgeon and has contended that the prosecution of Salmond as well as his own prosecution for contempt of court were politically motivated as a result.

The Dissenter understands, from a source very close to the case, that Murray’s lawyers have avoided raising the claim that the contempt of court charges were politically motivated out of fear that without clear evidence to substantiate the claim their own ability to practice law could be jeopardized.

However, during oral submissions in favor of the appeal on June 7, Roddy Donlop QC, Murray’s main lawyer, not so subtly placed the point before the court.

“Much of that comment and concern has highlighted [that] Mr Murray alone was brought to the attention of the court despite other journalists publishing material that was arguably more likely to identify the complainers. Some of that has led to public comment that proceedings against Mr Murray were politically motivated,”  Donlop told the court.

The former diplomat to Uzbekistan, who blew the whistle on his government’s role in covering up torture, could find himself serving his sentence before the Supreme Court even decides on whether to grant permission for him to appeal in the first place, let alone actually considering the merits of the appeal itself.

Much will turn on whether the judges in London, where the Supreme Court is based, consider the application on an expedited basis.

Mohamed Elmaazi is a journalist who has covered all of Julian Assange’s hearings. His work has appeared in Jacobin, The Canary, The Grayzone, and The Real News.