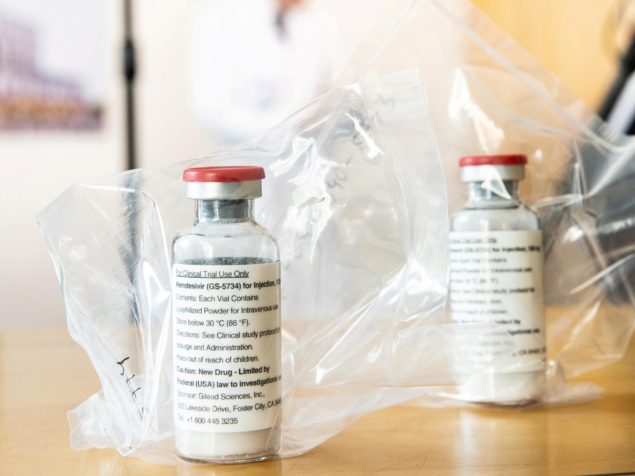 The US has bought up nearly all of the coronavirus drug Remdesivir available on the market, a move that has left scientists frustrated and worried.

The US has bought up nearly all of the coronavirus drug Remdesiviravailable on the market, a move that has left scientists frustrated and worried.

Remdesivir, made by the company Gilead Sciences originally as an Ebola treatment, is the first drug that has been shown to effectively treat Covid-19. The US has bought 500,000 doses of the drug, enough to clear out Gilead of its stock for all of July and most of August and September.

Dr Ohid Yaqub, Senior Lecturer at the Science Policy Research Unit at the University of Sussex, said that in addition to leaving the rest of the world without access to the drug, the US’s hoarding of the critical medicine has also concerned scientists who fear the nation will not collaborate with other nations in response to the pandemic.

“The buying-up of Remdesivir is disappointing news, not necessarily because of the shortages it implies for other countries, but because it so clearly signals an unwillingness to co-operate with other countries, and the chilling effect this has on international agreements about intellectual property rights,” Mr Yaqub said in a statement released through the Science Media Centre.

The recent drug purchase isn’t the first time the US has tried to box-out the rest of the world during the coronavirus pandemic.

In March, the US government offered a German pharmaceutical company, CureVac, a large sum of money to relocate its research division to the US after it began developing a promising coronavirus vaccine candidate. The deal would have required CureVac to produce the vaccine solely for the US.

Earlier this month, the CEO of Sanofi, a French pharmaceutical company working on a vaccine, said the US would get access to any vaccines produced first since it had contributed the most funding towards research, an announcement that was not well received across the rest of Europe.

Gilead earned its own criticism this week when it priced a 5-day treatment with its drug at $3,120 for typical patients with private health insurance. The company will provide the drug at a 25 per cent discount to other developed countries to promote the drug’s global proliferation.

According to the Washington Post, Gilead has licensed a manufacturer to produce a generic version of the drug, which the company can sell at a substantially lower cost.

Vermont Senator Bernie Sanders lashed out at the company and accused it of price gouging.

“As a company, Gilead is now worth over $15 billion more than before the pandemic, in part because it expects to make enormous profits by charging over $3,000 for a drug they had already developed years ago,” Mr Sanders tweeted. “Their greed must be stopped.”

As a company, Gilead is now worth over $15 billion more than before the pandemic, in part because it expects to make enormous profits by charging over $3,000 for a drug they had already developed years ago.

Their greed must be stopped.https://t.co/v6aoZi9tb5

In response to the US decision to buy the world’s stock of the drug, governments could invoke “compulsory licensing” to get around patent laws.

“The shortage issue may be addressed by governments around the world invoking compulsory licensing. This is a mechanism under TRIPS Article 31, where governments can decide that the circumstances are so urgent, say a public health emergency such as this one, that they will not respect a patent holder’s rights to monopoly,” Mr Yaqub said. “So the governments of those countries will allow their manufacturers to go ahead with producing generic versions of the patented drugs. They may even allow them to be exported around the world, in direct competition to the brand name drugs produced by the patent holder.”

In May, the US – along with ambassadors from the UK, Japan, and other developed nations with substantial pharmaceutical industries – distanced themselves from a World Health Organisation resolution that established compulsory licensing rights for countries that could not access needed Covid-19 drugs due to intellectual property issues.

The US issued a statement at the time, claiming the resolution would “send the wrong message to innovators who will be essential to the solutions the whole world needs.”

“Undermining the monopoly rights like this presents a challenge for the multilateral view on the need to offer some degree of intellectual property protection in order to provide R&D incentives,” Mr Yaqub said. “It will be of concern not just to expert policymakers, but also other companies too, who will not want to see TRIPs being undermined.”

Jamie Love, of Knowledge Ecology International, an advocacy group tracking patents and medical issues, told STAT News that the US’s moves to restrict global access to Covid-19 drugs was a step beyond simply prioritising the needs of its population.

“It’s one thing for a country to use its economic clout to buy preferential access to drugs or vaccines. It’s another to prevent others from manufacturing and expanding global supply,” Mr Love said. “Hoarding intellectual property for medicine in a pandemic is the behaviour of a sociopath.”