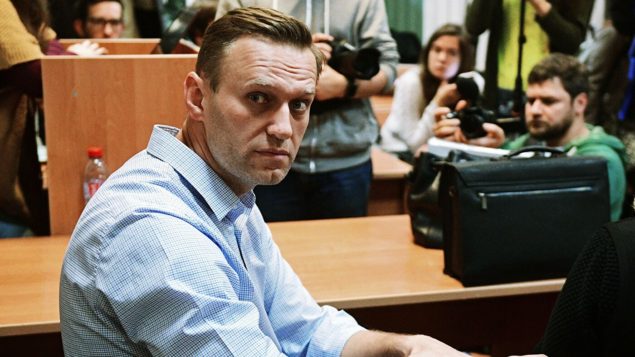 If the crisis in Belarus is not enough, there is another ‘breaking news’ development in Russia.

On August 20, the lead of the Russian ‘non-system’ opposition (the hardcore pro-Western, neo-liberal part of the opposition), Alexei Navalny, was urgently hospitalized in Omsk, Russia. He is unconscious in intensive care and connected to a ventilator.

If the crisis in Belarus is not enough, there is another ‘breaking news’ development in Russia.

On August 20, the lead of the Russian ‘non-system’ opposition (the hardcore pro-Western, neo-liberal part of the opposition), Alexei Navalny, was urgently hospitalized in Omsk, Russia. He is unconscious in intensive care and is connected to a ventilator.

Navalny was on a flight from Tomsk to Moscow, when he suddenly became “ill”. Due to that, the airplane made an emergency landing in Omsk, Kira Yarmysh, press secretary of the founder of the Anti-Corruption Foundation (FBK), said.

In an ambulance, Navalny was taken to the emergency hospital No. 1 in Omsk. The Ministry of Health of the Omsk region confirmed that Navalny is in intensive care.

According to reports, the politician was put into a state of artificial coma in order to be connected to a ventilator.

The politician’s personal doctor Anastasia Vasilieva has left for Omsk. According to Yarmysh his condition is serious.

People on the flight said that Navalny went to the toilet and didn’t come out for a long while, after that they heard him call for assistance.

The video makes it seem like he is obviously under the influence of some sort of drugs or medication. However, Navalny supporters say that he was ‘poisoned’.

HINT: Sodium oxybate is a central nervous system depressant. It is used to treat cataplexy (sudden loss of muscle strength) and reduce daytime sleepiness in patients with narcolepsy. Sodium oxybate is also known as GHB, a known street drug of abuse. Because of the potential for abuse and serious side effects, sodium oxybate is available only from a certified pharmacy under a special program. Your doctor must be registered in the program in order to prescribe sodium oxybate for you. (link)

Reports of overdose in medical literature are generally from abuse, and often involve other drugs as well. Symptoms include vomiting, excessive sweating, periods of stopped breathing, seizures, agitation, loss of psychomotor skills, and coma. Overdose can lead to death due to respiratory depression. People who overdose may die from asphyxiation from their own vomit. People that have overdosed or suspected of overdosing may need to be made to vomit, be intubated, or/and put on a ventilator. (link)

According to Yarmysh, Navalny was poisoned with something mixed in his tea.

“We assume that Alexei was poisoned with something mixed into the tea. It was the only thing that he drank in the morning. Doctors say the toxin was absorbed faster through the hot liquid,” she tweeted.

Navalny’s spokeswoman on who might have poisoned Russian opposition leader: “It is Putin. Whether he gave the order or not, it is on him”. https://t.co/gOqo1QzmJU

The politician did not eat or drink anything on the plane, S7 Airlines reported.

The Ministry of Health said that they are considering different versions of what happened.

Poisoning with sodium oxybutyrate has been unofficially reported.

The regional Ministry of Health says that “specialists of all profiles” were involved in the treatment of Navalny, they are working with different diagnoses, “which are being confirmed or excluded.”

Anatoly Kalinichenko, deputy chief physician of the hospital, said that “there is no certainty that the cause of the condition is poisoning.”

“Naturally, poisoning is seen as one of the possible causes of the worsening of the condition, but in addition there may be a number of conditions that have arisen acutely and led to the same clinic,” said a spokesman for the hospital.

Kalinichenko also said that “doctors are now engaged in saving his life.”

Navalny drank black tea in a coffee shop at Tomsk airport, where they conduct an internal check.

The owner of the coffee shop told Interfax that he would find out all the circumstances and study the recordings from the CCTV cameras. The transport police of Tomsk began an investigation.

Representatives of the Tomsk airport said they were ready to provide observation records. The coffee shop was temporarily closed after the start of the inspection.

Police were called to the Omsk hospital where Navalny is located, Yarmysh said. Representatives of the Investigative Committee also arrived there.

According to NGS-Omsk, the hospital is being patrolled by police, and FSB officers are also on the spot. Yarmysh says that “the intensive care unit is full of policemen.”

One of the policemen said that nothing suspicious was found during the inspection of the politician’s belongings.

FBK lawyer Vyacheslav Gimadi said that he would ask the Investigative Committee to open a criminal case under the article on encroachment on the life of a public figure.

According to TASS, law enforcement agencies are not yet considering the version of Navalny’s deliberate poisoning.

“It is possible that he drank something or took something himself yesterday,” said a source in the law enforcement agencies.

Also, Kremlin press secretary Dmitry Peskov proposed to assist the evacuation of Navalny to a foreign hospital if it’s needed. The Navalny-led opposition already requested help in this. There are little doubts that if the leader of the Russian neo-liberal opposition leaves Russia to some ‘European hospital’, there are high chances that it will be found that he was ‘highly likely poisoned by Putin agents’.

Then, the opposition was also speculating that he was poisoned. Navalny’s personal doctor, Anastasia Vasilyeva, who has monitored the oppositionist’s health since 2017, said that his malaise could have been “the result of the damaging effects of unspecified chemicals.”

It seems that Putin’s agents, whom the opposition blamed for the both cases, work not very well. At the same time, the new ‘poisoning scandal’ (regardless the real cause of the incident, let’s hope Navalny will survive and be well) went pretty on time. The Russian neo-liberal opposition actively participates in the developing crisis in Belarus on the side of forces that seek to overthrow the political regime of President Alexander Lukashenko. Mainstream media, Western states and the pro-Western Belarusian opposition have been increasingly creating a hysteria about the bloody Kremlin that seeks to suppress the ‘democratic effort’ of the ‘Belarusian population’. Therefore, after the inability to triggering a civil conflict in Belarus through street provocations, pro-Western forces may have opted to create a sacred sacrifice to destabilize the situation in Belarus and fuel anti-Russian propaganda even further. This also may be an attempt to destabilize the situation in Russia amid the crisis in Belarus in order to distract Moscow from the Western-led regime change attempts in Minsk to the internal political matter. In any case, Alexei Navalny just became a pawn in a political game of more influential forces. This is the logical fate of any political figure that links his career and life with Western sponsors.