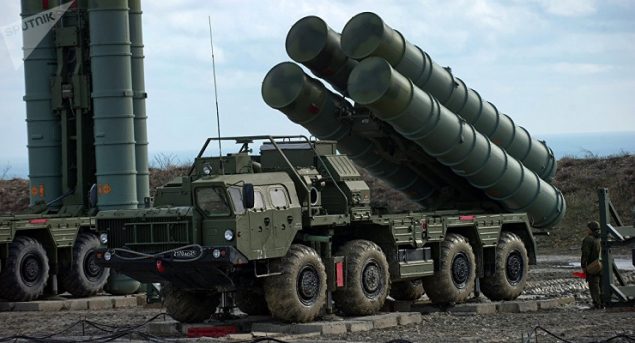 Turkish president, Recep Tayyip Erdoğan has chosen not to be intimidated by the pressure and threats from Washington,  nor to be lured by the variety of its temptations, and has instead turned his back on the leader of NATO.

Middle Eastern media outlets have been actively reporting on the delivery of Russia’s S-400 Triumph missile systems purchased by Turkey.

The authors of these articles have tried to assess the significance of this deal for Turkey, the reaction of Ankara’s NATO allies and the possible consequences in terms of the regional and global balance of power. The headlines of a number of these stories are quite telling: “Could Turkey swing over to the Russian camp?”, “Will Turkey leave NATO?”.

By purchasing Russian artillery, the Turkish leadership has severed whatever remained of the strategic ties that have linked it to the United States for the last 70 years. Recep Tayyip Erdoğan chose not to be intimidated by the pressure and threats from Washington or to be lured by the variety of its temptations, and instead turned his back on the leader of NATO. Turkey’s attempt to leave the U.S. sphere of influence is a very risky venture for this nation, as the key means of U.S. retaliation is vengeful economic sanctions.

Other experts think that the issue of sanctions the United States has threatened Turkey with is an intricate one. It is believed that, on the one hand, Americans would not want to sacrifice their relationship with a partner like Turkey, because the latter has the second largest army (in terms of size) in NATO and an important geographic location. On the other hand, one should not underestimate the influence of hawkish politicians on the U.S. administration. These officials are eager to punish Ankara for daring to take its relationship with the Russian Federation from the trade and economic level to the military one.

At the same time, there are concerns in the USA that sanctions in the defense sphere could eventually have a negative impact on the United States itself and also on NATO. The author believes that U.S. measures to ban deliveries of F-35 aircraft to Turkey or to prohibit its participation in their manufacturing will not result in Ankara’s capitulation and instead bring it even closer to Russia. After all, Moscow is really offering Turkey a viable choice: to purchase military equipment with a very competitive price to quality ratio.

According to Lebanon’s Consultation and Research Institute, there is probably a tendency in the USA to complicate the relationship with Ankara in order to cause an economic upheaval of sorts in Turkey. This could lead to a retaliation by Ankara, especially in light of the current confrontation between the White House and Iran. In the present climate, when the balance of power in the Middle East is shifting in a chaotic manner, it is advisable to carefully monitor the relations between Turkey and Iran.

Even if, from a historical perspective, the Ottoman Empire and the Shah-led Iran were at odds with each other in the past, their common interests at present are pushing the two sides towards the path of cooperation with one another.    At the same time, as a counterbalance to Iran’s “Islamic Revolution”, Turkey is offering its moderate form of Islam as a viable alternative that can successfully resolve the issues facing the Arab Muslim world.

Iran played right into Turkey’s hands when it suppressed Kurd’s nationalist sentiments in Iraq and Syria, and when it offered political and economic support to Doha during the conflict between Qatar and the nations of the Persian Gulf. From this perspective, Iran has a similar stance to that of Turkey. In addition, Iran played an influential role in tying Russia’s strategy in the Middle East to Ankara’s goals. And all of these developments occurred despite the differences between these two nations in other areas as well as in ideology and politics.

It is in Ankara’s interests that there is no regime change in the Islamic Republic of Iran (IRI), and Turkey views the increasing pressure applied on Tehran as a tool to change its political system. If this were to happen, Turkey fears the new Iranian regime would follow the West’s lead and could, therefore, be used against Ankara.

A number of experts from Middle Eastern media outlets believe that the US-Turkey crisis, which had flared up because of the purchase of S-400 missile systems by Ankara, was no more than the tip of an iceberg, considering the number of other disagreements on many levels between these two sides. As, for instance, Turkey’s desire to play a more influential role in regional as well as international affairs as it leaves the sphere of influence of the West and the USA.

The purchase of S-400 Triumph missile systems by Ankara ought to be viewed in light of its course forward, which has little to do with NATO’s policies or obligations that Turkey has as a member of this bloc. The military alliance has put Russia on its list of unfriendly nations.

In addition, the Countering America’s Adversaries Through Sanctions Act (CAATSA) was signed into law in the United States. In accordance with this regulation, countries that buy weapons from U.S. enemies are subject to sanctions.

Turkey has countered views expressed in the West that the relationship between Ankara and Moscow was being built at the expense of the historical and deeply rooted ties between Turkey, and the West and NATO. In response, Turkey has pointed out that the crises engulfing the regions nearby require that it have the necessary military capabilities in order to defend itself. According to military experts in Turkey, the purchase of Russian missile systems is to facilitate the process of ensuring the nation’s air space is secure, as using scheduled F-35 flights to do so is more expensive when the cost of their deployment is taken into account.

According to TV channel Al Mayadeen, all the signs point to the fact that new regional alliances and coalitions to promote the interests of very powerful nations are being currently established, and that all the options are being weighed very carefully so as to avoid a global confrontation. In addition, countries engaged in this process need to ensure they protect their national security interests and the future of their people.

Former coalitions are not viewed as ‘sacred cows’, which means new organizations formed may seem surprising in light of traditional considerations.