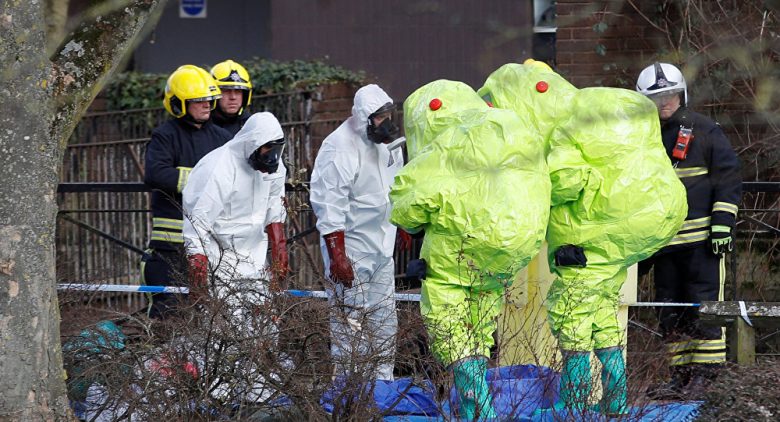 Craig Murray, Mar 13, 2018. The Skripal narrative, increasingly, hinges on two questions: Who has the capacity to manufacture the agents that were allegedly used? and who benefitted from their use? Murray investigates where the investigators – so far – won’t go.

The same people who assured you that Saddam Hussein had WMD’s now assure you Russian “novochok” nerve agents are being wielded by Vladimir Putin to attack people on British soil. As with the Iraqi WMD dossier, it is essential to comb the evidence very finely. A vital missing word from Theresa May’s statement yesterday was “only”. She did not state that the nerve agent used was manufactured ONLY by Russia. She rather stated this group of nerve agents had been “developed by” Russia. Antibiotics were first developed by a Scotsman, but that is not evidence that all antibiotics are today administered by Scots.

The “novochok” group of nerve agents – a very loose term simply for a collection of new nerve agents the Soviet Union were developing fifty years ago – will almost certainly have been analysed and reproduced by Porton Down. That is entirely what Porton Down is there for. It used to make chemical and biological weapons as weapons, and today it still does make them in small quantities in order to research defences and antidotes. After the fall of the Soviet Union Russian chemists made a lot of information available on these nerve agents. And one country which has always manufactured very similar persistent nerve agents is Israel. This Foreign Policy magazine (a very establishment US publication) article on Israel‘s chemical and biological weapon capability is very interesting indeed. I will return to Israel later in this article.

Incidentally, novachok is not a specific substance but a class of new nerve agents. Sources agree they were designed to be persistent, and of an order of magnitude stronger than sarin or VX. That is rather hard to square with the fact that thankfully nobody has died and those possibly in contact just have to wash their clothes.

From Putin’s point of view, to assassinate Skripal now seems to have very little motivation. If the Russians have waited eight years to do this, they could have waited until after their World Cup. The Russians have never killed a swapped spy before. Just as diplomats, British and otherwise, are the most ardent upholders of the principle of diplomatic immunity, so security service personnel everywhere are the least likely to wish to destroy a system which can be a key aspect of their own personal security; quite literally spy swaps are their “Get Out of Jail Free” card. You don’t undermine that system – probably terminally – without very good reason.

It is worth noting that the “wicked” Russians gave Skripal a far lighter jail sentence than an American equivalent would have received. If a member of US Military Intelligence had sold, for cash to the Russians, the names of hundreds of US agents and officers operating abroad, the Americans would at the very least jail the person for life, and I strongly suspect would execute them. Skripal just received a jail sentence of 18 years, which is hard to square with the narrative of implacable vindictiveness against him. If the Russians had wanted to make an example, that was the time.

It is much more probable that the reason for this assassination attempt refers to something recent or current, than to spying twenty years ago. Were I the British police, I would inquire very closely into Orbis Intelligence.

There is no doubt that Skripal was feeding secrets to MI6 at the time that Christopher Steele was an MI6 officer in Moscow, and at the the time that Pablo Miller, another member of Orbis Intelligence, was also an MI6 officer in Russia and directly recruiting agents. It is widely reported on the web and in US media that it was Miller who first recruited Skripal. My own ex-MI6 sources tell me that is not quite true as Skripal was “walk-in”, but that Miller certainly was involved in running Skripal for a while. Sadly Pablo Miller’s LinkedIn profile has recently been deleted, but it is again widely alleged on the web that it showed him as a consultant for Orbis Intelligence and a consultant to the FCO and – wait for it – with an address in Salisbury. If anyone can recover that Linkedin entry do get in touch, though British Government agencies will have been active in the internet scrubbing.

It was of course Christopher Steele and Orbis Intelligence who produced for the Clinton camp the sensationalist dossier on Trump links with Russia – including the story of Trump paying to be urinated on by Russian prostitutes – that is a key part of the “Russiagate” affair gripping the US political classes. The extraordinary thing about this is that the Orbis dossier is obvious nonsense which anybody with a professional background can completely demolish, as I did here. Steele’s motive was, like Skripal’s in selling his secrets, cash pure and simple. Steele is a charlatan who knocked up a series of allegations that are either wildly improbable, or would need a high level source access he could not possibly get in today’s Russia, or both. He told the Democrats what they wish to hear and his audience – who had and still have no motivation to look at it critically – paid him highly for it.

I do not know for certain that Pablo Miller helped knock together the Steele dossier on Trump, but it seems very probable given he also served for MI6 in Russia and was working for Orbis. And it seems to me even more probable that Sergei Skripal contributed to the Orbis Intelligence dossier on Trump. Steele and Miller cannot go into Russia and run sources any more, and never would have had access as good as their dossier claims, even in their MI6 days. The dossier was knocked up for huge wodges of cash from whatever they could cobble together. Who better to lend a little corroborative verisimilitude in these circumstances than their old source Skripal?

Skripal was at hand in the UK, and allegedly even close to Miller in Salisbury. He could add in the proper acronym for a Russian committee here or the name of a Russian official there, to make it seem like Steele was providing hard intelligence. Indeed, Skripal’s outdated knowledge might explain some of the dossier’s more glaring errors.

But the problem with double agents like Skripal, who give intelligence for money, is that they can easily become triple agents and you never know when a better offer is going to come along. When Steele produced his dodgy dossier, he had no idea it would ever become so prominent and subject to so much scrutiny. Steele is fortunate in that the US Establishment is strongly motivated not to scrutinise his work closely as their one aim is to “get” Trump. But with the stakes very high, having a very loose cannon as one of the dossier’s authors might be most inconvenient both for Orbis and for the Clinton camp.

If I was the police, I would look closely at Orbis Intelligence.

To return to Israel. Israel has the nerve agents. Israel has Mossad which is extremely skilled at foreign assassinations. Theresa May claimed Russian propensity to assassinate abroad as a specific reason to believe Russia did it. Well Mossad has an even greater propensity to assassinate abroad. And while I am struggling to see a Russian motive for damaging its own international reputation so grieviously, Israel has a clear motivation for damaging the Russian reputation so grieviously. Russian action in Syria has undermined the Israeli position in Syria and Lebanon in a fundamental way, and Israel has every motive for damaging Russia’s international position by an attack aiming to leave the blame on Russia.

Both the Orbis and Israeli theories are speculations. But they are no more a speculation, and no more a conspiracy theory, than the idea that Vladimir Putin secretly sent agents to Salisbury to attack Skripal with a secret nerve agent. I can see absolutely no reason to believe that is a more valid speculation than the others at this point.

I am alarmed by the security, spying and armaments industries’ frenetic efforts to stoke Russophobia and heat up the new cold war. I am especially alarmed at the stream of cold war warrior “experts” dominating the news cycles. I write as someone who believes that agents of the Russian state did assassinate Litvinenko, and that the Russian security services carried out at least some of the apartment bombings that provided the pretext for the brutal assault on Chechnya. I believe the Russian occupation of Crimea and parts of Georgia is illegal. On the other hand, in Syria Russia has saved the Middle East from domination by a new wave of US and Saudi sponsored extreme jihadists.

The naive view of the world as “goodies” and “baddies”, with our own ruling class as the good guys, is for the birds. I witnessed personally in Uzbekistan the willingness of the UK and US security services to accept and validate intelligence they knew to be false in order to pursue their policy objectives. We should be extremely sceptical of their current anti-Russian narrative. There are many possible suspects in this attack.