More than three million Russians fell below the official poverty line in the first three months of this year as Russia’s economy stumbled into a recession, state statistics service Rosstat said Thursday.

The number of people living below the poverty line rose from 19.8 million in the first quarter of 2014 to 22.9 million in the same period of this year — a rise of 3.1 million, according to data from Rosstat.

The percentage of Russians living below the poverty line thereby rose to 15.9 percent of the total population in the first quarter, which is 2.1 percentage points more than in the same period last year, according to the statistics.

Earlier this month the Russian government set the minimum subsistence level for the first quarter, an indicator of poverty in Russia, at 9,662 rubles ($174) per month. This was an increase of 17.3 percent from the previous quarter, Rosstat said.

The cost of living in Russia has soared this year due to sharp inflation spurred by steep falls in the value of the ruble currency, which pushed up the cost of imported products and components.

Inflation spiked to 16.2 percent in the first quarter even as Russians’ nominal incomes rose by only 11 percent, according to Rosstat.

Russia’s economy is expected to contract by about 3 percent this year due to a plunge in the price of oil, Russia’s main export, and Western sanctions imposed on Moscow over the Ukraine crisis.

The government estimated previously that the recession could push nearly 2 million people into poverty this year.

By Anastasia Bazenkova and Peter Hobson, The Moscow Times, June 11, 2015

Introduction by New Cold War.org editors–The following article is published for the information of readers. It explains some of the economic consequences in Russia of the fall of world oil prices and the economic embargo against the country by the big imperialist countries of the world.

The authors go on to argue that all this is “a setback for President Putin”. The editors of the Moscow Times give this slant to the story in their headline selection. “Putin era prosperity” is “fading” we read. How does three months of economic data prove such a thesis? Meanwhile, polls of the Russian people consistently show very high approval ratings for their president, while their esteem for Western countries has plummeted. So whose popularity is being set back by NATO countries’ new cold war, including their

economic embargo? Maybe the drop in popularity of the West has something to do with this sentence in the following article: “Those most at risk [of rising poverty] are families with children.”

More Russians have fallen into official penury as the country’s economic troubles cause the largest increase in poverty of President Vladimir Putin’s 15-year rule.

The government last week published an order raising its recognized bare minimum required to live in the first quarter of this year to 9,662 rubles ($180) per month, a 17 percent rise from the previous quarter and 25 percent more than in the first three months of 2014. The government adjusts the poverty line every quarter.

The increase is higher than inflation, which has surged over the past year as Russia’s economy has faltered. But it far outstrips nominal growth in incomes, meaning more people will now find themselves below the poverty threshold.

Russia’s economy began contracting this year after being struck by Western sanctions imposed on Moscow over the Ukraine crisis and falls in the price of oil, Russia’s main export.

The slump threatens to push nearly 2 million more people into official poverty this year, according to government estimates.

Such a rise would be a setback for President Putin, whose 15 years in power were accompanied by an oil boom that pulled tens of millions of people out of poverty.

In 2000, the year that Putin ascended to the presidency, 42.3 million Russians, or 29 percent of the population, were below the poverty line, according to Rosstat. With only the occasional wobble, the rate fell steadily through most of Putin’s reign, hitting a low of 15.4 million people in 2012 before rising slightly the following year.

But last year, as Russian economic growth stalled, the number of Russians below the poverty line increased by 600,000 people to reach 16.1 million. The increase was the largest annual rise since 2000, and left 11.2 percent of the population in official poverty, according to Rosstat.

This year, with the economy expected to shrink by around 3 percent, will be worse.

The Economic Development Ministry said earlier this year that the share of people whose incomes are below the living minimum would increase to 12.4 percent by the end of 2015, according to news agency RIA Novosti.

Based on Rosstat’s end-2014 population figure of 143.75 million, that rise would put 1.7 million more people into poverty, raising the number in penury to just over 17.8 million.

The World Bank in an April report was bleaker, predicting that 14.2 percent of Russians would be in poverty by the year’s end, implying an increase of more than 5 million people to 20.4 million.

Those most at risk are families with children, experts told The Moscow Times.

Along with its overall poverty threshold, the government sets different minimum subsistence figures for different regions and social groups. In the first quarter the nationwide averages were 10,404 rubles ($193) for the working-age population, 9,489 rubles ($176) for children and 7,916 rubles ($146) for pensioners, according to the government.

This means pensioners were expected to get by on less than $5 per day on average, and working people on under $6.50 per day — which may be possible in rural regions where many supplement their incomes by growing their own vegetables, but would barely buy a cup of coffee in the capital, Moscow.

But while pensioners have the smallest number, they have the biggest guarantees.

“[State] pensions cannot be lower than the minimum subsistence level, but wages can,” said Sergei Smirnov, director of social policy and socio-economic programs at Moscow’s Higher School of Economics.

The official minimum salary that employers can legally pay workers is 5,965 rubles ($110) per month, just over half the official subsistence level for working-age Russians.

The poverty line is a relative number, and the official statistics do not reflect the real level of poverty in Russia, analysts said.

“By global standards, the poor are considered those who earn 50 to 60 percent of the average wage in the country,” said Alexei Zubets, the head of the sociology department at Moscow’s Financial University.

In April, the average wage was 32,805 rubles ($607) per month, according to Rosstat. That means that those whose income is less than 15,000 rubles a month should be considered poor, not just those who fall below the 9,662 ruble official poverty line.

These people are not starving, but they cannot afford anything but food and necessities, according to Zubets. “And they account for 50 to 55 percent of the population,” he said. 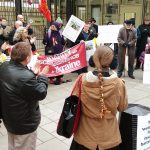