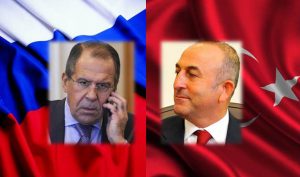 The two foreign ministers discussed current bilateral issues, including the implementation of agreements reached between the Russian and Turkish presidents in St Petersburg on August 9 as part of a common understanding on gradual restoration of bilateral cooperation.

Mr Lavrov and Mr Cavusoglu also exchanged views on the situation in Syria. Mr Lavrov expressed concern over the actions of Turkey’s armed forces and opposition groups under Ankara’s control in the north of Syria and their possible consequences for the efforts to settle the conflict in Syria. The ministers agreed to continue expert consultations in the interests of cooperation on implementing the UN Security Council resolutions on Syria.

Related reading:
Why Russia is in no rush to revive business with Turkey, by Kira Egorova, Russia Beyond The Headlines, Aug 31, 2016