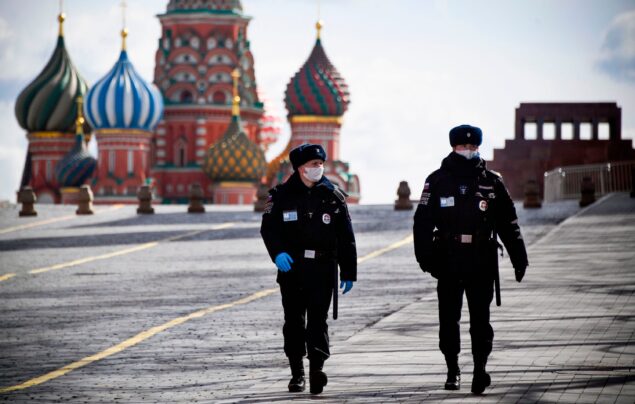 Police officers patrol deserted Red Square in Moscow on April 6, 2020, amid the spread of the COVID-19. (AFP Photo)

Paul Robinson is a professor in the Graduate School of Public and International Affairs at the University of Ottawa. He is the author of numerous works on Russian and Soviet history, military history, ethics, and defence policy. In addition to his academic work, he has written extensively for the national and international press, including The Spectator magazine, The American Conservative, The Ottawa Citizen, and RT. He blogs atwww.irrussianality.wordpress.com

Paul Robinson’s book “Russian Conservatism” is the first book in the Western press to trace the history of Russian conservative thought from its beginning in the nineteenth century to the present. It provides a solid synthesis of cultural, political, and socio-economical ideas and issues that Russian conservative thinkers proposed and debated and shows how Russian conservatism has contributed and is still contributing to the ideology of Russian statehood, to the conceptualization of Russian national identity, and to Russia’s social-economic development. These ideas are still influential in Russia today, that is why the book is an important read for all those who want to understand Russia’s past, present and the direction it will take in the future.