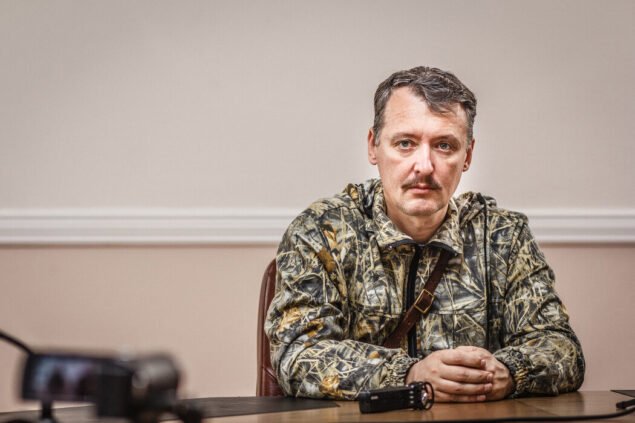 This military analysis was made by Igor Strelkov, former DPR Defense Minister, former Commander of the armed forces of the DPR, head of the People’s militia in Donbass in 2014.

This military analysis was made by Igor Strelkov, former DPR Defense Minister, former Commander of the armed forces of the DPR, head of the People’s militia in Donbass in 2014.

General situation: the offensive came  unexpectedly for Ukraine due to multiple missile strikes, the superiority of the Russian air force in the skies, and the Navy at Sea.

There are four main theaters of military action:

The RF Armed Forces, after artillery and missile preparations (in all theaters), launched an offensive from the Crimean isthmus towards the north, supported by marines near Genichesk and tactical helicopter landings at Kherson and Novaya Kakhovka. The AFU (Ukrainian Armed Forces) front collapsed immediately, and is now essentially inexistant in this direction. From Kherson to Novaya Kakhovka inclusively, the lower Dnieper River and crossings are under the control of the RF Armed Forces, and bridgeheads have been created on the right bank of the Dnieper for further advancement. Attempts by the AFU to pull troops together and create a front were suppressed by air strikes. By nightfall, Russian troops had reached the outskirts of Melitopol from the south.

Russian BUKs in the Kherson region:

The damaged aircraft of the 299th aviation brigade of the Ukrainian Air Force based in Kulbakino, in the Nikolaev region: 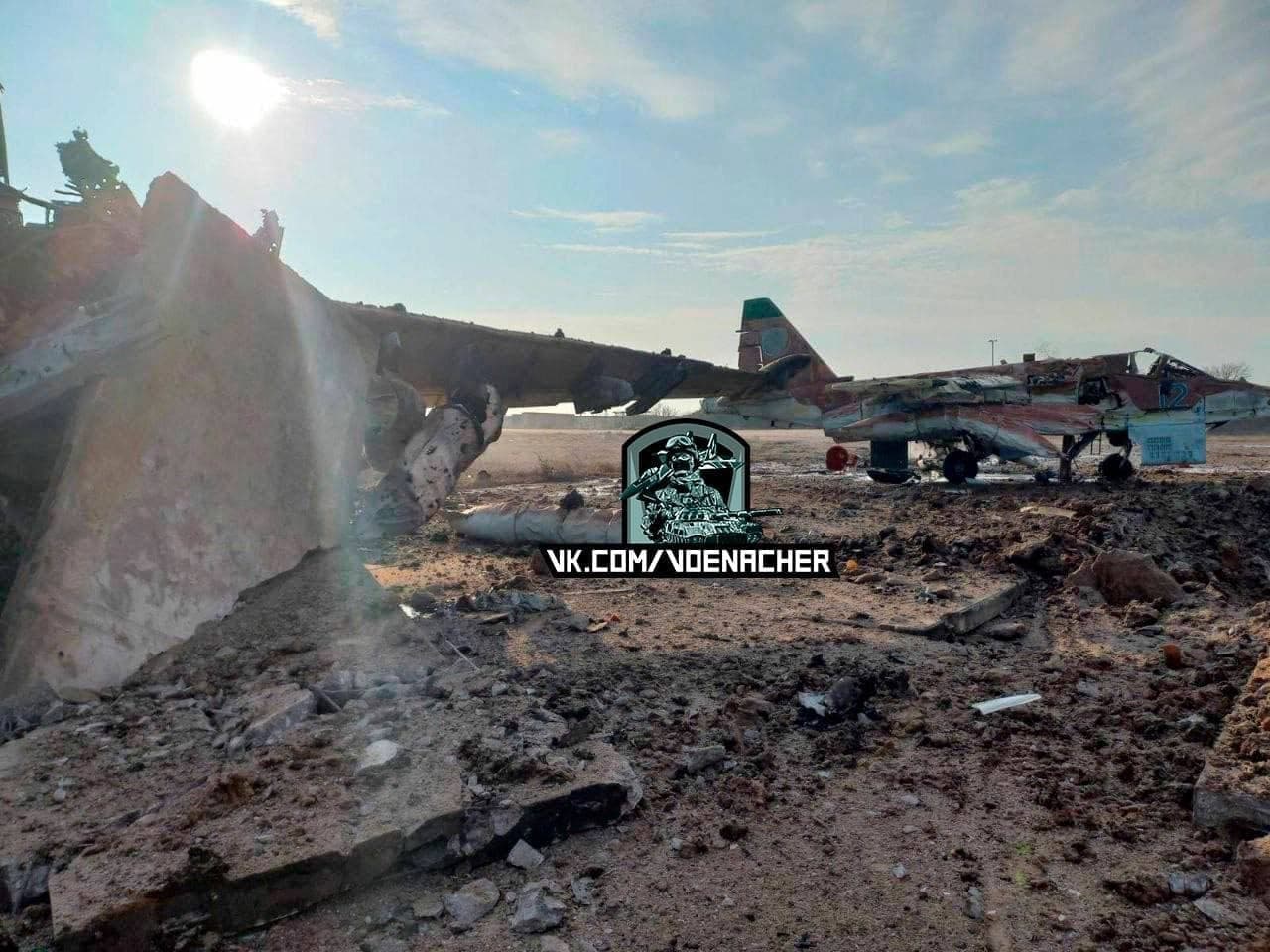 The broadest. It appears the main strike groups overnight and tomorrow will continue the offensive along both banks of the Dnepr to the north – to Zaporozhye and Dnepropetrovsk (aka “Dnepr”, and in Russian correct – Ekaterinoslav), as well as in the western direction – to Nikolaev and in the north/east/rear of the AFU grouping defending in Donbass.

The Ukrainian BM-21 Grad deployed in residential areas of Mariupol:

Shooting is heard in Odessa:

Russian military equipment in Crimea was targeted by shells from the Ukrainian territory. 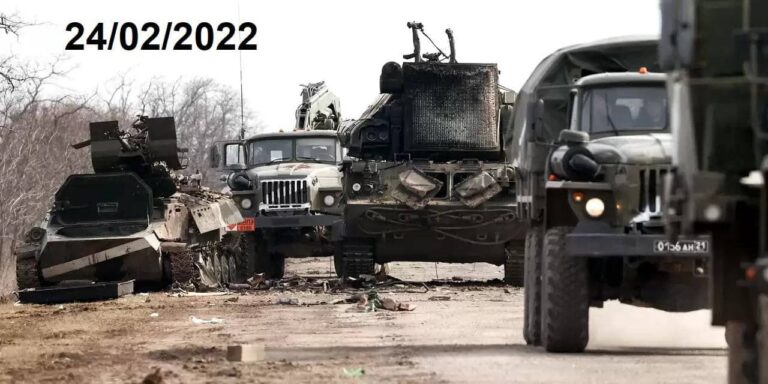 Combat operations are of an emphatically “constraining” nature. The limited attack on Volnovakha is intended to threaten not only Mariupol (in fact, its liberation is of no strategic importance now, as it will certainly be surrendered by the enemy when the troops from the 1st Theater move on to Berdyansk and Zaporizhia), but more importantly, to threaten a frontal break towards the rapidly advancing “Crimean” formations from the west. This threat requires the enemy to buy in and prevents the release of troops that would otherwise have been thrown into recreating the “Crimean Front”.

The Ukrainian Armed Forces again fired at a children’s hospital in Donetsk:

Similarly, attacks from LNR territory towards the north (across the Seversky Donets) do not have any strategic prospects: the objective is to tie up the AFU’s units there and prevent them from being sent to deblock and defend Kharkiv, along with delaying them until the “big pot” from the west is slammed somewhere near Dnepropetrovsk.

The northern outskirts of Donetsk:

Probably the bloodiest fighting and casualties rate is currently coming from the Donetsk theater, as the enemy is defending the deeply echelonized fortified zone, along with its most combat-ready and experienced units.

Tomorrow, the fighting will continue with the following main objective: to prevent the enemy’s withdrawal and relocate his units westward.

The AFU reportedly blew up a bridge to prevent the advance of Russian forces across the Oskol River in the village of Senkovo, Kharkiv region:

3. Frontline from the northern part of the LPR to the Chernihiv region

The greatest success was achieved in the least promising region – the northern sector, where the enemy either did not expect to face long-term resistance, or had insufficient forces to confront it. Sumy, Konotop, almost the entire Sumy region were taken under control; there is an advance in the Chernigov region. The enemy is likely to fight only stalling battles here, attempting to delay the advance towards Kiev, where the main reserves are concentrated. However, the deeper the Russian troops advance, the greater the “operational shadow” of the stubbornly resisting Kharkiv grouping, which was expecting a strike and is manned with well-trained troops. In turn, the RF Armed Forces can not ignore and leave behind the unsecured Kharkov and Chuguev, both for logistical reasons and because the “unbothered” Ukrainian forces may try to counterattack the flank and rear of the advancing units to Kiev, and even hit the RF territory, which does not bear any military danger, although unacceptable for political reasons.

Military equipment of the AFU in the Sumy region:

Satellite images of the damage caused by the strikes of Russian forces on the airfield in Chuguev, in the Kharkov region: 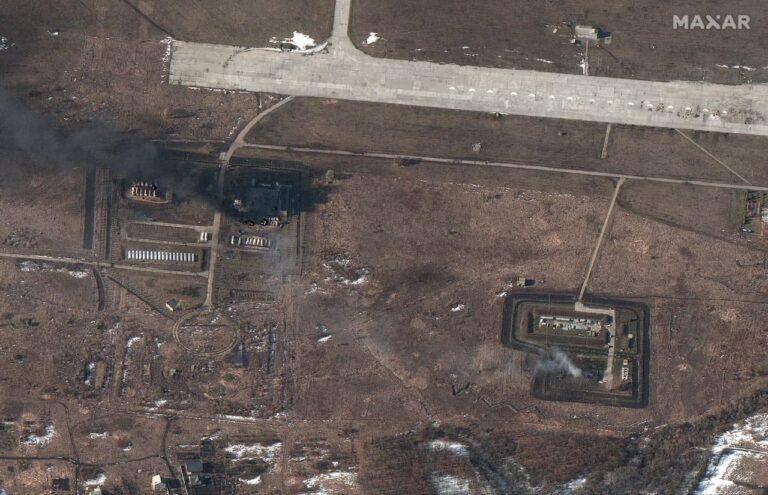 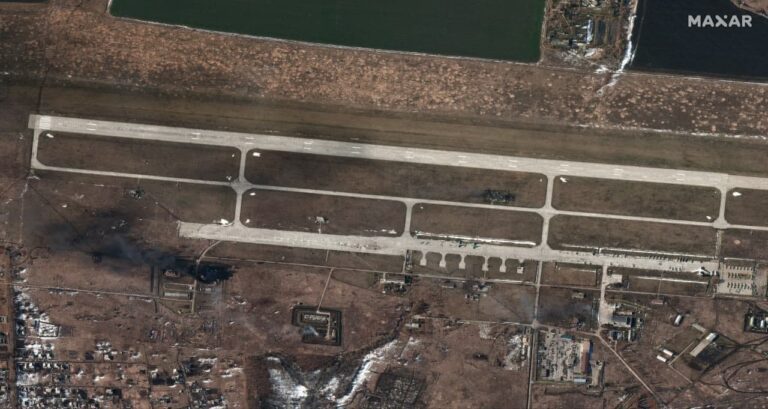 Therefore, tomorrow, fierce battles will continue in the vicinity of Kharkov, with the goal of decisive successes along with taking the city as early as possible.

Clashes broke out in Sumy: 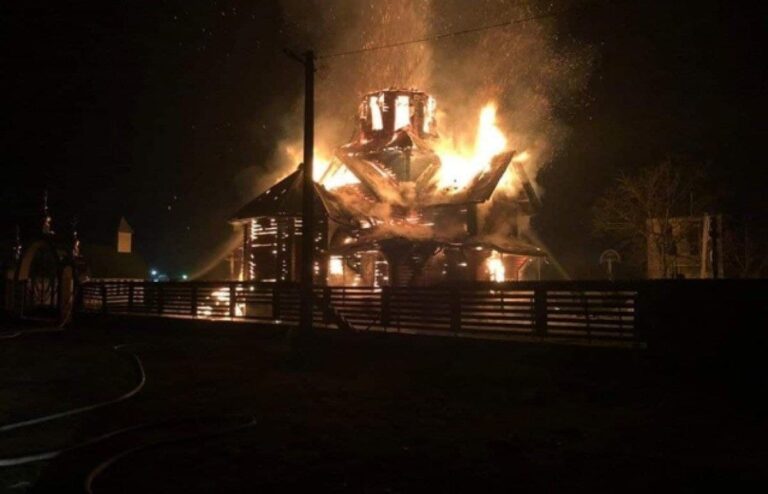 The video reportedly shows clashes near Kharkov in the early morning of February 24:

The operation to seize the air base on the Right Bank, carried out by a large tactical landing force, also came as a surprise to the Ukrainian command, who were shocked by such impudence. Now, however, the RF Armed Forces face the urgent task of connecting the landed units with the main forces breaking through Pripyat (Chernobyl zone). If there is no quick junction (the terrain being favorable for defense), the AFU may try to eliminate the captured bridgehead using their superiority in heavy weapons and their number of troops assigned to defend Kiev from the east. On the other hand, the domination of the Russian Air Force in the skies allows us to hope that the enemy will not be able to quickly concentrate its forces and utilize them. Tomorrow there will be fierce fighting for this initiative. If the Russian troops solve the problem of combining the landing troops with the land-strike group, the fate of Kiev will be decided very quickly, considering its garrison will not be able to defend itself in several directions at once.

The footage was reportedly made near Gostomel airfield, the Kiev region, where Ukrainian security forces are trying to repel Russian special forces:

The Russian AN-26 fell on the territory of the Voronezh region in Russia. The crew did not survive.

In general: the simultaneous strong offensives from different directions deprived the AFU’s command of the opportunity to create an advantage in at least one of the main areas. This was probably due to incorrect expectations of the landing operation in Odessa (the forces assembled there proved to be uselessly idle far from the battlefields). In all likelihood, the necessity to cover the other sections of the border with Belarus also had an impact.

It is too early to speak about “victory in one day”, of course, but a good reserve for a quick strategic success is in place. Much now depends on the availability of reserves and a large number of auxiliary units at the disposal of the Russian command to consolidate the territory covered by the strike groups, so that the groups can continue their deep offensive. 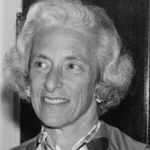 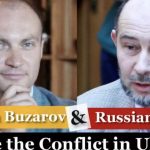