By Yekaterina Sinelschikova, Russia Beyond The Headlines, July 30, 2015

(Further below are two additional articles on the July 29, 2015 Security Council debate on a Malaysia-sponsored resolution proposing the establishment of a tribunal to investigate the crash of Flight MH17.)

Russia has vetoed a UN Security Council draft resolution on the establishment of an international criminal tribunal in connection with the downing of Malaysia Airlines Flight MH17 in July 2014. While countries in favor of the resolution accuse Russia of insulting the families of the 298 victims of the disaster, Russia says the tribunal would have been premature. It also questioned the impartiality of such an investigation. Experts, meanwhile, say the “no” vote may have tough consequences for Russia. 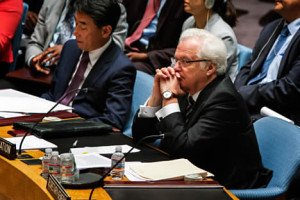 As anticipated, Russia has used its veto to block a UN Security Council draft resolution to establish an international criminal tribunal into the shooting down of Malaysian Airlines Flight MH17 near Donetsk in eastern Ukraine in July 2014.

Russia was the sole country on the 15-member council to veto the resolution in New York on July 29, which was upheld by 11 participants, while three – China, Venezuela and Angola – abstained.

The Russian veto met with a strong reaction from countries that supported the resolution, many of whom described the Russian move as an insult to the families of the victims of the disaster, most of whom were Dutch, Malaysian and Australian nationals.

Australian Foreign Minister Julie Bishop accused Russia of “an affront to the memory of the 298 victims of MH17 and their families and friends,” while U.S. Ambassador to the UN Samantha Power said that Russia had “callously disregarded the public outcry in the grieving nations.”

The French representative called the blocking of the tribunal a “serious defeat” for the UN Security Council, while Ukraine and Malaysia said they would think about other options of prosecuting those responsible for this crime – in particular, about the establishment of a tribunal outside the UN.

Ukrainian Foreign Minister Pavlo Klimkin pointed out that Russia’s vetoing of the resolution would only serve to heighten suspicions among the global community that Moscow had something to hide. “There is no reason to oppose [the tribunal] unless you are a perpetrator yourself,” he said.

The draft resolution, which was submitted to the UN Security Council by Malaysia, and also signed on behalf of Australia, Belgium, the Netherlands and Ukraine, sought to “bring to justice those responsible for crimes related to the destruction of” the aircraft.

A Dutch-led investigation into the shooting down of MH17 is still underway, with findings expected to be published in October, though a preliminary report has already been released. The plane is widely believed to have been shot down by pro-Russian militants using a BUK missile launcher supplied by Russia, though Russian media and officials have put forward various other versions in the last year – most of which have attempted to implicate Ukraine – and the Russian government denies that it has sent either troops or military hardware to eastern Ukraine.

As before, Russia sought to justify its decision to block the resolution by arguing that the UN Security Council had exceeded its powers, claiming that the idea of the tribunal was premature, ill-defined and unfounded.

Russia’s permanent representative to the UN, Vitaly Churkin, had earlier repeatedly warned that Russia would say “no” to the resolution. “In principle, the organization of criminal justice is not a matter for the Security Council,” Churkin said in his speech.

He recalled that the Security Council had formerly made exceptions and initiated the establishment of tribunals in the cases of the former Yugoslavia and Rwanda, but “this experience can hardly be considered successful in view of their complexity, susceptibility to political pressure, high cost and excessive length of proceedings.”

Furthermore, Churkin claimed, the MH17 disaster in principle cannot be qualified as “a threat to international peace and security,” and there was no reason to be confident that the tribunal’s decision would be impartial.

He ended his speech by stressing that Russia is still in favor of a full, independent and objective investigation. “The position that we took today has nothing to do with the promotion of impunity,” he concluded.

Russia chose to submit its own parallel, “compromise” draft resolution on MH17 to the Security Council on July 20, but it did not find support.

The representative of China to the UN, Liu Jieyi, also attributed his decision to abstain from voting by the “prematureness” of the tribunal and the fact that it could only lead to a split among members of the Security Council.

Veto will bring consequences for Russia

Experts approached by RBTH for comment said that the results of the vote were predictable. Mikhail Korostik, an independent political analyst, said that Russia fears that in a criminal investigation, the line of enquiries would be extended from pro-Russian militias, “who would undoubtedly be blamed by the tribunal,” to Russian military officials.

He also cast doubt on the objectivity of such a tribunal, referring to the previous tribunals on Rwanda and the former Yugoslavia. While he agreed that they added either speed or quality to the investigation, he said they yielded “very thorough media coverage of precisely those aspects of the trial that were beneficial to the states that established those tribunals.”

However, the veto imposed by Russia will have its consequences, at least in terms of media impact, said Andrei Kortunov, general director of the Russian Council on Foreign Affairs.In particular, this may be linked to the need to strengthen the sanctions regime, or “at least against this background, it will be very difficult to talk about their removal,” he said.

It cannot be excluded that the Russian veto will also strengthen the positions of those in America and Europe who stand for the supply of lethal weapons to Ukraine, he added.

Incidentally, seven more countries supported the extension of EU sanctions against Crimea and Sevastopol on July 30 – Montenegro, Iceland, Albania, Norway, Ukraine, Liechtenstein and Georgia. Six of them (all but Georgia) have also joined in the decision to extend EU economic sanctions against the Russian Federation.

Published on Interfax.ru, July 30, 2015, translated and published on Russia Beyond The Headlines

Moscow is categorically against the politicization of an investigation into the Malaysia Airlines Flight 17 crash in southeastern Ukraine, Russian presidential press secretary Dmitry Peskov told journalists on July 30 when asked why Russia has vetoed a UN Security Council draft resolution on establishing an international tribunal to prosecute those responsible for the disaster.

“Russia, as has been said on numerous occasions, including by President Vladimir Putin and other of our high-ranking officials, has consistently favored a genuine investigation into this plane crash and the identification of those responsible for it,” Peskov said.

“The investigation should be brought to an end impartially and without bias, so that the full amount of information is considered in the course of the investigation,” he said.

“This statement is totally absurd,” Peskov said. “When Russia repeatedly asked the question about the whereabouts of the materials linked with the Ukrainian side’s air traffic controllers’ communications, etc, at that time, regrettably, no statements were made by Ukraine,” Peskov said.

“That is why such claims are absurd in this case,” he said.

2. MH17: Who is hampering the investigation?

Dr Alexander Yakovenko is Russian Ambassador to the United Kingdom of Great Britain and Northern Ireland and served as deputy foreign minister of Russia from 2005-2011.

After the failure of the hastily arranged UN Security Council vote on a resolution that hadn’t been properly debated, Russia is once again being accused of creating obstacles to justice for the victims of the MH17 disaster. These official statements and media coverage come as no surprise to us. However, let’s face the facts.

Russia was the first state to demand a full and independent investigation of this abhorrent crime. We did everything to ensure the early adoption of Security Council Resolution 2166 that not only insisted on a proper investigation, but also, at Russia’s initiative, provided for an immediate ceasefire at the crash site. The Russian Defense Ministry has been the only one among its counterparts to publish its satellite data relevant for establishing the truth. We have declassified certain technical documentation related to the Buk missiles and provided the Netherlands with a thorough analysis of possible Buk involvement in the downing of the aircraft performed by experts from the Almaz-Antey Corporation, the missiles’ manufacturer.

We have been calling upon the Security Council to remain actively involved in the investigation by, for instance, inviting the Secretary-General to appoint a special envoy for MH-17 and providing the Council with wide-ranging proposals as to how it could help the investigation in the most effective way. Finally, we introduced an alternative draft resolution that would encourage the investigation to be more conducted more quickly, transparently and comprehensively, rather than politicize the matter further by creating an unprecedented tribunal that would have to operate under immense political pressure.

Why the rush? Is it to help the investigation, or rather to replace it? Progress towards justice must be seen. So far, we have seen nothing. Our partners preferred to conduct a vote that is impossible to explain by any other motive than seeking a fresh pretext for pointing a finger at Russia. It is only to be regretted that the unity and authority of the Security Council has once again become hostage to political ambitions having nothing to do with either justice or a peaceful resolution of the crisis in Ukraine in its entirety. For its part, Russia will continue to seek both.

*  Read the entire archive on New Cold War.org of articles on the July 17, 2014 crash of Malayasian Airlines Flight 17, here. 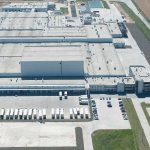 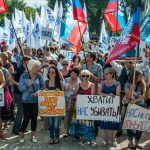