Russia, Turkey and Iran ready to be guarantors in resolving Syrian crisis 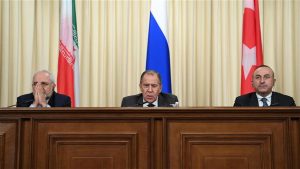 L to R, foreign ministers of Iran, Russia and Turkey hold news conference in Moscow on Dec 20, 2016 (photo by AFP)

The text of a Moscow declaration on immediate steps in resolving the Syrian crisis is being prepared. Russia, Turkey and Iran are ready to be guarantors of its implementation, Russian Defense Minister Sergey Shoigu has announced.

“Today, experts are working on the text of the Moscow declaration on immediate steps toward resolving the Syrian crisis. This is a thorough, extremely necessary document,” Shoigu said at the meeting with his Iranian counterpart Hossein Dehghan.

According to Shoigu, all previous “attempts to agree on joint efforts undertaken by the US or their partners were doomed.”

“None of them exerted real influence on the situation on the ground,” he said.

The approval of the declaration at the level of defense and foreign ministers shows a willingness to “act as guarantors and jointly resolve the urgent issues of the Syrian crisis,” Shoigu said. “That’s why we support the adoption of this declaration.”

Shoigu also met with the minister of National Defense of Turkey, Fikri Isik, who praised the operation on liberating eastern Aleppo. “Now we are observing a very successful operation to liberate eastern Aleppo from fighters, the evacuation of the families of the opposition from Aleppo,” Isik said.

Turkish Foreign Minister Mevlüt Çavusoglu is currently in Moscow for talks with Russia’s Sergey Lavrov and Iran’s Mohammad Javad Zarif. He said that the trilateral cooperation has proven its effectiveness in eastern Aleppo and called for it to spread to other parts of Syria. “A political solution is the best solution, this is what we believe,” Çavusoglu said. He added that the ceasefire should be implements in all parts of Syria, adding that the truce doesn’t concern Islamic State or Jabhat Fateh al-Sham (formerly known as Al-Nusra Front).

Zarif said that Russia, Turkey and Iran should cooperate “to end terrorism which is holding hostage everyone in Syria and in the Middle East.”

“Terrorism can’t be an instrument even for short-term political goals because it is a threat and we need to battle it,” he said.

Russia says it is drawing up a declaration document that stipulates a roadmap for ending the nearly six years of foreign-sponsored militancy gripping Syria, expressing hope that the text will gain support from Iran and Turkey. Russian Defense Minister Sergei Shoigu made the announcement at meetings in Moscow on Tuesday with his Iranian and Turkish counterparts, Brigadier General Hossein Dehqan and Fikri Isik, respectively.

“Today experts are working on the text of the Moscow declaration on immediate steps toward resolving the Syrian crisis. This is a thorough, extremely necessary document,” Shoigu said, adding that the text was aimed at achieving a ceasefire in the Arab county.

All previous efforts by the U.S. and its allies to agree on coordinated actions in Syria were “doomed to failure,” as “none of them wielded real influence over the situation on the ground,” he added.

The Russian defense minister further stressed that Tehran and Ankara’s approval of Moscow’s document shows “readiness to guarantee and jointly address concrete questions related to resolve [the crisis in] Syria.”

In another development on Tuesday, Jens Laerke, the spokesman of the UN Office for the Coordination of Humanitarian Affairs (OCHA), said the Syrian government had authorized the world body to send an additional 20 staff to eastern Aleppo, where they will monitor evacuations from the formerly militant-held region. The new deployment would “almost triple” the number of international staffers” in Aleppo, Laerke told a news briefing in the Swiss city of Geneva, adding, “The task is to monitor and observe the evacuations.”

On Monday, the UN Security Council unanimously approved a resolution urging the quick deployment of monitors.

The evacuations are part of the fragile Aleppo ceasefire deal, brokered by Turkey and Russia, that also includes the evacuation of the residents of the villages of Foua and Kefraya in Idlib Province, which have been under terrorists’ siege. Some 750 people have been taken out of the two villages so far, where 20 buses headed to early on Tuesday morning, he noted.

He made the remarks following discussions in Moscow with his Iranian and Turkish counterparts, Mohammad Javad Zarif and Mevlut Cavusoglu, respectively, citing a joint statement.

“Iran, Russia and Turkey are ready to assist in preparing the agreement in the making between the Syrian government and the opposition and to become its guarantor,” Lavrov said. “Right now the evacuation is wrapping up,” he said, voicing hope that the process would finish in a maximum of two days.

Russia launched an anti-terror air campaign in Syria on September 30, 2015 at the request of the Damascus government.

After the Aleppo rout, Turkey considers boosting the ranks of its Free Syrian Army ally fighting in Operation Euphrates Shield, while fortifying the buffer zone and raising the bar in bargaining with Damascus.

… Since July 2012, Syria’s armed opposition backed by the United States, Turkey, Qatar and Saudi Arabia has fought the Russian and Iranian-supported Syrian regime for control of Aleppo, the country’s largest city and its commercial and cultural heart until the outbreak of the civil war in 2011. After Russia sent in ground troops and commenced airstrikes against the rebels in 2015, the tide in Aleppo and its environs slowly began to turn in the regime’s favor.