The Turkish incursion into Syria does not wreck the recent Russian – Turkish rapprochement because it is only a limited rapprochement not a realignment. In the meantime Russia is working hard to reconcile the Syrian government with the Kurds. 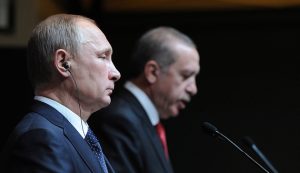 The Turkish incursion into Syria and the Turkish capture of Jarablus have been construed by some to mean that the Turkish – Russian rapprochement is a sham. According to this view, Erdogan, having secured concessions from Putin at the summit in St. Petersburg [meeting of Erdogan and Putin during St. Petersburg Economic Forum on August 9], has wasted no time dropping the mask, once again betraying his Russian “friend” by invading Syria.

In my opinion, this is the product of the over-high expectations many had of the Turkish-Russian rapprochement. As I have said on many occasions, this is a rapprochement not a realignment. Turkey may be angry with the U.S. about the coup, a fact made clear by Erdogan’s decision to send only the deputy mayor of Ankara to welcome U.S. Vice President Biden on his recent arrival in Ankara. It has not ceased to be a U.S. or NATO ally.

Nor is there any reason to think the Russians feel the Turkish incursion into Syria has “betrayed” them. For a “betrayal” to have happened, Erdogan would have had to mislead the Russians as to his intentions in Syria. On the contrary, Erdogan has never at any time said that his policies or intentions in Syria have changed. Instead, he has always said, and continued right up to the eve of the summit in St. Petersburg to say, that his policies in Syria are unchanged. He still demands that President Assad must go and he still says he wants regime change in Syria. He has even said that he does not consider Jabhat Al-Nusra – Al-Qaeda’s Syrian affiliate – to be a terrorist organisation. See my detailed discussion of all this here.

To repeat: what happened in St. Petersburg was a patching up of relations between Russia and Turkey, bringing them roughly back to where they were before the shooting down of the SU24 in November last year. A number of economic deals were agreed in outline, but there were no geostrategic shifts, none were promised or demanded or (by the Russians) expected, and it was unreasonable to expect them.

As it happens, the Turks say they informed the Russians in advance of their intention to move on Jarablus and that the Russians gave the green light for it.

That is completely plausible. The Russians understand that for Turkey, the setting up of an autonomous YPG-controlled Kurdish autonomous zone along Turkey’s border with Syria is unacceptable and that the Turks will act decisively to prevent it. Short of going to war with Turkey, Russia cannot prevent Turkey from acting in this way and it has no reason to offend the Turks by trying to do so.

The key point to understand about the Turkish incursion is that no part of it involves areas of Syria under the Syrian government’s actual control. All this area is controlled either by the YPG or by ISIS.

Nor is this area critical to the Syrian government’s survival. The latter depends on the Syrian government retaining its hold on Damascus and Aleppo, the central towns of Hama and Homs, the key region of Latakia, and ultimately by recapturing the town and province of Idlib. If the Syrian government achieves all this, then it will have secured its existence, which is the objective the Russians set themselves when they intervened in Syria last year.

In the meantime, the Russians no doubt calculate – as do the Syrians – that the north east of Syria can be left to look after itself, and that what the Turks get up to there – far away from the key battlefields in Damascus and Aleppo provinces and in Idlib province – in the end in military and strategic terms simply does not matter. Whilst that may sound ruthless, it is the sort of ruthless calculation that sometimes has to be made in war.

That does not mean that the Russians are completely uninterested in what is going on in northeastern Syria. However, the focus of their concern will not be the Turkish incursion. Rather, it is the recent breakdown in relations between the Syrian government and the Kurdish militia the YPG.

The already severely overstretched Syrian army hardly needs more enemies in Syria, and the Russians will want to prevent the present tensions between the Syrian army and the YPG escalating into full-fledged fighting at all costs.

That this is, for the Russians, the key issue in north east Syria at the moment has just been confirmed at the latest Russian Foreign Ministry briefing by Maria Zakharova, Russia’s impressive Foreign Ministry spokeswoman:

As far as the situation in Syria’s Hasakeh is concerned, we are extremely worried over the sharp armed escalation in that city in the northwest of Syria between government troops and Kurdish militias. Russia has been taking proactive steps along different channels with the aim of preventing fratricidal clashes. We are urging the parties to display restraint. We are urging the parties to display restraint, wisdom and political conscience and responsibility and to develop the awareness all patriots have only one common enemy – terrorists. It is obvious that terrorism is a common threat to all Syrians, who share one goal, that of saving Syria, in which all of its citizens irrespective of their ethnicity or religion should feel comfortable.

The Russians have acted on these pleas by (as Zakharova says), taking positive action on the ground by seeking to broker truces between the Syrian government and the YPG in both Al-Hasakeh and in Aleppo, so far it must be said with only mixed results.

The Russians do possess leverage over both parties. The Syrian government is now completely dependent on Russia for its survival, whilst Russia is the only remaining power that continues to show some sympathy for the demands for autonomy made by the YPG. As recently as April – at a time when relations between Russia and Turkey were still very bad – the Russians were demanding that the Kurds be separately represented at the Geneva peace talks. The Russians have not retreated from this position. They will doubtless be reminding the YPG that if they want a role in the negotiations – and thus a role in determining the future of Syria – then in a hostile region they will need continued Russian support.

In such a fraught situation, it is not beyond reason that the Russians might quietly welcome a Turkish incursion that would (as they might see it) concentrate minds on the part of the YPG – showing to the YPG who their true friends and their true enemies are and why the U.S. cannot be relied upon as a long term ally.

My colleague Alex Christoforou has recently pointed out how in this region it is the Russians who are increasingly the peacemakers, even as the U.S. constantly acts to spread war there.

Related reading on The Duran:
Turkey’s illegal invasion of Syria proves Erdogan is no friend of Russia, by Adam Garrie, Aug 26, 2016 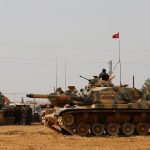