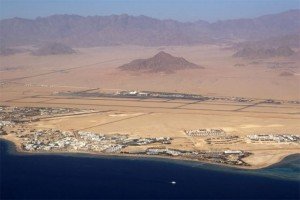 Below is the latest news report on RT.com of the investigation into the October 31, 2015 crash of the Russian Kogolymavia (Metrojet) tourism flight over Sinai, Egypt. The plane crashed 20 minutes after departing the Red Sea tourism city of Sharm El-Sheikh.

For several days, the British and U.S. governments have been peddling unsubstantiated rumour that a bomb brought down the plane. Here are examples of the rumour-peddling:

British and U.S. spies intercepted “chatter” from suspected militants and at least one other government suggesting that a bomb, possibly hidden in luggage in the hold, downed the airliner, Western intelligence sources said. The intelligence sources, who spoke on condition of anonymity due to the sensitivity of the situation, said the evidence was not categorical and there was still no hard forensic or scientific evidence to support the bomb theory.

From The Guardian on Nov 4, headlined ‘Russian plane crash in Egypt may have been result of bomb, U.S. and UK say’:

U.S. officials believe that the cause of the crash involving the Russian airline over Egypt’s Sinai peninsula at the weekend was “most likely” a bomb planted by ISIS or an ISIS affiliate, according to reports by U.S. television news networks. Among them, CNN stated it has been told that U.S. intelligence has not yet reached a formal conclusion.

… A U.S. official has told the AFP news agency that a bomb on the Russian plane which went down over Egypt’s Sinai Peninsula, with the loss of more than 220 lives, is a “highly possible scenario”… But the official cautioned: “I am not saying it’s a definitive statement of what happened.”

… Britain’s Foreign Secretary has said [on Wednesday, Nov 4] that there was a “significant possibility” that the Russian airliner which crashed into Egypt’s Sinai Peninsula at the weekend was brought down by a bomb.

From Reuters on Nov 4 we read:

Britain said on Wednesday that the Russian plane that crashed in Egypt after taking off from Red Sea resort of Sharm al-Sheikh might have been brought down by an explosive device. “While the investigation is still ongoing we cannot say categorically why the Russian jet crashed,” Prime Minister David Cameron’s office said in a statement.

U.S. President Barack Obama raised the possibility Nov. 5 that a bomb brought down a Russian plane that crashed over Egypt’s Sinai Peninsula, undermining efforts by Cairo and Moscow to downplay the suggestion of an attack…

“I think there is a possibility that there was a bomb on board and we are taking that very seriously,” Obama told a US radio station, while emphasising it was too early to say for sure.

Providing no hard evidence, British Foreign Secretary Philip Hammond announced on November 5, “We have formed a judgement that there is a significant possibility that the Russian aircraft was brought down by an explosive device on board.” Yet 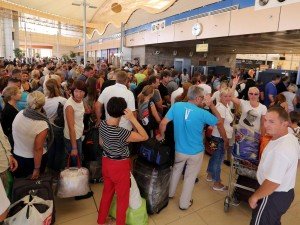 It has been a week of chaos at the airport at Sharm El-Sheikh as international flights have been cancelled and chaotic and selective “security” checks inside the airport are ongoing. Russia and other countries are sending flights to Cairo and Sharm el-Sheikh to evacuate tourists and other visitors to Egypt.

Egypt is the largest overseas tourist destination of Russians. The aftermath of the crash of the aircraft will severely damage Egypt’s tourism industry as well as the businesses of Russian tour operators.

Meanwhile, on November 5, British Prime Minister David Cameron welcomed Egypt’s military dictator Abdel Fatah al-Sisi to a state visit to the UK. Writer Jack Shenker wrote in the Guardian on October 31, “Sisi – who has presided over the state killing of more than 2,500 political opponents since removing his predecessor, the Muslim Brotherhood’s short-lived president Mohamed Morsi [on July 3, 2013]– has been traveling the globe recently in an effort to adorn himself with the baubles of international legitimacy, something the UK government is keen to help with.”

President Vladimir Putin has agreed with the Federal Security Service to halt all Russian flights to Egypt following an October 31 passenger plane crash in Sinai that killed all 224 people on board.

“As long as we haven’t established the causes of the incident, I consider it appropriate to suspend the flights of Russian aircraft to Egypt. This primarily applies to the tourist flow,” FSB director Aleksandr Bortnikov told a meeting of the Russian Anti-Terror Committee on Friday.

Egypt has provided Russian investigators with access to all the fragments of the crashed plane as well as the baggage, he said. There is need for “absolute objectivity” and “confirmed data” to establish the causes of the disaster, he added.

Kremlin spokesman Dmitry Peskov said that Putin agreed with the recommendations of the Federal Security Service (FSB). He added that Putin had instructed the government to ensure the safe return of Russian citizens from Egypt and to cooperate with the Egyptian authorities on establishing air traffic security.

The flights will be suspended until a “proper level of air communication security” is established, he said.

Peskov said that the decision to suspend flights was “solely connected with security” reasons, and doesn’t suggest that Moscow considers the A321 crash to be a terrorist attack.

Around 45,000 Russians are currently on holiday in Egypt, TASS cited figures provided by Russia’s tourism agency.

An operational HQ headed by deputy PM Arkady Dvorkovich and under Russia’s tourism watchdog, Rostourism, will be resolving issues connected with the return of Russian citizens from Egypt, according to a statement by the Cabinet of Ministers.

“Swabs and scrapings from all fragments of the [crashed] plane, baggage and soil have been taken by Russian experts,” said the head of the Russian Emergencies Service, Vladimir Puchkov, during the meeting.

“I underline once more that the necessary samples have been taken from all the elements that can contain traces of explosives,” he added. “If there were explosives on the plane, we will be able to determine it.”

The Airbus A321 belonging to Russian Kogalymavia, which uses the brand name Metrojet, crashed in Egypt 20 minutes after takeoff from Sharm el-Sheikh airport on October 31. All 217 passengers and seven crewmembers on board died in the disaster, making it the deadliest incident of this kind in Russian aviation history. There was no distress call prior to the crash.

Following the disaster, the head of Russian aviation agency Rosaviatsia, Aleksandr Neradko, said that all the signs suggested that the destruction of the plane occurred “in the air and at a great altitude.” The evidence for that was the remains of the plane and the bodies, which have been scattered over an area measuring about 8 km by 4 km, he said.

The airline of the ill-fated passenger jet said on Monday that the plane must have been damaged by a force in flight and couldn’t have just broken apart.

On Tuesday, U.S. media cited sources in the intelligence community saying that that a U.S. infrared satellite had detected a heat flash in the same vicinity, indicating that an explosion may have occurred on board.

On Thursday, UK Prime Minister David Cameron announced that it was “more likely than not” that a bomb caused the crash. His comments were met with doubts from Moscow. During a telephone conversation between Cameron and Putin on Thursday, the PM was accused of “acting before he knows the facts,” according to tabloid paper the Sun.

On Wednesday, Britain halted flights from and to the resort city of Sharm el-Sheikh over concerns that the Russian passenger jet was downed by a bomb on board.

Earlier in the week, a militant group associated with Islamic State (IS, formerly ISIS) claimed to have shot down the Russian plane, but this claim has been deemed unreliable. 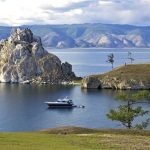 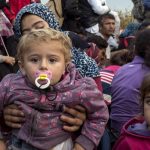 Merkel under fire in Germany as refugee crisis worsensMultipolarity