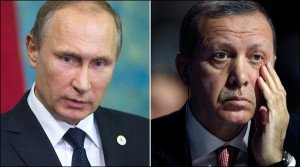 Russian President Vladimir Putin has once again charged that he has solid information confirming that Isis (Daesh) terrorists are making oil sales via Turkey.

“At the moment we have received additional information confirming that that oil from the deposits controlled by Daesh militants enters Turkish territory on industrial scale,” said Putin on the sidelines of a climate change summit in Paris on Monday, according to PressTV. [Report below].

“We have every reason to believe that the decision to down our plane was guided by a desire to ensure security of this oil’s delivery routes to ports where they are shipped in tankers,” he added.

Putin’s open allegations were instantly addressed by Turkish President Recep Tayyip Erdogan who was also present at the conference. He stated that he would quit as President if there was any proof available of Turkey’s tie-up with Isis on oil.

“We are not that dishonest to buy oil from terrorists. If it is proven that we have in fact done so I will leave office. If there is any evidence, let them present it, we’ll consider [it],” he said.

Russia’s allegations come swiftly on the heels of Iraqi lawmaker Mowaffak al-Rubaie stating on Sunday that Isis has made over $800 million dollars in black market oil sales in Turkey over the last eight months.

“This is Iraqi oil and Syrian oil, carried by trucks from Iraq, from Syria through the borders to Turkey and sold… [at] less than 50 percent of the international oil price,” he was quoted as saying by PressTV.

He also accused the United States of ignoring the illegal oil sales by not targeting Isis trucks that carry Iraqi and Syrian oil. The US considers these trucks as ‘civilian targets’ unlike Russia which has be hitting the oil supply truck lines hard ever since it launched its air strikes in Syria against Isis.

Mowaffak al-Rubaie told Sputnik news on Monday:  “I have personally contacted US representatives asking them to target ISIL trucks transporting Iraqi and Syrian oil to Turkey only to be told that those were civilian targets so they could not attack them.” Rubaie is a leader of the State of Law Coalition party in the Iraqi parliament and former national security adviser.

Moscow has grounds to suspect that Turkey shot down a Russian Su-24 on November 24 to secure illegal oil deliveries from Syria to Turkey, Vladimir Putin said on the sidelines of the climate change summit in Paris on Monday. 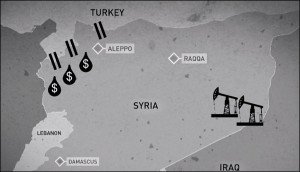 “At the moment we have received additional information confirming that that oil from the deposits controlled by Islamic State militants enters Turkish territory on industrial scale,” he said. “We have every reason to believe that the decision to down our plane was guided by a desire to ensure security of this oil’s delivery routes to ports where they are shipped in tankers.”

Speaking in Paris on Monday, President Recep Erdogan said that he will leave office if there is proof of Turkey’s cooperation with IS.  “We are not that dishonest as to buy oil from terrorists. If it is proven that we have, in fact, done so, I will leave office. If there is any evidence, let them present it, we’ll consider [it],” he said, as quoted by TASS.

The countries from which Turkey buys oil are “well known,” said Erdogan.

He called on Russia to comment on the U.S.’ recent black-listing of Kirsan Ilyumzhinov, the World Chess Federation President, accusing him of “materially assisting and acting for or on behalf of the Government of Syria.” Erdogan alleged Ilyumzhinov had been dealing with Islamic State oil.

Terrorists have been abusing the visa-free regime between Russia and Turkey to move freely, the Russian leader said adding that Ankara failed to address the issue after Russia raised it. “We have been asking [Ankara] for a long time to pay attention” to the threat posed by some terrorists active in separate regions of Russia, including the northern Caucuses, that have been “emerging on Turkish territory,” Putin said.

Moscow has asked Ankara to “stop this practice,” he added, but pointed out that “we have traced some located on the territory of the Turkish Republic and living in regions guarded by special security services and police that have used the visa-free regime to return to our territory, where we continue to fight them,” he added.

Answering a question as to whether Moscow wants to form a broad based anti-terrorist coalition, Putin said Russia has always supported this initiative, “but this cannot be done while someone continues to use several terrorist organizations to reach their immediate goals.”

Putin admitted that he was personally saddened by the deterioration of relations with Turkey. He explained that “problems do exist and they emerged a long time ago and we have been trying to resolve them in dialogue with our Turkish partners.”

Putin said he has heard Ankara’s claims that it was not Erdogan who made the decision to down the Russian jet. However, he stressed that for Russia “it doesn’t really matter” which official made the decision. “As a result of this criminal campaign our two soldiers died – a crew commander and a marine, who was part of the rescue team of the [Su-24] crew,” he said, adding that Turkey’s actions had been “a huge mistake.”

Russo-Turkish relations have deteriorated in the wake of the downing of Russia’s Su-24 by Turkish jets over Syria on November 24. Russia imposed a package of economic sanctions against Turkey last Thursday, which included banning several Turkish organizations and the import of certain goods, as well as cancelling the visa-free regime for Turkish citizens travelling to Russia starting next year.

Speaking on the sidelines of the summit, Erdogan said that Ankara will act “patiently, not emotionally” before imposing any counter-measures.

Meanwhile, ahead of the summit, Turkish Prime Minister Ahmet Davutoglu stated that Ankara will not apologize “for doing our duty.”

Putin and Erdogan were hoping to meet at the environmental summit taking place in Paris, but Putin said that no meeting was held on Monday.

“In the last eight months ISIS has managed to sell … $800 million dollars worth of oil on the black market of Turkey. This is Iraqi oil and Syrian oil, carried by trucks from Iraq, from Syria through the borders to Turkey and sold …[at] less than 50 percent of the international oil price,” Mowaffak al Rubaie said in an interview with RT.

“Now this either get consumed inside, the crude is refined on Turkish territory by the Turkish refineries, and sold in the Turkish market. Or it goes to Jihan and then in the pipelines from Jihan to the Mediterranean and sold to the international market.”

“Money and dollars generated by selling Iraqi and Syrian oil on the Turkish black market  is like the oxygen supply to ISIS and it’s operation,” he added. “Once you cut the oxygen then ISIS will suffocate.”

The Iraqi MP said there is “no shadow of a doubt” that the Turkish government knows about the oil smuggling operations. “The merchants, the businessmen [are buying oil] in the black market in Turkey under the noses – under the auspices if you like – of the Turkish intelligence agency and the Turkish security apparatus,” he said.

Citing Iraqi intelligence services, Mowaffak al Rubaie also accused Turkey of providing medical treatment to terrorists in hospitals along the border and at times even in “Istanbul itself.”

“There are security officers who are sympathizing with ISIS in Turkey,” the Iraqi politician believes. “They are allowing them to go from Istanbul to the borders and infiltrate … Syria and Iraq.”

“There is no terrorist organization which can stand alone, without a neighboring country helping it – in this case Turkey,” Rubaie said, urging Ankara to come clean and join the international efforts to destroy the terror group.

Russia considers ISIS oil smuggling operations to be one of the highest priority targets in crippling the terror group’s finances and capabilities. Moscow has long been requesting that Ankara properly addresses reports of its alleged involvement with ISIS oil smuggling.

President Putin himself noted that it was “hard to believe, but it is theoretically possible” that the Turkish leadership knows nothing about oil flowing into Turkey illegally. However he noted that the operations are too daring and obvious to ignore.

“Vehicles, carrying oil, lined up in a chain going beyond the horizon,” said Putin, comparing the views seen by Russian pilots and drones to a “living oil pipe” stretched from ISIS and rebel controlled areas of Syria into Turkey.

“Day and night they are going to Turkey. Trucks always go there loaded, and back from there – empty,” Putin said earlier this week. 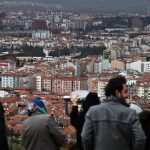 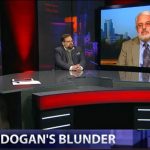