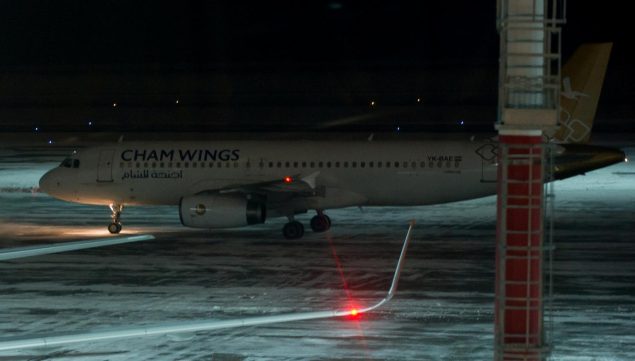 Russia accused the Israeli army of using a civilian flight carrying 172 passengers as a shield during its air strikes on targets in Syria on Thursday.

According to Russian defence ministry spokesman Igor Konashenkov, the passenger plane was flying from Tehran to Damascus International Airport, but made an emergency landing at Russia’s Hmeimim air base near Latakia in northwest Syria after coming under fire from Syrian air defences.

“The recourse to civilian aircraft as cover or to block a riposte by Syrian forces during military air operations has become characteristic of the Israeli air force,” the ministry spokesperson said in a statement published by Russian media on Friday.

Israeli radars have “a clear view of the situation in the skies around Damascus airport”, Konashenkov said, accusing Israel of “making a total mockery of the lives of hundreds of innocent civilians”.

Syria on Thursday said it had intercepted Israeli missiles on military targets in Damascus and the south of Syria.

An opposition group said 23 Syrian and foreign soldiers allied with President Bashar al-Assad’s government were killed in the attacks.

Israel has yet to comment on the air strikes, but it has repeatedly bombed Iranian militia targets in Syria, which it says aim to end Iran’s military presence in the war-torn country.

“At the time of the attack by Israeli planes… an Airbus-320 airliner was on approach to landing… in the death zone of air strikes and artillery,” he said.

The “quick reaction” of air traffic controllers at Damascus airport enabled the A320 to leave the zone “which was in the firing line of Syrian anti-aircraft defence systems”.

While Russia did not name the airline, data from Flight Radar indicated it was a Syrian Cham Wings plane.

Last month, Iran said it unintentionally shot down a Ukraine International Airlines civilian flight in Tehran, killing all 176 people on board.

The disaster took place in the midst of heightened tensions in the region after the US killed Iran’s top military commander Qassem Soleimani in Iraq on 3 January.

Iran and its allied Lebanese group, Hezbollah, have backed Assad in the devastating nine-year war that has killed half a million people and displaced millions more.

Russia joined Assad and his allies in 2015, supplying his army with its S-300 air-defence system after Syrian defence systems shot down a Russian aircraft by mistake during an Israeli raid last September, killing all 15 people on board.