Russia challenged at the UN Security Council on November 7 the findings of an investigation that blamed the Syrian government for a sarin gas attack on April 4, 2017 as the top United Nations body weighed the future of the panel. 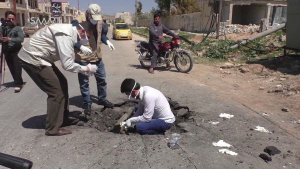 Russian Deputy Ambassador Vladimir Safronkov said the work of the investigative panel was “deeply disappointing” and suggested it was being used by the West to incriminate President Bashar al-Assad’s regime. The Joint Investigative Mechanism (JIM) concluded in a report last month that the Syrian government was responsible for the April 4 sarin attack at Khan Sheikhun that killed scores of people, including children. [See note below on the origin of the Joint Investigative Mechanism of the Organisation for the Prohibition of Chemical Weapons (OPCW).]

Russia, Syria’s ally, and the United States have put forward competing draft resolutions on extending the work of the panel after its mandate expires on November 16.

“We are convinced that the mechanism, endowed with such high responsibility, cannot work in this way,” Safronkov told the council. “Without a comprehensive change, it will become a tool to settle accounts with the Syrian authorities.” Russia maintains the report is not credible because the experts did not go to Khan Sheikhun and worked from samples Moscow maintains may have been tampered with by Western intelligence.

Presenting the findings, Edmond Mulet, the head of the panel, said the experts had established that the sarin was dropped in an air strike and that Syrian aircraft were in the area when the attack took place. Analysis of the sarin used at Khan Sheikhun matched those of the nerve gas found in Syrian stockpiles, Mulet said, adding that this composition “would be very difficult to replicate”.

Safronkov shot back that “the chemicals could have been produced anywhere to compromise intentionally the authorities of Syria.”

The United States again appealed for extending the work of the panel that was set up in 2015 to determine who is behind chemical attacks in Syria’s six-year war. “Anyone who prevents us from achieving this goal is aiding and abetting those who have been using chemical weapons in Syria,” said U.S. Ambassador Nikki Haley. “They are helping to ensure, not just that more women and children will die, but that those women and children will die in one of the cruellest, most painful ways possible.”

France and Britain came out strongly in support of the findings and said the panel must be allowed to continue its work while China, which works closely with Russia at the council, called for agreement.

Russia’s draft resolution calls for a six-month extension of the panel but said it would “retain its findings” on Khan Sheikhun “until such time when full-scale and high-quality investigation on the site of an incident becomes possible.”

The United States circulated a new draft text on Tuesday that called for an 18-month extension, instead of two years as initially proposed.

Russia in late October vetoed a U.S.-drafted resolution that would have extended the mandate of the JIM for a year, casting its ninth veto at the Security Council to block action against its Syrian ally. Moscow said it wanted to examine the report on Khan Sheikhun before deciding whether it should continue its work.

There has been no request for a vote at the council from either the United States or Russia and diplomats said negotiations were continuing.

Italian Ambassador Sebastiano Cardi told reporters after the meeting that there was strong support for renewing the mandate of the JIM and that agreement was possible.

Note by New Cold War.org:
The Joint Investigative Mechanism of the Organisation for the Prohibition of Chemical Weapons (OPCW) was created in 2015 by a resolution of the UN Security Council to investigate claims of chemical weapons usage in Syria. Wikipedia. The current head of the JIM is Edmond Mulet, a Guatemalan diplomat. He served twice as head of the failed but ongoing military occupation regime of the UN Security Council in Haiti (known as ‘MINUSTAH’ until a recent name change). Among many other failings and crimes, MINUSTAH is directly responsible for the cholera epidemic which its soldiers brought to Haiti in October 2010. The epidemic compounded the disastrous aftermath of the earthquake which struck near Haiti’s capital city on January 12, 2010. More than 10,000 Haitians have died from the cholera epidemic.

The OPCW-UN investigation into the chemical attack in Syria’s Idlib province on April 4, 2017 is littered with “systemic deficiencies,” Russia’s deputy UN envoy has told the UN Security Council, reiterating that Moscow maintains the April 4 incident was staged.

On October 26, the OPCW-UN Joint Investigative Mechanism (JIM) issued a report in which it pinned blame on Damascus for the incident at Khan Shaykhun on April 4. With JIM’s mandate set to expire on November 16, Russia criticized the methodology of the UN fact-finding mission, casting doubt on the mandate’s extension.

“Without a comprehensive change it will become a tool to settle accounts with the Syrian authorities,” Russian deputy representative to the United Nations, Vladimir Safronkov, told the Security Council.

America’s UN envoy, Nikki Haley, meanwhile tried to rally other members of the UN Security Council (UNSC) to renew JIM’s mandate. “Anyone who prevents us from achieving this goal is aiding and abetting those who have been using chemical weapons,” she said. “They are helping to ensure, not just that more women and children will die, but that those women and children will die in one of the cruelest, most painful ways possible.”

After carefully reviewing the “deeply disappointing” conclusions of the probe, Moscow blasted the report which it believes is full of “systemic deficiencies” and speculation, and drawn from statements by questionable sources. Noting that JIM’s report cannot withstand any “serious criticism,” the Russian diplomat said the UN team did not even consider Moscow’s version of events, according to which the entire incident was “choreographed.”

Moscow questioned the validity of biomedical and other samples that were obtained at the scene of the alleged attack. JIM’s report, which is “full of omissions, inconsistencies and contradictions is very mediocre,” Safronkov said. “They did not comply with the basic principle of the chain of custody of the material evidence.”

Russia also accused JIM of implementing their mandate “very selectively without the use of the whole range of methods,” which requires first and foremost “collecting samples, questioning witnesses and gathering evidence directly at the site of the incident.”

The JIM mission never actually visited the site of the alleged attack, Russia pointed out, saying the experts relied on evidence collected by the militant groups controlling the area. The investigation also failed to properly inspect the Shayrat Airbase, Moscow said, explaining that while the experts visited the Syrian airfield, they did not collect ground samples there.

“OPCW worked under the assumption that sarin gas was delivered by a plane, despite failing to gather samples at the Shayrat Airbase site, after finally consenting to visit the strip,” the Russian diplomat said, emphasizing that gathering samples at the base was “crucial to determine the attribution of responsibility.”

Some of the evidence gathered by the UN team, Safronkov said, came from highly questionable sources, particularly the ‘White Helmets’ group that has ties to extremists in Syria.

“OPCW’s mission was not able to obtain key material evidence. All conclusions of their work were based on indirect testimonies, most of which was provided by the opposition and by NGOs that have no credibility, such as the White Helmets which are closely associated with Jabhat al-Nusra terrorists. So to take at face value the information by White Helmets is at very least in not very good taste,” Safronkov told members of the UNSC.

The report also failed to properly explain the delivery of sarin gas to the site in Idlib, Safronkov stated, adding that the traces left by the explosion and the lack of fragments suggest the bomb was placed on the ground. Safronkov pointed out that the crater in Khan Shaykhun was rectangular which is characteristic of a detonation from “a horizontal static position,” while an air dropped bomb would have left an elliptical crater.

The possibility of a staged attack is also “confirmed by the traces of burning at the surface of the cement,” the diplomat said, noting that the “edges of the crater are not turned outward [as would have been the case with the aerial bomb], and there is no ground dispersed around it.” The fact that the impact crater was filled with cement “very soon after the incident,” points to “someone really trying to destroy evidence.”

JIM’s findings, however, contradict Russia’s analysis. Presenting the conclusion of the investigation, the head of the panel, Edmond Mulet, said the experts established that sarin was dropped by a Syrian air strike, claiming the chemical used in Idlib matched those samples previously found in Syrian stockpiles. Such a composition “would be very difficult to replicate,” Mulet said.

Safronkov swiftly challenged that assumption, saying, “the chemicals could have been produced anywhere to intentionally compromise” Syrian authorities. “Admixtures found in the samples cannot be considered as unique markers which are found in the characteristic only for Syrian binary technology for producing sarin,” he elaborated further.

Safronkov also questioned some of the visual evidence referenced in the UN report, noting that the White Helmets apparently knew about the attack even before the Syrian airplane left the Shayrat Airbase. The White Helmets video at the site of the incident shows them wearing respirators and cotton gloves which cannot serve as protective gear against sarin exposure. Thus it is likely that “first an explosion was conducted, then the White Helmets made this video, and only afterward did they drop sarin,” the Russian representative pointed out.

An estimated 74-100 or more civilians were killed and hundreds were injured in the April 4 attack, according to various reports. Washington then rushed to blame Damascus based on open-source intelligence, while the Syrian government strongly denied responsibility for the incident.

On April 7, U.S. President Donald Trump authorized the firing of 59 Tomahawk cruise missiles at the Syrian military airfield in Shayrat, from where U.S. intelligence said the chemical attack was launched. 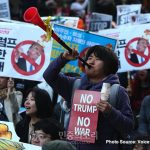 Protests across South Korea as Trump arrives on official visitMultipolarity 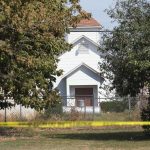 The anatomy of a national nervous breakdown in the USAMultipolarity