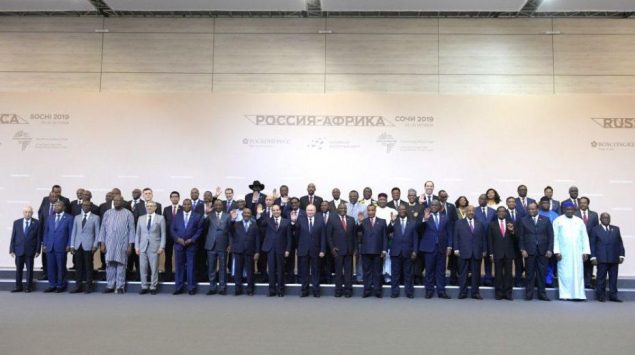 The growing presence of nations such as China and Russia on the continent of Africa are increasingly seen as beacons of hope for a new generation of Africans who recognise in this Eurasian alliance an opportunity to capture the future they were robbed of over half a century ago.

A long night of suffering has kept one of the richest continents on the globe in a state of virtual dark age for over a century. Although the age of science has given humanity the means to access the highest standards of living in world history, 2019 has seen 15 000 children die of preventable deaths every day (illness, starvation and murder) with half occurring in Sub Saharan Africa. In a world of advanced energy technology, only five of 54 African countries have access to 100% electrification and all are North African.

Africa’s dark situation was never due to simplistic terms like “corruption” or “incompetence”, nor was Africa ever “culturally incompatible” with western technology as some racists have taught in social science classes. The truth is that Africa was never given true independence as is popularly believed. Sure there was nominal independence, but the economic independence needed to become sovereign nations on the continent was never granted by the empire.

This is why the growing presence of nations such as China and Russia on the continent are increasingly seen as beacons of hope for a new generation of Africans who recognise in this Eurasian alliance an opportunity to capture the future they were robbed of over half a century ago.

The Russian African summit in Sochi

A watershed moment in this systemic change has occurred with the first Russia-Africa Economic and Security Summit in Sochi (Oct. 23-24) co-chaired by President Putin and Egypt’s President el-Sisi, featuring 50 African heads of State alongside 3000 representatives of business, government, and finance. This summit was the first of its kind, and followed hot off the heels of China’s first China-Africa Economic and Security Summit which was held in July 2019. In the past two years, 40 African states have signed onto China’s Belt and Road Initiative which has scared many imperially minded technocrats in the west.

In an interview leading up to the Summit, President Putin beautifully echoed the Chinese philosophy of win-win development for Africa:“We are not going to participate in a new ‘repartition’ of the continent’s wealth; rather, we are ready to engage in competition for cooperation with Africa, provided that this competition is civilized and develops in compliance with the law. We have a lot to offer to our African friends.”

While it does not have the same level of investments as China (which leads the world with $200 billion/year), Russia’s investments have quadrupled since 2009 now clocking it at $20 billion/year and growing with a focus on rail, energy diplomacy, education, culture sharing and military assistance. Russia is currently building Egypt’s first nuclear reactor in El Dabaa, and is negotiating with several other nations such as Ethiopia, Nigeria and Kenya to go nuclear which will end the policy of technological apartheid imposed onto Africa for decades. Russia has announced the construction of an Africa Center of Excellence and Nuclear Power in Ethiopia and the Russian Academy of Sciences announced branches opening up across Africa. A vital driver for development, Russian Railways is working to construct trans-border and intra-border rail in Ghana, Burkina Faso, Nigeria, Libya, Egypt and East Africa (just to name a few). During the summit, Russia announced a cancellation of a $20 billion African debt as an act of goodwill.

President Putin pointed out the elephant in the room when he said: “We see a number of Western states resorting to pressure, intimidation, and blackmail against governments of sovereign African countries. They hope it will help them win back their lost influence and dominant positions in former colonies and seek—this time in a ‘new wrapper’—to reap excess profits and exploit the continent’s resources without any regard for its population, environmental or other risks. They are also hampering the establishment of closer relations between Russia and Africa—apparently, so that nobody would interfere with their plans”

Unlike the west, Russia has the advantage of having encouraged African development during the dark days of the Cold War and is thus infinitely more trusted than the west, whose positive attempts to genuinely help Africa develop (as seen under the leadership of John F. Kennedy, Italian Industrialist Enrico Mattei or President de Gaulle) ended with either assassinations or coups.

Some may call Putin’s words anti-west hyperbole, but a comparison of the quality of investments Russian vs American into Africa demonstrates the two opposing intentions referenced by Putin.

The trap of conditionalities

Where US Aid, the World Bank and IMF have poured billions of dollars into Africa over decades, standards of living, and stability of those recipient nations have only plummeted. This is the opposite result one would expect from such “generous” behaviour. Why?

The answer can be partly be found in the shift towards IMF/World Bank conditionalities which grew out of a monstrous paradigm shift that occurred in the 1950s-1970s. Where leaders such as Franklin Roosevelt and his ally Henry Wallace envisioned an industrialized Africa liberated from colonialism, the Bretton Woods instruments they created to provide long term low interest loans internationally were cleansed of anti-colonial leaders and replaced with deep state tools early in the Cold War ensuring that any credit issued would be tied to deadly conditionalities as exposed by John Perkins in his book Confessions of an Economic Hitman.

Under this neo-colonial formula, Africa was allowed to get money. But those dollars would no longer be “permitted” to be invested into genuine nation building or advanced technological progress as Patrice Lumumba, Kwame Nkrumah or Thomas Sankara intended. Only “appropriate technologies” such as windmills or solar panels were permitted. Small wells were ok, but major water/energy projects like hydroelectric dams or Great Manmade Rivers were not allowed. Certainly no nuclear power was permitted (unless you happened to be an apartheid state run by white racists of course). Oil drilling and mining investments were ok, but only if foreign companies like Barrick Gold or Standard Oil did the work and none of the revenue or electricity benefited the people. Without the means of producing real wealth (defined as combination of material, intellectual and spiritual growth), Africa’s productive powers of labor collapsed with their sovereignty and the debts only grew.

It is no secret that just as China began outpacing the Americans in African investment in 2007. Rather than acting intelligently to increase genuine infrastructure funding as the Chinese had done, the US Deep State not only continued its outdated debt-slavery practices, but created AFRICOM as a military arm across the continent. Ironically AFRICOM’s presence coincided with a doubling of militant Islamist activities since 2010 with 24 groups now identified (up from only 5 in 2010) and a 960% increase in violent attacks from 2009-2018. Just as western lending has caused a pandemic of slavery, so too has western security forces only spread mass insecurity.

The fact is that the neo cons infesting the Military Industrial Complex have openly identified both countries as co-equal enemies to the USA and understand that this alliance represents an existential threat to their hegemony. Speaking at the Heritage Foundation last year, former National Security Advisor John Bolton said (without blushing): “The predatory practices pursued by China and Russia stunt economic growth in Africa; threaten the financial independence of African Nations; inhibit opportunities for US investment… and pose a threat to US national security interests.”

His words were bolstered by acting head of AFRICOM Thomas Waldauser in Feb. 2019 “To thwart Russian exploitative efforts, USA AFRICOM continues to work with a host of partners to be the military partner of choice in Africa.”

Luckily for the world, Bolton and Waldauser were both flushed from their posts by an American President who has chosen to ally with Russia and China rather than risk World War III. However, the dangerous ideology and deep state power structure they represent is not yet defeated, and with Trump’s intention to pull troops out of Syria, these psychotic forces are as dangerous as ever.