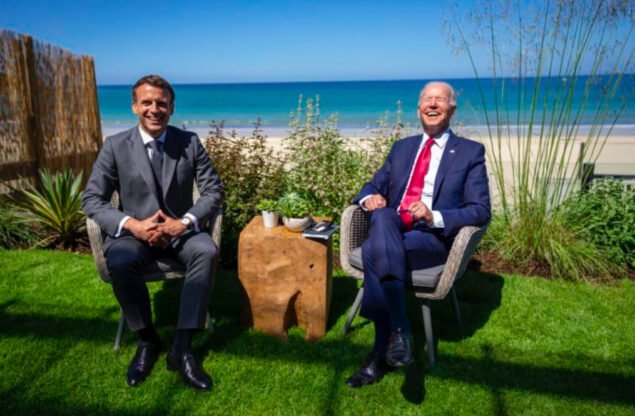 The diplomatic fallout from the new security agreement between the Australia, United Kingdom and the United States [AUKUS] is just about beginning. The debris will take time to clean up. Might there be some lasting damage?

The diplomatic fallout from the new security agreement between the Australia, United Kingdom and the United States [AUKUS] is just about beginning. The debris will take time to clean up. Might there be some lasting damage?

It now emerges that not only was no attempt was made to include France in the AUKUS security pact, the old Anglo axis conspired to keep French President Emmanuel Macron in the dark. The Sunday Telegraph reported September 19 that the AUKUS deal was ironed out during the G7 Summit in June at Cornwall, but Macron who was also in attendance was unaware of what was happening behind his back amidst all the bonhomie.

Macron loses face. The Guardian earlier reported that clandestine discussions on the deal went on for months before in the US, sans Paris’ knowledge. The world’s cameras have caught the stupefaction, fury and depth of emotion of the French.

Foreign minister Jean-Yves Le Drian has described it as a “stab in the back” that constituted “unacceptable behaviour between allies and partners”. And in a virtually unprecedented step among allies, Macron ordered the recall of the French ambassadors to Washington and Canberra.

Jean-Yves Le Drian told the French TV yesterday, “There have been lies, there has been duplicity, there has been a major rupture of trust. There has been contempt. So, it is not going well between us, not at all. That means there is a crisis. We are recalling or ambassadors to try to understand but also to show to our former partner countries we have very strong discontent. Really, a serious crisis between us.”

The repercussions on French-Australian ties will be severe. France is a Pacific power also (unlike Britain), and Canberra’s nearest significant eastern neighbour is the French archipelago of New Caledonia.

Australia needs the French to secure an EU free-trade agreement. An Australia-European Union FTA, now in the balance, has the potential to open up a market for Australian exporters of almost 450 million people, with a GDP of more than $US15 trillion.

Officials in Brussels told CNN that the timing of the AUKUS announcement was rude, as the EU’s high representative on foreign affairs was set to deliver his own strategy for the Indo-Pacific on Thursday, conveying the impression that the EU is not taken seriously as a geopolitical player.

A senior EU official told CNN caustically that this was “English-speaking countries” who are “very belligerent” forming an alliance against China, and these were the same nations who took the lead in invading Afghanistan and Iraq — “And we all know the results.”

The CNN: “The EU’s strategy for handling China differs from the US in one major way: the EU actively seeks cooperation with China, and sees it as an economic and strategic partner. Brussels officials believe that by trading and working with China, not only can they lean on Beijing to reform their human rights and energy policies, but also use a good relationship with China to act as a buffer between Beijing and Washington, thus giving the EU a clear and important geopolitical role.”

It cannot be lost on France and Germany that when it comes to the Indo-Pacific, Washington is willing to spend more political capital and invest in security and defence ties with the UK and Australia before reaching out to EU powers.

Coming on top of the developments in Afghanistan, where President Biden did not even consult the European allies on his April decision to withdraw troops, the AUKUS announcement can only solidify France’s view that the EU needs the capacity to defend its interests in the Indo-Pacific.

Equally, the AUKUS highlights that the US’ position toward Australia within the QUAD is very different from that toward Japan and India.

By the way, the senior administration in Washington who briefed the media on September 15 was asked whether there is scope in future for the US to extend such cooperation to other countries. He replied:

“I do want to underscore: We see this as a very rare engagement between Australia, Great Britain, and the United States. We’ve done this only once before…  That was almost 70 years ago with Great Britain… This technology is extremely sensitive.  This is, frankly, an exception to our policy in many respects.  I do not anticipate that this will be undertaken in other circumstances going forward.  We view this as a one-off.”

Of course, neither Japan nor India hold such compelling geopolitical relevance for Washington as Australia, which is the hub of America’s Indo-Pacific strategy — with Indian Ocean to its west and Pacific Ocean to its east. Thus, it is equipping Australia with a fleet of nuclear-powered submarines of cutting edge technology to patrol the Indian Ocean as well as the Pacific Ocean.

Although Washington and Delhi may have common interests, they have significant differences as well. India will not completely turn to the US side like Australia. Washington and New Delhi have different political needs in the medium and long term. India would have its ambitions, too.

AUKUS is bound to be studied carefully in Tokyo and Delhi  and it will affect their strategic choices. Much is still in the dark still about this “enhanced trilateral security partnership” between three “maritime democracies.” Will there be a governing treaty?

No doubt, the US will aim at building a more solid and broad foundation for its Indo-Pacific Strategy with the AUKUS and the Quad complementing each other. However, within the QUAD framework, Australia stands out now as “more equal” than Japan and India in terms of US willingness to share super sensitive core technologies. Japan and India need to assimilate the “psychological blow”.

External Affairs Minister S. Jaishankar has made a phone call to his French counterpart. Jaishankar later tweeted, “Discussed recent developments in the Indo-Pacific and Afghanistan with my friend FM @JY_LeDrian._Looking forward to our New York meeting.”

It would seem that the British industrial dimension in the submarine project determined the AUKUS partnership. Curiously, Dominic Rabb who as British foreign secretary during the G7 summit had voiced reservations about AUKUS annoying China and France, has since been summarily moved out of the Foreign Office and appointed justice secretary!

PM Boris Johnson in his remarks on September 15 regarding AUKUS twice highlighted for the benefit of the domestic audience that business interests are involved. As he put it, “the other opportunities from AUKUS [will be] creating hundreds of highly skilled jobs across the United Kingdom, including in Scotland, the north of England, and the Midlands, taking forward this government’s driving purpose of levelling up across the whole country.”

“We will have a new opportunity to reinforce Britain’s place at the leading edge of science and technology, strengthening our national expertise… Now, the UK will embark on this project alongside our allies, making the world safer and generating jobs across our United Kingdom.”

However, Australia’s capacity to operate these horribly expensive and powerful defence asset will always be subject to US veto, which means that the whole program will lead inevitably to deeper operational integration with the US. No doubt, Australia is ceding a high degree of its sovereignty.

Put differently, AUKUS is a big Australian bet on the US policies. What if in three years’ time, someone like Donald Trump enters the White House? This is one thing.

He said, “In the escalating rivalry between America and China, we’re siding with the United States and we’re betting they are going to win this one. But the fact is that when we look 10 or 20 years ahead, I don’t think we can assume the United States is going to succeed in pushing back effectively against China.”