Oct 25, 2014–The following is a talk on the war situation in eastern Ukraine that was delivered in Vancouver, Canada on October 25, 2014 by Roger Annis. He was one of the international delegates who attended the antiwar conference in Yalta, Crimea on July 6, 7, 2014. His talk on Oct. 25 was part of the program that day of the annual World Peace Forum Society, held at Simon Fraser University.

Roger Annis is an editor of the new website, ‘The New Cold War: Ukraine and beyond’. He has written extensively on Ukraine since the overthrow of the government there in late February 2014. His writings have focused on the antiwar, anti-fascist and anti-austerity aspirations of the Ukrainian people.

This video was filmed by Devin Gillan on behalf of the World Peace Forum Society of Vancouver BC. 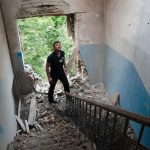 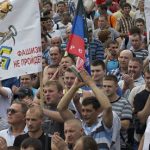