Robert Parry’s legacy and the future of Consortium News 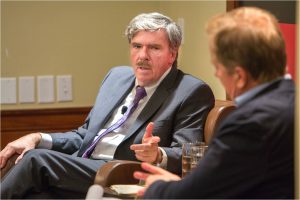 Robert Parry at ceremony awarding him the I.F. Stone Medal for Journalistic Independence, in October 2015

Robert Parry, editor and publisher of Consortiumnews.com, died peacefully on the evening of Saturday, January 27, 2018. In this tribute, his son Nat Parry describes Robert’s unwavering commitment to independent journalism. Read the tribute to Robert Parry at the original weblink above.

The editors of New Cold War.org are very saddened to hear of Robert Parry’s passing. He was a champion of democracy and of the right of the peoples of the world to receive truth, not lies, from their governments. Our website was fortunate to be able to draw our readers’ attention to his valuable writing.

We salute Robert Parry’s lifetime of work and we commit to honoring and making known his legacy.

*  Remembering investigative journalist Robert Parry, by Norman Solomon, The Nation, Jan 30, 2018  What made Bob Parry a trailblazer for independent journalism also made him a bridge burner with the media establishment.
*  Robert Parry receives I.F. Stone Medal for Journalistic Independence, report published by the Nieman Foundation, Oct 22, 2015  (with video of Robert Parry’s acceptance of the award, 11 minutes)
*   Excerpt from a tribute to Robert Parry published on RT.com:

… Parry was born in 1949 in Connecticut and worked for the Associated Press, PBS and Newsweek. He won a George Polk Award in 1984 for his stories on how the CIA helped the so-called contras, right-wing rebels who were fighting the socialist government in Nicaragua. The journalist later revealed the involvement of National Security Council officer Oliver North in a clandestine operation to support the same contras with revenues from secret arms sales to Iran.

By 1995, Parry became disillusioned with the mainstream media and established the Consortium for Independent Journalism.

“The people who succeeded and did well” in the popular press, he told media watchdog group Fairness & Accuracy in Reporting in 1993, “were those who didn’t stand up, who didn’t write the big stories, who looked the other way when history was happening in front of them and went along either consciously or just by cowardice with the deception of the American people.”