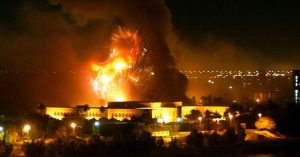 Robert Parry has published a new analysis (dated September 10) in Consortium News of the chemical weapons accusations that continue to be leveled against the Syrian government. He draws a parallel to the earlier propaganda war to sell the 2003 war against Iraq to a skeptical public. \

Below is the weblink to Parry’s new article as well as the text of the first several paragraphs. There is an extensive reader comments section of the article. Below that is a weblink to the latest article by the always-excellent Consortium News writer Daniel Lazare. The article is titled ‘The dangerous decline of U.S. hegemony’. The article promo reads:

The bigger picture behind Official Washington’s hysteria over Russia, Syria and North Korea is the image of a decaying but dangerous American hegemon resisting the start of a new multipolar order, explains Daniel Lazare.

Lazare is the author of the excellent 2014 essay ‘Timothy Snyder’s lies‘. The essay reviews the widely hailed book by Timothy Snyder, Bloodlands, which purports to be a history of 1930’s eastern Europe.

Bloodlands is part of the rising, revisionist history school of ‘equivalency’ arguing that the government of the Soviet Union under Joseph Stalin is equally guilty of human rights crimes as the fascist regime of Nazi Germany. German Nazism killed more that six million Jews in the Holocaust , and it killed more than 20 million Russia, Ukrainian and other Soviet people during World War Two. The ‘equivalency’ school argues that lots of people died, too,  during the Soviet regime led by Joseph Stalin. Furthermore, the Soviet Union was equally, if not more, responsible than the Nazis themselves for the rise of German Nazism! You have to read Daniel Lazare’s critique of Snyder’s book to believe that this is really being argued.

For those who value the journalism of Consortium News, it has just launched its early fall fund drive. The goal is $35,000. A modest goal with large benefits to readers.

The New York Times and other Western media have learned few lessons from the Iraq War, including how the combination of a demonized foreign leader and well-funded “activists” committed to flooding the process with fake data can lead to dangerously false conclusions that perpetuate war.

At the start of the U.S. invasion of Iraq in 2003, President George W. Bush ordered the U.S. military to conduct a devastating aerial assault on Baghdad, known as “shock and awe.” What we have seen in Syria over the past six years parallels what occurred in Iraq in the run-up to the U.S.-led invasion in 2002-03. In both cases, there was evidence that the “system” was being gamed – by the Iraqi National Congress (INC) in pushing for the Iraq War and by pro-rebel “activists” promoting “regime change” in Syria – but those warnings were ignored. Instead, the flood of propagandistic claims overwhelmed what little skepticism there was in the West…

The bigger picture behind Official Washington’s hysteria over Russia, Syria and North Korea is the image of a decaying but dangerous American hegemon resisting the start of a new multipolar order, explains Daniel Lazare. 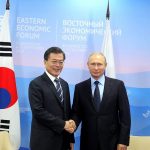 Press statements by Vladimir Putin and President of the Republic of Korea Moon Jae-in following talks in Vladisvostok, Russia on Sept 6, 2017Multipolarity, Russia 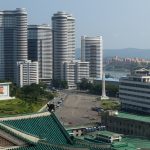