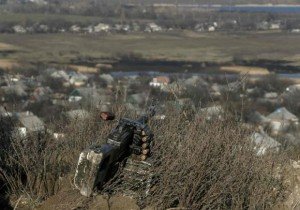 The financial toll of fighting pro-Russian separatists has shrunk currency reserves to their lowest in a decade and weakened the hryvnia currency over 60 percent since the start of 2014, forcing Kiev to ask for additional international funding to stave of bankruptcy.

In a report by IMF staff released after the fund announced a new, longer-term $17.5 billion (11.78 billion pounds) loan package, the IMF said the programme it was backing and Ukraine’s journey back to economic health are most vulnerable to being derailed by renewed conflict in eastern Ukraine.

Violence has lessened significantly in recent weeks as a new ceasefire deal shows signs of holding, but many fear a fresh offensive could be launched in the spring.

The fund’s report also highlighted the risk that creditors holding Ukrainian bonds may balk at the terms being offered in restructuring talks, which Finance Minister Natalia Yaresko said had not been settled in advance.

“I want to listen to our creditors, I want to hear their perspective how they see the situation,” Yaresko said in a conference call. “I don’t have a product to offer today, I don’t have a vision of where we will end up after those consultations and negotiations.”

The overall international financing package amounts to more than $40 billion. That includes the $17.5 billion of IMF loans, a further $7.5 billion in lending from other international organisations and $15.3 billion in debt relief that Ukrainian officials hope to gain from bondholders.

Debt-restructuring talks with holders of its sovereign debt, who include top fund managers Franklin Templeton, Blackrock and PIMCO, are due to begin on Friday.

“I’m an optimist and I think we will find a solution with our creditors … (but) of course it is a very complicated process,” Yaresko said at a briefing in Kiev. She said he hoped a deal would be reached within two months.

“Creditors may balk at the terms being offered in the debt operation and holdouts may try to free ride,” the IMF report said. “The negotiations may be protracted, particularly as some creditors have large positions in specific bond issues.”

Questions remain over whether Russia, which holds $3 billion of Ukraine bonds maturing in December, will participate in the restructuring.

Speaking to press on Thursday, IMF official Than Arianist said that all Ukraine’s sovereign dollar bonds are potentially eligible in the restructuring.

Yaresko confirmed Ukraine would treat all creditors alike. “We will not discriminate on nationality or on location or on any other criteria,” she said.

Ukraine sovereign dollar bond prices fell across the curve, and the cost of insuring exposure to Ukrainian debt jumped on Thursday ahead of Friday’s talks.

The IMF also noted that reforms — which hinge on strengthening public finances, repairing bank balance sheets, shaking up the energy sector and running a tight monetary policy to stabilise its currency — could be blocked by “vested interests”.

“Ukraine’s track record on program implementation is weak and punctuated by repeated false starts,” the fund said in its assessment of the reform package.

“In fact, in key policy areas such as the exchange rate regime, energy sector, anti-corruption, and agricultural VAT, progress was stalled in the past under pressure from vested interests.”

The IMF conceded, however, that Ukrainian authorities made progress in addressing these issues in connection with an earlier loan agreement approved last year. That loan is now deemed insufficient in light of Ukraine’s ongoing conflict with pro-Russia separatists in the east.

The fund noted that the reform package, if successful, could leave Ukraine with a more robust long-term outlook because the current crisis presents the country with a unique opportunity to push through tough policies.

Ukrainian authorities proposed to the IMF a structural turnaround that will involve some belt tightening for their citizens, such as spending cuts and an energy-sector shake-up that will involve increases to household gas prices.

Monetary tightening aimed at stabilising the currency and replenishing foreign currency reserves would be helped by the IMF’s intention to front-load its rescue package, pumping $10 billion into the economy in the first half year, the fund said.

Governance of the central bank will be bolstered in consultation with IMF staff. Banking sector supervision will also be tightened alongside anti-corruption measures and deregulation to lure back investors.

In a letter of intent to the IMF, Kiev said if market conditions deteriorate the central bank would ramp up capital controls it tightened in February to stabilise the hryvnia, which had slumped 50 percent to record lows of over 30 to the dollar on signs the peace deal with rebels could crumble.

The official rate stood at 21.55 on Thursday, little-changed from a day earlier. 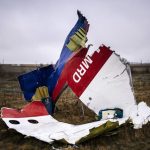 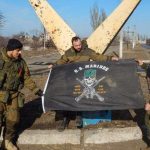 U.S. in Ukraine: Watch what they do, not what they sayBackground, Greg Butterfield, Ukraine