The following is veteran journalist Joe Lauria’s first dispatch to The Duran, which was founded in April 2016 and publishes out of London.

More than two weeks after Turkey’s dramatic failed coup, what exactly happened remains shrouded in mystery, leaving only speculation that has hardened into “fact” in the absence of convincing evidence.

Two main theories have emerged: The first is that this was yet another in a long line of CIA-backed coups. The other is that Turkish President Recep Tayyip Erdogan either staged or let the coup happen to give him the opportunity to consolidate his rule through a vicious and ongoing purge of his perceived enemies.

The first theory has now passed into the realm of “fact” because some commentators unquestioningly accept that the CIA tried to remove Erdogan for suddenly seeking to repair relations with Russia, Iran and Syrian President Bashar al-Assad. Assad is a man Erdogan has squandered substantial political capital trying to overthrow for five years.

This theory asserts the failed coup was a “victory against the U.S. empire” because Erdogan has defied Washington by suddenly moving Turkey into the multipolar camp with a view towards Eurasian union, rather than the European Union.

“Suddenly” is the key word. What led to Erdogan’s apparent about-face? His Syria policy of supporting ISIS and opposing Damascus, Moscow and Teheran completely blew up in his face. He failed to overthrow Assad. Turkey’s downing of a Russian warplane damaged Turkey’s economy. ISIS turned on him, attacking Ataturk Airport. He was on the ropes. Erdogan is a supreme survivor. He’ll switch enemies and friends on a dime if need be. He’s proven no loyalty but to himself.

For the moment, Erdogan’s shift instead appears to be a short-term, tactical, move, to ensure his survival. Time will tell whether it is also strategic. It’s too early to declare he’s turned his back on the U.S., NATO and the EU and joined the multipolar world. I doubt Moscow, Tehran and Damascus fully trust Erdogan’s overtures as a long-term commitment, willing as they are to feel him out.

The Turkish government, though not Erdogan himself, has blamed the U.S. for the coup. A hardline conservative newspaper that backs Erdogan, Yeni Şafak, has even named U.S. General John F. Campbell as “one of the top figures who organized and managed the soldiers behind the failed coup attempt,” citing “sources close to ongoing legal process” against those arrested for the coup. It said Campbell “managed’ more than $2 billion to pay for the coup through CIA links with UBA Bank in Nigeria.

Without named sources or documentary evidence, which covert operations by their nature rarely yield, it’s easy to blame the CIA. In this case, the speculation rests on two assumptions, the first is the supposed U.S. reaction to Erdogan’s pivot East. But as Phil Giraldi, a former CIA agent stationed in Turkey, has pointed out, the coup plotters and other Erdogan opponents hated his Syria policy and would welcome his rapprochement with Assad and a move East.

The coup’s motive may have, instead, been to stop Erdogan, who sees a Sultan in the mirror, from continuing his march to one-man rule. The coup leaders called themselves the Peace Council, claiming they wanted to restore democracy and overthrow a tyrant who is ruling unconstitutionally. (Erdogan is already ruling as though Turkey has changed to a presidential system, though the referendum he wants hasn’t yet been held.)

The second assumption is that Erdogan’s arch-enemy, the Pennsylvania-based imam Fethullah Gülen who Erdogan blames for masterminding the coup, is a CIA asset running a “terrorist” organization. Erdogan calls anyone who disagrees with him a “terrorist”: academics, journalists, Kurdish members of the Turkish parliament. I’m surprised he hasn’t called Pope Francis a terrorist for calling Armenia a genocide.

The only evidence offered connecting Gülen with the CIA is a letter written by Graham Fuller, a former CIA agent once posted in Turkey, in support of Gülen’s 2006 U.S. green card application. Fuller himself has condemned the coup and his blog is often highly critical of U.S. Middle East policy.

Gülen communicates daily to his followers around the world in sermons viewed over the internet. These as well as his other communications must be monitored by the Turkish government. Evidence that would stand up in a U.S. court of Gülen ordering the coup is what Washington would need in Erdogan’s frantic extradition request for Gülen. The quality of that evidence could determine whether Gülen was behind the coup. Of course, if you already believe the CIA did it, you won’t believe what a U.S. court says.

Even without proof, it can’t be ruled out that military men inspired by Gülen may have been involved (with secular Kemalists). But Gülenists have been more numerous in the police than the military.

I was the first American reporter to interview Gülen, when I visited him in his Pennsylvania compound in 2010. I’ve studied the group the past six years, getting to know dozens of his followers, visiting schools in the U.S, Turkey and elsewhere. In my research, I have been on the inside living with his followers while teaching English at one of the schools. Religion is not taught. It is not in the curriculum. The idea that these are jihadist madrases, or that Gülenists are extremists or terrorists is beyond absurd, as anyone who knows them will attest. One such person is John Esposito of Georgetown University, one of America’s leading experts on Islam. In this video interview, Esposito calls Gülen’s a “pluralistic” movement “unique” to Islam.

Though I disagree with Gülen on certain things, notably his lack of criticism of Israeli treatment of Palestinians, it is ludicrous to accept Erdogan’s branding of his followers as terrorists. The Gülenists have no political party. It is a social movement that does, however, seek to influence Turkey’s political direction. They were almost certainly behind the leaked audio of Erdogan telephone calls exposing his corruption in a real estate deal. The New York Times reported that my interview with Gülen, in which he took Israel’s side in the Mavi Marmara incident, led to the first open breech in the uneasy alliance between Gülen and Erdogan. The leaked telephone calls were the last straw. Erdogan fired and arrested policemen and judges who dared investigate the corruption allegations.

In response to the coup attempt, Erdogan has shut down every Gülen-affiliated institution in Turkey by decree, including thousands of schools, foundations and charities. He finished the job of shutting down all of its media properties.

“A Gift From God”

In all, 60,000 people in the military, civil service, judiciary and academia, who couldn’t possibly have all been involved with the coup, have either lost their jobs or been arrested in Erdogan’s ruthless retaliation. Amnesty International says some have been tortured. Worse for the coup plotters, their gambit has fortified his mounting absolute rule, which brings us to the other theory: that Erdogan either staged or allowed the coup to happen. Gülen himself alleges it was staged. His followers name an Erdogan-loyal general, Mehmet Disli, who they claim gave the order to start the coup.

Because Erdogan knew of the coup hours before, there is a stronger possibility that he let it happen to smoke out disloyal officers, confident his handpicked brass would crush it. They may have played along with the coup and then double-crossed the coup leaders once it was underway. It would be a seriously amateurish attempt to go ahead without the consent of the top military leadership.

Erdogan seized the chance the coup afforded him, which he himself called “a gift from God,” to solidify his rule over Turkey like a Gulf monarch, while accruing international support and even sympathy.

At this point, we need to step back a moment and look at Erdogan’s slow rise to power and how he took control of a hostile, secular military. Erdogan deceived plenty of people in Turkey, but especially in the West. He was seen as the leader of a model Islamic democracy who would put the military under civilian control.

Erdogan’s AKP party is essentially part of the Muslim Brotherhood. Mohammad Morsi named his Egyptian Muslim Brotherhood party after Erdogan’s—The Justice and Development Party. The Brotherhood’s strategy is to gain power through elections and then gradually implement an Islamist agenda, as opposed to attempting to seize power violently like al-Qaeda or the Islamic State—like the Mensheviks, rather than the Bolsheviks.

I took part with a small group of reporters interviewing Erdogan at the United Nations in New York in 2009. At the time, his strategy of getting the Turkish military out of politics, in which they had intervened in four coups, seemed convincing. He sought to root out the Ergenekon underground network of organized crime, military and intelligence officers in the Turkish Deep State in a move that appeared to be in favor of civilian-led democracy.

But as the Turkish opposition leader, Kemal Kilicdaroglu, of the People’s Republican Party (CHP) told me in a one-on-one interview in Washington in 2014, Erdogan arrested the wrong people supposedly involved in the Ergenekon conspiracy. Many innocent people were falsely charged at a time the Gülenists supported the move to get the military out of politics.

In fact, Erdogan was cleverly replacing the brass with his own military men and seized control of the Deep State. His actions, especially after the failed coup, show that democracy has not been his motive.

Would the CIA have organized a coup without the support of the top brass? Would the CIA have moved so quickly on what might just be a short-term tactical shift by Erdogan? Were Gülenists involved in the coup or was it Erdogan’s version of the Reichstag fire? These are questions that may never be answered leaving us mired in speculation—a poor substitute for the facts.

Joe Lauria is a freelance journalist who has been published extensively in some the top media outlets over the past 25 years. 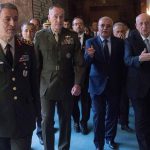 In an effort to maintain U.S. ties, Turkey softens its toneTurkey / Türkiye 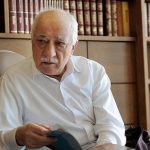