Not a single civilian has been able to flee militant-held East Aleppo as the third day of a humanitarian ceasefire initiated by Moscow and Damascus came to an end, RT’s correspondent on the ground reports. Terrorists also bombed the humanitarian corridor. 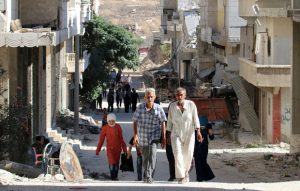 “There were ambulances, buses waiting for civilians, waiting for the sick, nobody was allowed to leave,” RT’s Murad Gazdiev, who is currently in Aleppo, reported on Saturday.

Instead, “rebels and Jihadists” shelled the crossings designated to allow free passage to those willing to exit the encircled part of Aleppo.

On October 18, Moscow and Damascus halted their anti-terrorist strikes on East Aleppo. Starting from October 20, a humanitarian ceasefire saw an opening of four corridors for civilians and two for militants to offer a safe way out. The UN and other aid groups were supposed to bring humanitarian aid through the respective corridors as well. On Thursday, militants opened fire on one of the routes, injuring three Russian officers at the El-Masharka government checkpoint, Moscow said. 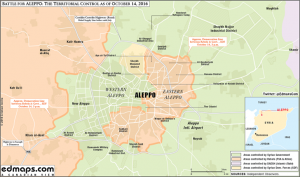 The evacuation of civilians was “impossible” due to the poor security situation on the ground, Ingy Sedky, spokeswoman for the International Committee of the Red Cross (ICRC), was quoted as saying by Deutsche Welle.

Russian Foreign Minister Sergey Lavrov earlier put the blame for the misery on former Al-Qaeda affiliate the Al-Nusra Front and allied militants. Their fighters “explicitly shell those routes through which such humanitarian aid can be delivered,” Lavrov said Friday.

Lavrov’s statement is supported by Gazdiev’s reports from the frontlines in Aleppo, where an RT crew witnessed the black banners of Al-Qaeda. “Today we actually got very close to the frontline, we had actually a direct line of sight of East Aleppo. And we saw again the black flags of Al-Qaeda waving over the city,” Gazdiev said. In early October, the UN special envoy for Syria, Staffan de Mistura, estimated that some 900 fighters for the Al-Nusra Front – designated a terrorist group by the UN – are standing their ground in East Aleppo alongside other militants.

On Saturday, Al-Nusra Front terrorists executed a local imam in East Aleppo after he tried to persuade militants to leave the district, RIA Novosti reports, citing local Syrian militia. The news agency adds that on Thursday, jihadists also killed 14 civilians in the Bustan al Qasr district for trying to use one of the humanitarian corridors.

The RT crew managed to speak to people in the government-held part of Aleppo who have relatives in the militant-held districts. A woman, whose three children are living with their grandmother in East Aleppo, said that “they are doing very badly.”

“They do not have food or drink – nothing,” she said.

“It’s bad, it’s very bad. They [militants] take their food, their money, beat them and do whatever they want,” another woman told RT.

On Friday, the UN Human Rights Council voted to start an independent inquiry into alleged human rights abuses in Aleppo. “Armed opposition groups continue to fire mortars and other projectiles into civilian neighborhoods of western Aleppo,” a statement by the Office for the UN Commissioner for Human Rights said. However, the body has put most of the responsibility for the civilian casualties on Damascus and its allies, of which Moscow is a key one.

On Saturday, the spokeswoman for the Russian Foreign Ministry, Maria Zakharova, lambasted the move, issuing a statement on her Facebook page, calling the accusations “cynical” and “dishonorable.”

“The worst thing is that the very countries that hysterically cried foul over the humanitarian situation in Aleppo, they know (do not assume, but rather know) that the delivery of humanitarian assistance to the civilian population of the city is blocked by militants, [to whom] they in turn regularly provided assistance,” Zakharova said.

Readers of the above RT article can read, by comparison, an article in The Guardian on October 23 reporting that military conflict has resumed in the eastern districts of Aleppo. The Guardian obscures the facts  of why the three-day humanitarian pause declared by the Syrian and Russian governments failed and why no civilians succeeded in escaping from east Alepppo, which is controlled by right-wing extremists.

Here are the two key paragraphs in The Guardian article:

Neither residents nor rebels of opposition-held districts heeded calls from Syria’s army and Moscow to leave during the ceasefire, after weeks of devastating bombardment and a three-month government siege.

Syrian state media and Russian authorities have accused rebel forces of preventing civilians from leaving and using them as human shields.

Does The Guardian investigate the accusation that right-wing forces prevented civilians and others from leaving east Aleppo and are using them as human shields? No it doesn’t, and the reason is clear–authentic journalism would get in the way of the (intensifying) Western propaganda narrative of “moderate rebels” in eastern Aleppo and elsewhere in Syria waging a heroic struggle against an evil Syrian government and evil Russia.

Here is another example of the Western media propaganda in action, from the Wall St. Journal on Oct 23:

Russia implemented the cease-fire along with Syrian armed forces loyal to President Bashar al-Assad to allow the entry of humanitarian aid into the city.

Moscow billed the move as an opening for residents and rebels to leave opposition-controlled neighborhoods. But no aid arrived and rebel factions vowed to remain and continue fighting.

Jens Laerke, spokesman for the United Nations Office for the Coordination of Humanitarian Affairs, said assistance couldn’t be delivered because of security conditions. Russia’s Defense Ministry didn’t respond to requests for comment…

And here is an excerpt from a short report in Reuters on Oct 23:

Russia had declared a unilateral ceasefire from Thursday which was rejected by rebels, lasted three days and did not result in hoped-for medical evacuations from the city or aid deliveries.

Air strikes within the city stopped for three days, but resumed late on Saturday as the third day of the truce expired…

Readers looking for accurate news of the U.S. led attack underway on the city of Mosul in northern Iraq will want to carefully select their reading sources if they want an accurate picture of what it all means. One of the consequences of the U.S.-led attack on Mosul, planned or otherwise, will be the exit of extremist (ISIS) forces into Syria.

And don’t look to Western media for reports on this air strike by the “U.S.-led coalition” on October 21 that killed 15 Iraqi women at a funeral procession in the city of Daquq, south of Kirkuk. Uncomfortable truths have a way of disappearing amidst the ‘fog of war’. Here is the New York Times report on the attack, two paragraphs buried in a larger story dated Oct 22:

As the assault [by ISIS] on Kirkuk was underway, an airstrike hit a funeral procession in the town of Daquq to the south, killing 17 people, mainly women and children, and wounding another 50, said Daquq Mayor Amir Khodakram. He said it was not clear who carried out the airstrike and that officials have launched an investigation.

The Russian Defense Ministry blamed the strike on the U.S.-led coalition, saying it had “all the signs of a war crime.” The U.S. military in Baghdad did not immediately respond to a request for comment.

Three people have been killed, including a seven-year-old girl, and 28 more injured after militants shelled residential areas of government-held West Aleppo, reports RT correspondent Murad Gazdiev, who is there and has spoken to those injured…