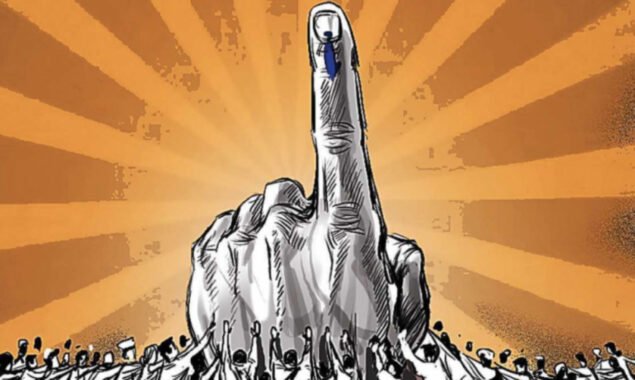 The upcoming elections in three Indian states will be a contest between the BJP’s polarizing, violent, Islamaphobic messages and efforts to create a more plural, more democratic India

A bizarre event took place in northern India between December 17 and December 19, 2021. It was a “religious parliament” (Dharma Sansad) with the theme, “The Future of the Sanatan Dharma in Islamic India: Problem and Solutions.” The event took place in Haridwar, a city in the Indian state of Uttarakhand. The speakers—each of them dressed in saffron robes, which are usually worn by Hindu monks—took to the stage during the Dharma Sansad and spoke in a startlingly dangerous and provocative fashion. Sadhvi Annapurna, the general secretary of the Hindu Mahasabha, a right-wing Hindu nationalist outfit in India, was the most forthright in spelling out the agenda of hatred against the Muslim community that marked the tone for this event. “Nothing is possible without weapons,” she said. “If you want to eliminate their [the Muslim] population, then we are ready to kill them.”

The reference to “their” and “them” in her speech was clear to everyone in the room and anyone who watched her clip, which circulated widely on social media and on television channels in India. Sadhvi Annapurna was referring to the 204 million Muslims of India. “Even if 100 of us are ready to kill 20 lakh [2 million] of them, then we will be victorious and are ready to go to jail,” she said.

Despite calls by some sections of society, including a group of retired government officials, to investigate and arrest the organizers and speakers of the Dharma Sansad for making these provocative hate speeches, the police in the state of Uttarakhand did not take any “serious action” against those who tried to incite violence through this event, stated government officials in a letter they sent to Uttarakhand’s Chief Minister Pushkar Singh Dhami “condemning his government’s response” to the Dharma Sansad. Uttarakhand is governed by the Bharatiya Janata Party (BJP), whose leader Narendra Modi is the prime minister of India.

Meanwhile, Dhami did not make any statements against the event, although photographs of him bowing before one of the speakers at the conclave appeared to suggest a close association with the people involved in organizing the event. That speaker in the photograph, Swami Prabodhananda Giri, the head of the Hindu Raksha Sena, a right-wing organization based out of Uttarakhand, said at the gathering, “Every Hindu must pick up weapons, and we will have to conduct this cleanliness drive.” It is clear that the association of “weapons” with “cleanliness” refers to the kind of ethnic or religious cleansing witnessed during various periods in history, including the Holocaust during World War II.

Between February and March 2022, three key north India states are expected to go to the polls; among these states is Uttarakhand. The other two states—Uttar Pradesh and Punjab—are key to the fortunes of the ruling BJP, which will see its popularity tested after Modi had to withdraw three farm bills on November 19, 2021. Farmer unrest in both Punjab and Uttar Pradesh led to a year-long protest campaign that soured the reputation of the BJP in these two states and has created the possibility of new electoral maps being drawn in both these states in India. Uttar Pradesh (which has a population of approximately 200 million) is India’s most populous state, and the fortunes of the BJP there will determine the authority of Modi’s government in Delhi, India’s capital and the central government’s seat of power. A defeat in Uttar Pradesh, or even a reduced majority, would give the opposition greater confidence to challenge Modi’s fiat approach to policymaking and to counter the right-wing ideology propagated by the BJP.

Currently, the BJP dominates the state assembly in Uttar Pradesh (it won 312 out of the 403 seats in the assembly elections of 2017). The atmosphere in Uttar Pradesh remains tense for minorities (around 19 percent of the population in the state are Muslims), largely because various Hindu right-wing organizations—such as those represented at the religious conclave—have stoked the fires of hatred against the Muslim minority for generations. As part of its vote-gathering arsenal, the BJP has developed a strategy to provoke religious violence, polarize the population, and ensure that the majority Hindu vote gathers under its banner. This is what the BJP did to succeed in the 2014 general elections, before which local party officials engineered a pogrom in the town of Muzaffarnagar in August to September 2013 that resulted in the death of more than 60 people and left thousands of others displaced. In the aftermath of that violence, BJP leader—and now home minister of India (responsible for law and order in the country)—Amit Shah in 2014 told a crowd in Shamli in western Uttar Pradesh that the general election, which eventually led to the BJP seizing power in India, was about honor, and was “an election to take revenge for the insult” and “to teach a lesson to those who have committed injustice.”

In November 2021, the Samajwadi Party and the Rashtriya Lok Dal (National People’s Party) formed an alliance for the Uttar Pradesh legislative elections. The Samajwadi Party had governed the state from 2012 to 2017 under the leadership of former Chief Minister Akhilesh Yadav. The Rashtriya Lok Dal, meanwhile, brings heft in the western districts of Uttar Pradesh, where the farmers’ agitation had the greatest impact. This combination threatens the BJP’s divisive agenda. It is likely that more events like the Dharma Sansad focused on spreading and strengthening religious hate in Uttar Pradesh will be on offer to polarize the electorate to the benefit of the BJP.

The religious conclave held in December 2021 suggested that there was a threat to Hindus in “Islamic India.” This is a theme that goes back to the 19th century, when leaders of the Hindu right wing began to say that Hinduism was being threatened by, among other things, the rising birth rate of Muslims. Facts apart, this idea festered in the sewers of right-wing thought continues to find favor in the currents within the BJP, such as Shah, who had described the minority Muslim population of Uttar Pradesh as the people “who have committed injustice.” To refer to India as “Islamic” is part of the exaggerated paranoia, a festivity of hatred that results in violence and in the consolidation of political power for the BJP.

Rather than face arrest for their hate speech, the men and women who spoke at the assembly filed a complaint with the police against “maulanas or clerics” and “the Quran, maulvis [Islamic scholars] of Haridwar and other unnamed Muslims.” Sadhvi Annapurna, who had called for the murder of Muslims, is heard in a video posted on Twitter on December 28, 2021, telling a police officer to “show us that you are not biased.” Yati Narsinghanand, who organized the religious conclave, interjects to say that the police officer is “biased and on our side.” Following the religious conclave in Haridwar, 21 “Hindu monks” who participated in the conclave formed a committee to hold more of these meetings and to “convert India into a ‘Hindu Rashtra’ [state].” “You [the Hindus in India] can fight them only with arms,” the monks said, with no need to elaborate on whom they meant during their reference to “them.”

Democracy in India is wounded by the acidic legacy of the Hindu right wing, which thrives on intimidation and false pride as the fuel for its success. The farmers’ agitation offered an alternative path. The two roads will be tested in these legislative elections expected to take place in early 2022.