There is no rest for the innocent and murdered writer and historian Oles Buzina in his homeland gone crazy. In Kyiv today, as another proof of the “absence” of fascism in Ukraine, a plaque placed in honor of the writer on the wall of his house was vandalized and removed. 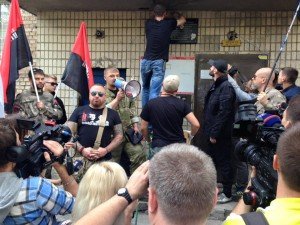 Goons of the ‘Right Sector’ vandalize memorial plaque to Oles Buzina in Kyiv on Aug 26, 2015 (photo on Antifashist.ru)

The blasphemy did not stop there. In place of the memorial plaque to Oles Buzina, the vandals placed a plaque in honor of his murderers. They wore t-shirts honouring his two accused murderers, presently in detention, and they broadcast their vandalism live on YouTube.

The action was doubly a cynical farce when it became clear that the vandals were so-called activists of the infamous organization ‘Right Sector’, to which the accused killers belong.

The vandalism was recorded by Ukrainian TV channels. No one raised the obvious objection: ‘What are you doing, bastards?’ After all, even if we assume that the assassins were “appointed”, this is no excuse for a new outrage over the memory of the murdered writer. Moreover, it all took place at the scene of the murder, at the house where he lived his entire life. There are enough other places for protests in Kyiv.

We have no confidence in the Ukrainian games of crooked justice, especially in these times. But expressing no confidence in it cannot be a license to scoffing at the memory of the dead who cannot answer.

This action, apparently, was not so much an attempt of the neo-Nazis to stand up for their friends, the murderers, as it was to perpetrate a new outrage against a bright and gifted opponent. In comparison to him, the adherents of so-called Ukrainian national patriotism look gloomy. They try to intimidate those who sympathize with Buzina or share his ideas, those of a true patriot.

The cynical abuse has not gone unnoticed in Russia. Prominent political scientist and social activist Sergei Markov called the act of the neo-Nazi vandals an “apotheosis of impudence”.

“It’s the apotheosis of impudence: at the place of the murder of Oles Buzina, our friend and a most brilliant historian of modern Ukraine, a memorial plaque to his murderers was placed. This was done by the companions of the killers, fighters of the neo-Nazi Right Sector. It is the second memorial plaque in honor of slain historian to be destroyed.

“This is vivid evidence of the moral degradation of the Ukrainian society.”

Unfortunately, people in Western countries will not get information about all this because European and American TV channels de facto censor the crimes of the Kyiv junta, Markvo explained on social media.

“This is all for geopolitical reasons. The junta is aiding the killing of those who are for close ties between Ukraine with Russia.”