Unbeknownst to consumers of mainstream Western media, trials in Ukraine are ongoing against officers of the former ‘Berkut’ police force who were on duty in Maidan Square, Kyiv at the height of the violent protest movement that overthrew the elected President Victor Yanukovych on February 22, 2014. 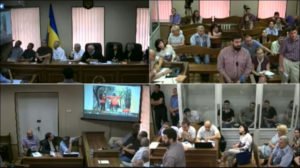 Live streaming on Aug 4, 2016 of ‘Maidan Massacre’ trial in Kyiv

Trial proceedings are filmed and broadcast (in Ukrainian language), but Western media is loathe to cover and report on proceedings. That’s because trial testimony is countering the centrepiece of the Western propaganda construct of the overthrow of Ukrainian President Victor Yanukovych in February 2014, namely the killings by sniper fire of dozens of protesters on Maidan Square on February 20, 2014.

Western governments and media have claimed all along that the killings were the work of the Berkut special police under orders of the Yanukovych government to suppress the protests. But as revealed at the trial and brought to light in the English language by the ongoing writing of Ottawa researcher Ivan Katchanovski, it turns out that most if not all of the sniper killings were perpetrated by paramilitaries of the extreme, right-wing forces on Maidan Square.

Katchanovski is reporting the revelations at the ‘Maidan Massacre’ trials on his Facebook page and in occasional academic papers analyzing the whole snipers episode. Enclosed is his report of August 5, 2016 on Facebook, reporting on trial revelations the day before.

An on-site, forensic ballistic investigation which was conducted by a ballistics expert on a GPU [Prosecutor General of Ukraine] request and made public during the Maidan massacre trial on August 4, 2016 confirmed my APSA paper [research paper presented to American Political Science Association in September 2015] finding that a Maidan medic was wounded from a Maidan-controlled location on February 20, 2014 and not from the Berkut  positions. The moment of his wounding was filmed by CNN from the Hotel Ukraina and used by the media in the West and in Ukraine as evidence that the government forces deliberately targeted even medics. My analysis found that the medics were shot by Maidan “snipers” as a part of a false flag operation.

The on-site forensic ballistic investigation concluded that Roman Kotliarevsky was shot from a sector ranging from the Hotel Ukraina to the Bank Arkada. The ballistic expert did this based on the reconstruction of the position of Kotliarevsky and his wound location that were shown by this wounded medic but the expert amazingly did not see the CNN video to make a more precise determination about the shooting location. [Lengthy trial video footage streaming of Aug 4, 2016 here.]

A forensic medical report made public during the trial confirmed that Kotliarevsky was shot in the top back part of his right thigh at a steep angle from a top to bottom direction. This wounded medic stated during this investigation experiment that he was most likely shot from the Bank Arkada based on the steep direction of his wound channel. The GPU investigation continues to deny that any “snipers” were at these locations and charges the Berkut police with wounding Kotliarevsky.

A forensic ballistic report, made recently public during the trial concluded that this medic was shot from the same 7.62×39 caliber AKM-type weapon, or its hunting version, which was used to kill Mykola-Oleh Pankiv. The forensic medical reports, made public during the Maidan massacre trial last year, also found that Pankiv was killed from a steep vertical angle. These forensic findings confirm my APSA paper finding that Pankiv was killed from the same Maidan controlled-sector, specifically the Bank Arkada and Horodetskoho Street buildings (pp. 39-40 of APSA research paper):

“Mykola-Oleh Pankiv was fatally wounded 10:07am when he was filmed in the Zelenyi Front video sitting behind a tree protecting from the Berkut side and facing Horodetskoho Street and Bank Arkada. The prosecution charges confirmed that he was shot in his chest. This indicates either of these two buildings in the Maidan-controlled area but the prosecution charged the Berkut policemen with his murder. Within several seconds of his killing, Oleksander Labetsky, who was next to Pankiv behind the same tree facing Arkada, was wounded. He said that he was shot in his inner thigh and saw the bullet on the ground nearby. His position shortly before he was shot and the wound location and its very steep direction indicate that he was most likely shot by a sniper on the roof of Bank Arkada.

At 10:17am, CNN filmed from the Hotel Ukraina a Maidan medic being shot in his right leg, but did not report in its Emmy-nominated coverage of the Maidan massacre that this direction pointed to a shooter in one of the Maidan-controlled buildings. Roman Kotliarevsky, the wounded Maidan medic, said that his position at the moment of his shooting and a steep wound in the side back area of his right thigh indicated that he was shot from the Bank Arkada or a roof of one of the buildings there, i.e. on Horodetskoho Street. He also stated that he was wounded with 7.62mm bullet and that the investigation in his shooting was dragged out and that no specific suspects were identified.”

Revelations in the Maidan Massacre trial in Ukraine go unreported in the West, interview with Ivan Katchanovski, published in Aletho News, July 22, 2015